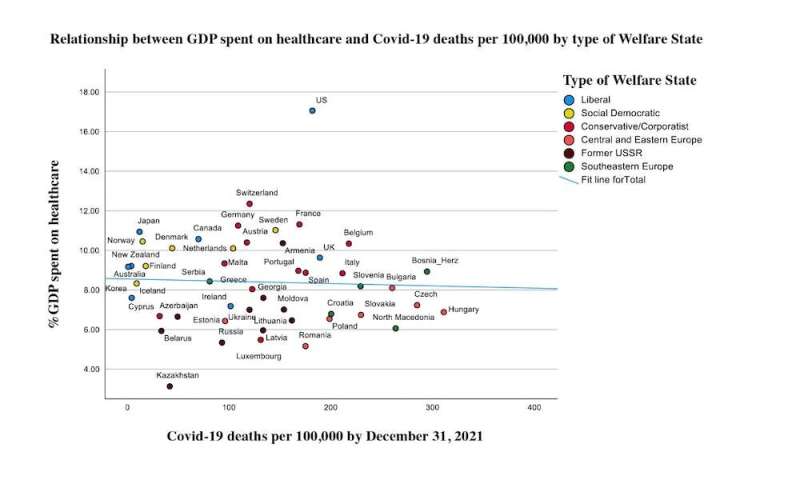 Two years ago, we examined where Canada stood compared to similar countries on COVID-19 rates. This was part of a larger study that looked at COVID-19 infections based on a country’s welfare regime: liberal, social democratic or conservative/corporatist.

Liberal states that include Canada, the United States, Ireland, the United Kingdom, Australia, New Zealand and Japan have modest systems of welfare provision. They rely on minimum state intervention.

Social epidemiology, which focuses particularly on the impact of social factors on health, has long been using welfare state variables to analyze differences in population health. Strong welfare provisions have generally been associated with lower mortality rates.

Before the fall of communism in 1989 in eastern Europe, the absence of a private market made the state the primary agent in the distribution of resources. After 1989, however, eastern Europe transitioned to capitalism.

For our research, we expanded our sample to include the former communist states. We divided them into three groups.

The third group includes the southeastern European countries that originated from the former Yugoslavia: Bosnia-Herzegovina, Croatia, Kosovo, Montenegro, North Macedonia, Serbia and Slovenia. To this, we added Albania.

We assumed that the former communist and socialist states built upon their former state-centered approaches to health care and benefit provision—and that this would translate into lower COVID-19 infections and mortality rates. But contrary to our expectations, the eastern European states fared worse than western democracies in the number of COVID-19 cases and deaths.

We examined COVID-19 cases and deaths per 100,000 people during the first three waves of the pandemic.

Excess deaths per 100,000 were also included. Excess deaths represent the difference between the number of reported deaths in a country from all causes and the number of deaths that would have been expected had there been no pandemic.

Health-care variables included the number of doctors, nurses and hospital beds, as well as variables related to health coverage—COVID-19 vaccination rates, tests and the provision of universal health care.

This was the case even when accounting for differences among countries in testing, reporting, health-care resources, pandemic policies and economic factors.

All countries started the first wave of the COVID-19 pandemic with statistically similar cases, deaths and excess deaths.

Yet despite spending less on health, central and eastern Europe countries had lower numbers of COVID-19 cases and excess deaths than southeastern European nations and former Soviet states.

This might be explained as an after-effect of capitalism. Albania and Kosovo have been experiencing what some call catastrophic out-of-pocket health expenditures—the term used when payments for health services exceed 40 percent of household disposable income.

Looking at COVID-19 deaths per million people, southeastern Europe recorded the highest numbers, even when accounting for the GDP spent on health. Southeastern European countries also have the lowest numbers of hospital beds compared to the other groups, and the smallest number of nurses and doctors per 10,000 people.

Inadequate numbers of hospital beds are a symptom of the overextended health-care system in the region, a serious problem in those countries emerging from the dissolution of Yugoslavia.

Health-care financing in former Yugoslavian countries followed an insurance model subsidized through payroll and state contributions. It was much more decentralized than in the former Soviet states, which mainly relied on government financing when part of the Soviet Union.

Throughout the 1990s, several conflicts in the former Yugoslavia also contributed to the deterioration of the population’s health. These conflicts also hindered government capacity to build and bolster their systems of health provision and delivery.

Some argued that the fall of communism, the liberalization of trade and the privatization of health care moved former Eastern Bloc countries towards western-style welfare regimes.

Our data shows, however, that the erosion of their health-care systems by the private market put these states into an impossible situation in terms of managing COVID-19 infections and mortality rates. The fall of communism was detrimental, in fact, when it came to the health and well-being of eastern Europeans.