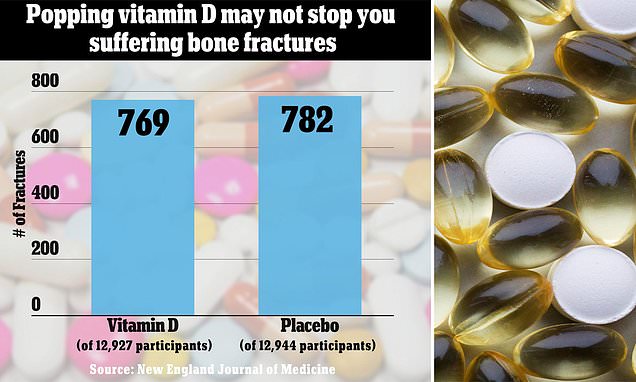 Researchers led by Harvard Medical School in Boston, Massachusetts, found that people who used the supplements were no less likely to suffer bone fractures than those who did not.

Their results go against years of doctors telling patients to take the pills to aid calcium absorption and make bones stronger. About a third of U.S. adults over 60 years old already take the pills every day.

Some scientists not involved in the research said it showed people ‘shouldn’t be popping vitamins left and right’. But others warned it did not show that people with osteoporosis should stop taking the vitamin. 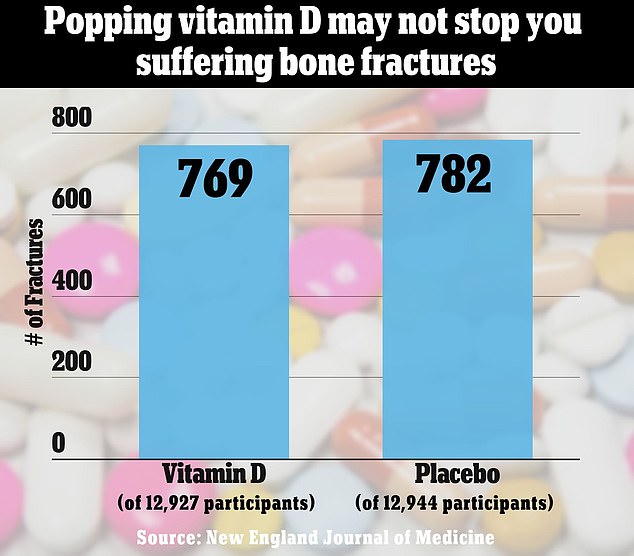 The above graph shows the number of fractures recorded in the group that took vitamin D (left), and the number that took the placebo or dummy pill (right). It shows there was no difference between the two groups, despite one boosting its levels of the vitamin. Scientists said this should ‘put to rest’ any notion that vitamin D alone can make bones stronger

The study — published Thursday in the New England Journal of Medicine — recruited 26,000 participants from the general population.

It was not limited to those with a vitamin D deficiency, low bone density, or at high risk of fractures. But testing revealed thousands of participants had what would be considered low or insufficient vitamin D levels when the study began.

Participants were near-evenly split by gender with an average age of 67 years. Some 20 percent were black, who may be more at risk of low vitamin D levels because darker skin reduces the amount of sunlight the body absorbs, key to making the vitamin.

Vitamin D is a type of vitamin that the human body gets from both diet and produces when exposed to sunlight.

What does it do?

It helps regulate the amount of calcium and phosphate in the body.

These nutrients are needed to keep bones, teeth and muscles healthy.

People who don’t get enough vitamin D can suffer from bone deformities such as rickets in children and osteomalacia (a softening of the bones) in adults.

How do I get enough vitamin D?

In the U.S. most people will get the vitamin D they need from sunlight between April and September as long as they go outside.

The body naturally produces vitamin D when exposed to sunlight.

Vitamin D is also found in foods such as oily fish, liver and egg yolks.

Do I need to take a supplement?

Medics say people should consider taking a vitamin D supplement in the winter month when sunlight is weaker.

Other people may need to take vitamin D throughout the year due to being housebound, or if they have dark skin which reduces the amount of sunlight their skin absorbs.

Children aged one-to-four years old should also be given a daily vitamin D supplement of 10micrograms(μg) of throughout the year.

What happens if I take too much?

Taking too much over a long time can lead to a dangerous build-up of calcium in the body which can weaken bones, and also damage the heart and kidneys.

Vitamin D is frequently sold in units called IU. One microgram of vitamin D is equal to 40 IU.

In the study, participants were given vitamin D3 pills to take every day. This is a type used in many supplements because it is easier for the body to absorb.

They were then monitored for five years, and questioned annually to find out if they were still taking the pills or had suffered a fracture.

Half took supplements that contained up to 800 international units (IUs) of vitamin D — which was the upper limit of the recommended daily intake.

The rest were administered with a placebo.

Results showed there was no difference in the number of fractures recorded in either group.

Among those who got vitamin D, 769 out of 12,927 participants had fractures — equivalent to six percent.

And for those who received the placebo, 782 out of 12,944 sustained fractures — also six percent.

Fractures were recorded on the pelvis, wrist, hips and in other areas.

Dr Meryl LeBoff, the skeletal health expert who led the study, and colleagues wrote in the paper: ‘Vitamin D3 supplementation did not result in significantly lower risk of fractures than placebo among generally healthy midlife and older adults.’

The study is the first large randomized controlled trial to investigate the effects of vitamin D, and marks the latest blow to suggestions it can help strengthen bones in otherwise healthy adults.

Initially, the researchers — who were funded by the Government — were meant to investigate what the optimal intake of vitamin D per day was.

Since 2011 the National Academy of Medicine — now the National Institutes of Health —  had been telling people to get up to 800 IUs a day to help prevent bone fractures.

The Centers for Disease Control and Prevention (CDC) had also been recommending vitamin D to aid with bone health.

But upon review the scientists found that most studies suggesting vitamin D supplements were ‘inadequate’, which made them pivot to asking whether the pills are really needed.

Writing in an editorial published with the paper Dr Steven Cummings, a top osteoporosis expert at the University of California, San Fransisco, said its findings should ‘put to rest’ any notion that vitamin D supplements alone can prevent fractures.

Over the years successive studies have been conflicting over whether the supplements are useful — with many failing to show whether vitamin D is actually good for bone health.

The latest study is reliable because of its large sample size and high adherence among participants.

But it does not show whether people who are deficient in vitamin D gain a benefit from the pills.

Dr Ethel Siris, an endocrinologist at Columbia University Medical Center in New York who was not involved in the study, said it had a profound impact.

She told NBC: ‘The takeaway is that in general, people shouldn’t be popping vitamins left and right. If you’re trying to prevent fractures, vitamin D alone is not enough.

‘But adequacy of calcium and vitamin D intake, in my opinion, remains a necessary part of the management of people with osteoporosis.’