EXCLUSIVE: Regular cannabis use in people’s mid-20s can cause permanent damage to brain development and legalizing the drug has WRONGLY presented it as harmless, drug safety expert says

Taking cannabis regularly in your mid-20s can cause permanent damage to the brain and its legalization in some states has wrongly suggested to many that it is safe, the head of the National Institute on Drug Abuse (NIDA) has told DailyMail.com.

Dr Nora Volkow, who has led the agency for almost two decades, warned that cannabis use among young adults was a ‘concern’ and called for more ‘urgent’ research into the ‘potential health risks’ for the age group.

Numerous studies have warned that regularly using cannabis can harm brain development — which continues into the mid-20s — and that repeated users are more likely to struggle socially and face career and relationship problems.

But it is now only fully illegal in just four states — Idaho, Kansas, South Carolina and Wyoming —, with 19 approving it for recreational use and nearly every state already giving it the green light for medicinal use — typically to treat chronic pain.

Experts warn that legalizing the drug has led to it gaining acceptance in recent years, leading more people to try it. Stress from the COVID-19 pandemic has also driven up the number of people using it. 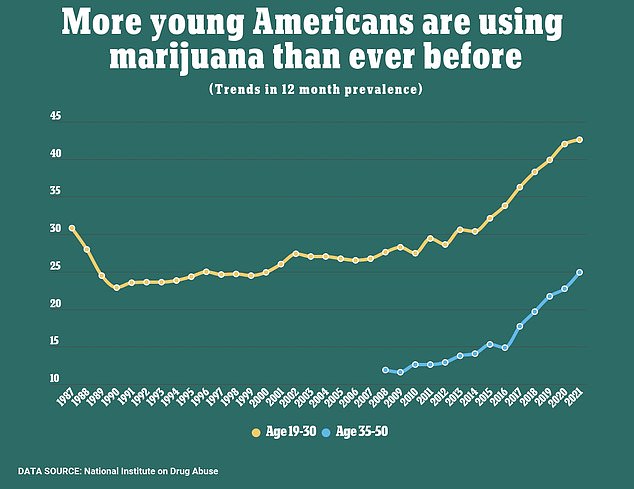 The above graph shows the proportion of young Americans surveyed who said they were using marijuana at least once a year in 2021. It reveals that levels are now at a record high

Asked about why cannabis use has surged, Volkow told DailyMail.com that a large portion was likely down to many states legalizing it for recreational purposes.

‘Legalization not only has made access to cannabis easier for its regular use, but it has also contributed to the perception that cannabis is a “safe” drug,’ she said.

‘[This] makes it more appealing to individuals who are concerned of engaging in illegal activities or activities that endanger their health.’ 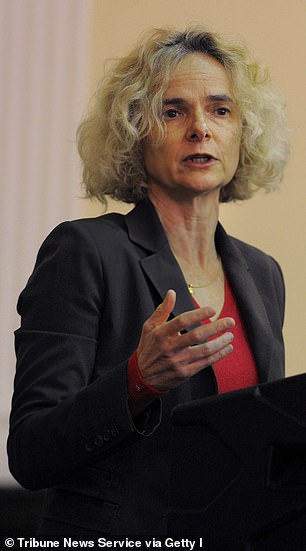 She said studies had already indicated that heavy, long-term use may be associated with cognitive impairments and psychosis — where the mind struggles to interpret reality.

It has also been linked to a higher likelihood of dropping out of school.

But these papers often include people who also regularly use tobacco or alcohol, making it difficult to conclude whether cannabis is actually behind the changes.

‘Brain development occurs into a person’s mid-20s, so cannabis use among youth and young adults is a concern,’ Volkow warned.

‘Long-term effects have been observed among individuals who report early, heavy and/or long-term marijuana use.

‘Research has also shown an association between early, regular marijuana use and onset of psychosis as well as increased risk of anxiety and suicidality.’

She added: ‘The trends that we’ve found highlight the urgent need to gain a better understanding of the potential health risks and benefits of cannabis use among young adults.’

They say it poses a ‘real risk’ to mental development, and can lead to problems with memory and attention span.

About 48.2 million Americans use marijuana every year — either smoked or taken as edibles — a figure that continues to rise as it is legalized in more and more states.

In November more states may join the 19 where it is legal as voters in Arkansas, Maryland, Missouri, Nebraska, North Dakota, South Dakota and Oklahoma will decide whether to liberalize their own cannabis laws.

Nearly every state has legalized marijuana for medicinal use — such as to treat chronic pain — which raises the chance of it being taken across the country.

Teenagers in states that have legalized cannabis use more of it and are lured by colorfully-packaged candy-like products that leave them vulnerable to higher rates of dependency, psychosis and school dropouts, researchers warn.

A DailyMail.com analysis of research focusing on California, Massachusetts, Nevada, and other states that have legalized recreational pot shows experts warning of a ‘potential explosion’ of under-aged use — and more youngsters using it than in states where it’s illegal.

They are alarmed by the weak oversight of a $30billion business and warn of a free-for-all market in which super-strength cannabis products are sold in cartoon-covered packaging that attracts youngsters, even as tobacco and alcohol firms are barred from targeting youths.

Data from the 19 states that have permitted recreational pot this past decade, as well as the 38 states that allow medical use, indicates that teens and young adults there are using stronger products more often.

Not every teen who eats a pot gummy sees their life unravel. But they are more prone to addiction and dependency than adults, and greater availability and use means more cases of anxiety, depression, psychosis and even suicide.

In November, voters in Arkansas, Maryland, Missouri, Nebraska, North and South Dakota, and Oklahoma will decide on whether to liberalize their own cannabis laws — and let windfall pot industry taxes flow into state coffers.

‘Cannabis use is more common among youth and adults in states where cannabis use is legal for recreational use,’ Renee Goodwin, who leads Columbia University’s research, told DailyMail.com.

‘Legalization has moved from a social justice issue, to the other extreme of big business commercialization without any of the same restrictions that tobacco and alcohol now need to follow.’

DailyMail.com also spoke with parents in pot-permitting states who told of their children getting hooked on teen-friendly cannabis products, suffering physical and mental health problems and messing up their education.

One of them, Mary Maas, 57, voted to legalize recreational cannabis in Washington in 2012.

But she now regrets her decision after seeing her son Adam spiral into a devastating addiction fueled by super-strength products that were worlds apart from the ‘Woodstock weed’ she recalls from the 1960s.

He started casually using cannabis in high school in Monroe, Washington, soon after the state in 2012 became one of the first to allow recreational cannabis.

His problems did not begin until his sophomore college year. Adam was smoking powerful ‘dabs’, a concentrate of cannabis that is high in the psychoactive THC, and he began experiencing paranoia, delusions and hearing voices, Mary said.

Doctors initially diagnosed him with a mood disorder. One even said cannabis would help ‘calm him down’, said Mary. But she increasingly felt dabs and the pot-infused lemonade Adam was guzzling were to blame.

As Adam’s addiction and spiraling delusions worsened, another doctor in 2019 diagnosed him with cannabis psychosis — a breakthrough moment that identified the problem and an exit strategy.

Mary and her husband John, 59, who works for the state government, spent $30,000 out-of-pocket on Adam’s addiction treatment, including repeated bouts of quitting and relapsing.

Progress is slow and arduous, but there is light at the end of a dark tunnel.

Mary thinks back to 2012, when she was among the 55.7 percent of Washingtonians who voted to legalize the production, possession, delivery and distribution of recreational marijuana for over 21s.

‘I had no idea what they were legalizing. I thought it was going to be the Woodstock weed,’ Mary told DailyMail.com, referring to the 1960s hippy movement.

‘I didn’t feel like it was a dangerous drug at that point.’

Now, she looks at the potent oils, vapes, dabs, drinks and gummies sold at a growing number of dispensaries, as well as the down-and-outs living in tents under Seattle’s I-5 highway, and urges other states to heed Washington’s lessons.

‘They’d better watch out,’ she said.

Another mother says she took her family out of Colorado once it became the ‘ground zero’ for cannabis expansion. Another, from Oregon, has watched her 16-year-old daughter mess up school and turn to dealing to finance her addiction.

Monday’s NIDA report was based on a survey of 5,000 youngsters from a nationally representative group of 19 to 30-year-olds.

It found 43 percent of respondents said they had used marijuana at least once last year, up a quarter on the number a decade ago.

Some 29 percent also admitted to using it every month, while 11 percent said they used it daily — defined as at least 20 times a month — double the level a decade  ago.

NIDA’s annual survey also showed how the use of hallucinogens — like LSD and MDMA — had hit an all-time high among young adults. One in 12 said they had used the drugs at least once last year, which was double the level from five years ago.

Alcohol remained the most popular substance used, however, with eight in ten saying they had it at least once in the past year.

Experts have warned DailyMail.com of a ‘potential explosion’ of underage cannabis use and raised the alarm over the weak oversight of a $30 billion business. They also raised concerns over a free-for-all market in which super-strength cannabis products are sold in cartoon-covered packaging.

‘Cannabis use is more common among youth and adults in states where cannabis use is legal for recreational use,’ Renee Goodwin, who leads Columbia University’s research, told DailyMail.com.

‘Legalization has moved from a social justice issue, to the other extreme of big business commercialization without any of the same restrictions that tobacco and alcohol now need to follow.’

The above shows cannabis use across American states. Some 19 have legalized it for recreational use, while nearly each now allows it to be used for medicinal purposes

Gummies, oils and vape cartridges are sold in bright packaging that appeals to teens, even while the products are for over-21s. In many cases, dispensary shopfronts and trucks are decked out similarly.

‘State, county and local legislatures have the power to regulate that,’ said Goodwin, a psychiatric and substance use epidemiologist.

‘It is generally easier to do it before commercialization happens than to look back and undo it.’

For Goodwin, Shi and others, research and regulation is moving too slowly compared to the rapid pace of legalization.

Data from the 19 states that have permitted recreational pot this past decade, as well as the 38 states that allow medical use, indicates that teens and young adults there are using stronger products more often.

It comes after a study revealed yesterday found that using cannabis can raise the risk of developing heart problems in patient.

A Danish research team from Gentofte University, in Copenhagen, found that those who regularly used the drug to manage chronic pain were at a 74 percent higher risk of developing arrhythmia — an issue where a person’s heart beats at an irregular pace.

Researchers, who published their findings Monday in the European Society of Cardiology, gathered data from nearly 5,000 patients who were prescribed cannabis to manage pain symptoms.