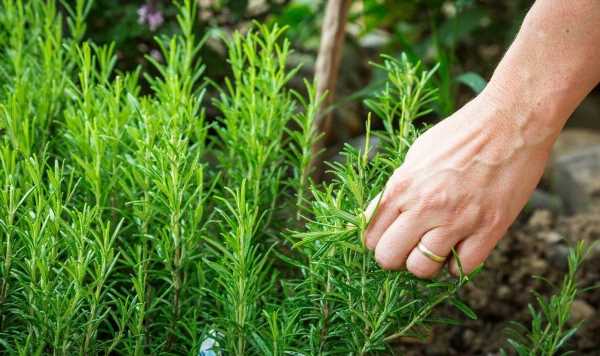 Cancer symptoms: Top 14 early signs to look out for

Nutrition, but more specifically the intake of fruits and vegetables, has been reported to have a major role in the prevention of cancer. Herbs are among the most potent plant-based foods because they offer a wealth of compounds needed to fight off disease. Rosemary and thyme, specifically, may be some of the best herbs for the prevention of cancer, due to their tumour-suppressing properties.

In 2019, a body of research published in the International Journal of Molecular Science evaluated the anti-tumour effects of thyme.

It found that in mice, thyme at two different concentrations reduced the volume of tumours by 85 percent and 84 percent compared to the controls, respectively.

In rats, the researchers observed reductions in the frequency of tumours by about 53 percent compared to controls.

Many of these effects have been put down to thymes’ terpenoids, a group of phytochemicals that can work as antioxidants and may protect cells from cancer.

The authors noted: “It has continuously been demonstrated that dietary plant products affect the development and progression of cancer disease.

“It is well known that phytochemicals with antioxidants, anti-inflammatory and immuno-modulatory activity can reduce the growth and spread of cancer.”

The researcher J. Scott Smith was conducting a project at Kansas university when he found out about rosemary’s strength against carcinogenic compounds known as heterocyclic amines (HCAs).

His research suggested that adding rosemary extracts to beef patties reduced the levels of carcinogenic compounds like HCAs by 30 to 100 percent.

The results tied in with previous research showing that marinating steaks with certain herbs and spices also reduced HCAs.

He said: “Put a little bit on the surface. Rosemary extract should have much of an aroma to them.

“Most people don’t want a rosemary-flavoured burger. So if you get the extract you don’t really know it’s there.”

According to the Ohio State University, rosemary is rich in carnosol, a phytochemical that can slow cancer cell growth, strengthen immune functions, limit the production of cancer-related hormones and work as an antioxidant.

Several studies have shown that rosemary inhibits the growth of tumours by preventing cancerous cells from replicating.

In 2011, a meta-analysis published in the Critical Reviews in Food Science and Nutrition examined the protective effects of rosemary on colorectal cancer and other types of cancer.

The researchers noted that there was extensive literature from animal and cell studies demonstrating the anticancer potential of rosemary extract and its constituents.

Aside from carnosol, other compounds like carnosic acids, rustic acids and rosmarinic acid, have all proven useful in the fight against cancer.

The researchers added: “This is evidenced by the ability of rosemary to suppress the development of tumours in several organs including the colon, breast, liver, stomach, as well as melanoma and leukaemia cells.

“The results suggested that the different molecular targets modulated by rosemary and its active constituents are useful indicators of success in clinical cancer chemo-prevention trials.”

In 2014, research published in the PLOSOne reinforced these findings after showing that rosemary extract given orally significantly suppressed tumour growth by 46 percent in mice.

Rosemary and thyme are among those herbs and spices with basil, mint, sage, savoury, marjoram and oregano, which are all rich in antioxidants.