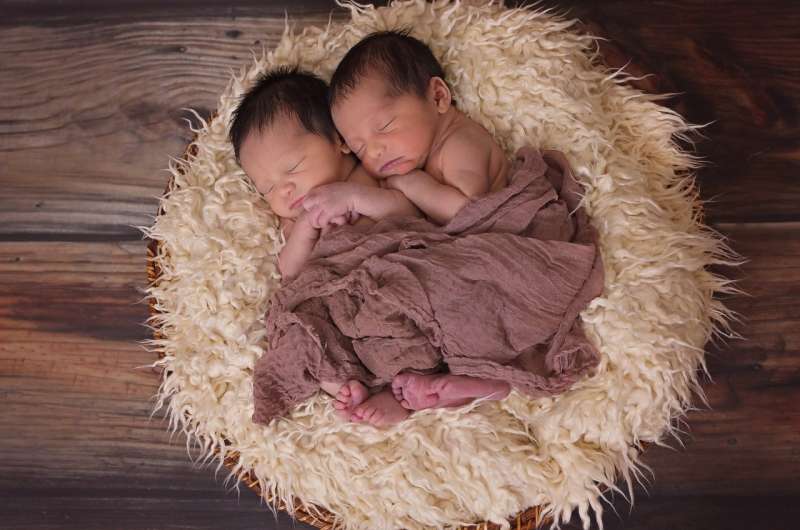 Twin births aren’t exactly common. In humans, they occur in one to three percent of all births.

Previous studies of the phenomenon have concluded that mothers of twins are more fertile than other women. This is because on average they give birth more often than other mothers. They have been called “supermothers” and considered more robust and as having better health.

Now an international research group has found that twin mothers are not actually more fertile than other women.

“On the contrary, when a woman gives birth several times, the chances increase that at least one of these births will be a twin birth. Twin mothers aren’t supermothers, but have been given more chances,” says Gine Roll Skjærvø, a senior engineer and human behavioral biologist at NTNU’s (the Norwegian University of Science and Technology) Department of Biology.

The research group reviewed 100,000 European births from the pre-industrial era, so the data set is large.

In the pre-industrial era, “we had natural fertility with big family sizes. Contraception or other methods to control the number of children weren’t available, and assisted reproductive technology didn’t exist,” says Skjærvø.

She and Eivin Røskaft, a professor in the same department, were responsible for the Norwegian contributions to the international research group. Skjærvø contributed life history data gathered from parish records in Soknedal and Smøla in Central Norway. She also used this data while working on her doctorate. The results were recently published in Nature Communications.

Greater health risks, so why do twins exist?

Twin births occur among people all over the world, despite the fact that they are associated with a much greater health risk for both mother and child before, during and after birth.

“Due to this increased cost, it would seem that natural selection and evolution have selected against twin births,” the research team said. But, they wondered, why haven’t these same mechanisms removed them completely?

A common explanation is that the risk of death associated with giving birth to twins is partly offset by higher fertility. When things go well, you have twice as many offspring to pass on your genes.

The idea is that women who are more fertile than average more often release two eggs during ovulation. In that case, giving birth to twins is a sign that you are more fertile. Many studies have supported this theory.

But the new study finds errors in the previous study methods and analyses and raises the question of what actually comes first.

“Previous studies are problematic because they can’t tell us whether mothers with twins give birth more often because they’re especially fertile, or because giving birth more often increases the chance that one of these births will be to twins,” explains lead author Alexandre Courtiol at the Leibniz Institute for Zoo and Wildlife Research in Germany.

The new results show that women who give birth to twins are not unusually fertile. The previous research mixed up cause and effect.

“If a mother gives birth more often, it’s more likely that one of these births will be to twins—just like you’re more likely to win if you buy more lottery tickets, or to be in a car accident if you drive a lot,” says Ian Rickard, a lead author from Durham University in the UK.

When taking into account this lottery effect, the researchers find that mothers of twins actually give birth less often than others, not more often. This new finding is in stark contrast to previous ones.

“All this data is from old parish records that have been digitized,” says co-author Virpi Lummaa from the University of Turku in Finland.

Co-author François Rousset from the Institut des Sciences de l’Evolution in Montpellier, France adds, “To avoid the statistical trap that other studies have fallen into, we also had to use advanced statistical procedures.”

The trap is so common that it has its own name: “Simpson’s paradox.”

Important info for the healthcare system

The relationship between twin births and fertility is not just an academic question. It is also of interest for healthcare services.

Studies that try to understand how to increase women’s fertility have compared mothers with and without twins. But Erik Postma, a co-author from the University of Exeter in the UK points out that such study designs overlook the factors that can explain why a woman is fertile, and thus prevent us from understanding more about the differences in physiology between women who give birth to twins and those who don’t.

In short, uncritically comparing groups of women with and without twins can trick us into believing the opposite of what is really true. These groupings may either hide the effects of twinning and fertility genes where they exist, or vice versa, create the illusion of these if they do not exist.

A lot that we don’t yet know

“There’s still a lot we don’t understand about twins. But our study suggests that twinning has not been eliminated by natural selection for two reasons,” Courtiol says.

The first reason is that twin births can be a consequence of two eggs being released during ovulation. This compensates for the increased chance of miscarriage with increasing age, and benefits all but the youngest mothers.