Health officials recall 260,000 packs of blood pressure pills because they ‘may contain a cancer-causing chemical’ – and some have been on the market for TWO YEARS

More than a quarter of a million packs of blood pressure drugs have been recalled in the UK.

Government agency the Medicines and Healthcare products Regulatory Agency today issued a warning about losartan pills made by the company Accord.

Some of the drugs have already been on the market for two years, after first going to market as long ago as February 2017.

It is the latest in a line of drug recalls of sartan-type medications, which may have been exposed to cancer-causing chemicals in factories in China and India.

Today’s is the fifth recall by the MHRA – patients are urged to not stop taking their medication unless told to by their doctor or pharmacist. 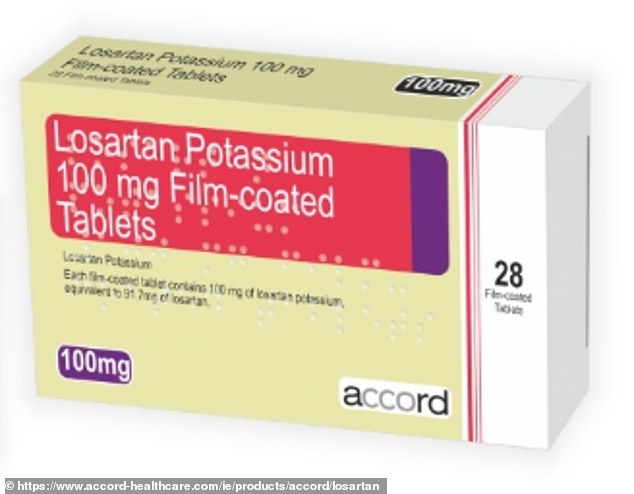 The recall affects Losartan Potassium Film-coated tablets, both 50mg and 100mg, which come in packs of 28.

A total of 264,797 packets are included in the batches, amounting to a possible total of 7.4million tablets.

Other similar drugs including irbesartan and valsartan have been recalled over the past year amid concerns about dangerous chemicals getting into them.

These losartan pills have been called because they may contain the chemical NMBA, full name N-Nitroso-N-methyl-4-aminobutyric acid.

NMBA, which is classed as cancer-causing and is found in cigarette smoke, was first discovered as a contaminant earlier this month.

The US Food and Drug Administration found traces of it in losartan pills being manufactured by Hetero Labs Ltd in India, but it’s unclear whether that company is implicated in the UK recall.

July 2018: MHRA recalls seven batches of valsartan over concerns it may have been contaminated with cancer-causing chemical in a Chinese factory.

November 2018: MHRA recalls a further 31 batches of valsartan made by the companies Teva and Mylan.

March 2019: MHRA recalls three batches of losartan, made by Accord, because of potential NMBA contamination.

Other medicines have been involved because of concerns over different chemicals, namely NDMA and NDEA, both of which could raise the risk of cancer.

There have been four recalls in the US and UK so far this year, and numerous other issues with the medicines in 2018.

Contamination recalls – which usually only concern pharmacists who should stop giving out the drugs – have even led to shortages in the US.

The FDA was this month rushing to approve a new generic version of the blood pressure drug valsartan because as many as two million people have been exposed to the contaminated drugs over the past year.

It is not known how many people in the UK have been affected.

But the MHRA said the recall is ‘a precautionary measure’ and there hasn’t been any evidence of the contamination actually harming patients.

‘Our priority as regulator is to make sure the medicines you and your family take are effective and acceptably safe,’ said Bernadette Sinclair-Jenkins, spokesperson for the MHRA.

‘This recall shows we are continuing to investigate potential contamination of sartan containing medicines.

‘There is no evidence at present that medicines containing NDMA, NDEA or NMBA have caused any harm to patients and this recall is a precautionary measure.

‘Because of the risk associated with suddenly stopping high blood pressure medication, continue to take your medicines as prescribed by your doctor.

‘Please speak to your doctor or pharmacist if you have any concerns about your medicine.’

2012 – The blood-pressure medication valsartan is thought to have been contaminated with the cancer-causing, rocket-fuel chemical NDMA as far back as 2012.

European regulators warned last year the medication’s main manufacturer in China – Zhejiang Huahai Pharmaceutical – changed its manufacturing process seven years ago, which may have been to blame.

July 5, 2018 – The UK recalled the drug over growing concerns and many EU authorities then followed suit.

The European Medicines Agency said it was working to establish how long, and at what levels, patients might have been exposed to NDMA.

July 17 – The US Food and Drug Administration ordered a ban on valsartan’s prescription.

July 30 – China’s National Health and Family Planning Commission said the drug must not be used for diagnosis or treatment.

The government-run body issued an alert over four batches of the medication and pulled the products – made by Actavis, now known as Accord – as a ‘precautionary measure’.

January 23, 2019 – Prinston Pharmaceutical Inc, a medicine company in the US, announced it was voluntarily recalling irbesartan and irbesartan HCTZ after finding higher levels of NDEA in them than the Food and Drug Administration permits.

March 12, 2019 – The Food and Drug Administration in the US rushed to try and approve new generic versions of valsartan amid a shortage caused by contamination problems leading to recalls.

March 21, 2019 – MHRA recalls three batches of losartan, a blood pressure medication, amid concerns it could be contaminated by a chemical known as NMBA, which has only surfaced this month in a factory in India.