Everyone these days seems to have a podcast about how therapy has saved their life. Mental health has, thankfully, come out of the cupboard. Celebrities and royalty alike speak openly about the treatment that has helped them overcome unexamined grief, panic attacks or borderline personality disorder.

Still, when actor Jonah Hill, the star of Superbad and The Wolf of Wall Street, put out a documentary about his fruitful relationship with his therapist two weeks ago, it came with a stark difference. 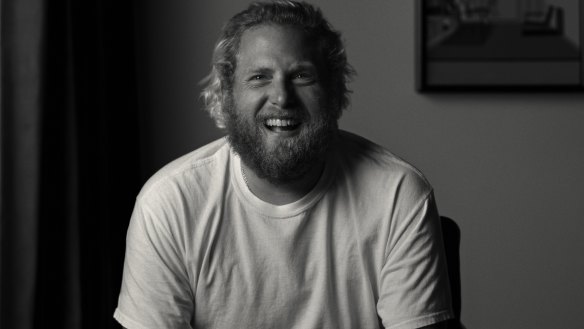 “Meeting you and starting this process was out of desperation to get happier,” says actor Jonah Hill, about his therapist, in a new documentary about their relationship. “I just had no healthy self-esteem.”Credit:Stutz / Getty Images

It wasn’t just Hill’s raw admission in Stutz that he “had no confidence as a human being”, when he began work with his current therapist five years ago. (He feels much better now.)

Rather it was Hill’s assertion that the “teachings” his therapist, Dr Phil Stutz, gave him – that helped him gain confidence, manage panic attacks, and recover from the death of his older brother – just might help other people “make their own lives better”, too. Regardless of what they’re going through. (Stutz, an LA-based psychiatrist whose lessons include teaching clients to accept that they can’t avoid pain, uncertainty, and constant work, agrees.)

Stutz, makes for great entertainment. (Adversity, says Stutz in a Brooklyn accent straight out of a Martin Scorsese movie, is an invisible force that wants to “block your evolution, block your potential, f–k up your s–t”.)

But are Hill and his therapist right? Are there certain psychological tools or tips that can help all of us, regardless of our circumstance, age or particular challenge, to be happier?

“The question is, ‘Why am I wired the way I am?’” says Lissy Abrahams, a Sydney-based psychotherapist. It is a foundational question each of us should ask ourselves, she says. Because how we were cared for when we were small – if our needs were tended to, or if they weren’t, for example – primes us to respond in a certain way to other people later on in life, says Abrahams, whose book Relationship Reset came out in July.

This means we might enter into relationships as adults primed, unbeknownst to others, to feel rejected, out of control, or unworthy.

“So, if I [am wired to] feel unworthy, my partner displaying [sexual] desire for me might be part of what’s critical to me to feel OK,” says Abrahams, explaining the genesis of a typical overreaction that leads to conflict. “So what happens if they don’t want to [have sex] for a month? If they’re not inclined? Does it mean I’m not good enough?

“We have this expectation that they [another person] are going to play a role that keeps us safe. And when they don’t, we can get very upset.”

“We have this expectation that they [another person] are going to play a role that keeps us safe. And when they don’t, we can get very upset.”

The problem is other people don’t know this about us. They can’t read our minds. Just as we can’t read theirs. To simply understand this inherent gap between the way we are all primed to see the world is the key to having more harmonious relationships, says Abrahams.

“This is exactly what fixes marriages,” she says, adding that it also improves our relations with everyone else in our life. It enables us to have greater compassion for each other, and therefore greater tolerance.

That, and realising it isn’t another person’s job to make us feel safe. Yes, we have the right to expect that our basic needs like respect, kindness and connection are met in a relationship. But it isn’t a partner’s job to fix something inside of us that’s broken, says Abrahams. “I believe for us to really be OK in life, we have to find a way to be OK in ourselves,” she says. (She offers two questions to ask yourself to determine if you’re OK: “Would I want to date me?“, and, “If I was dating now, would I pretend I’m not like this?”)

People’s lives are also improved immeasurably when they learn to identify, and then express, exactly what they’re feeling when they are close to tearing their hair out, says clinical psychologist Dr Rowan Burckhardt, director of the Sydney Couples Counselling Centre.

This might sound ridiculous. Your partner keeps coming home late from work, even though you’ve repeatedly asked them not to. So you let rip, “You don’t give a crap about me!” Or your staff member continually fails to complete the to-do list you’ve given them. And so forth.

You’re angry, right? Well, yes and no, says Burckhardt, a clinical psychologist who treats couples and individuals of all ages.

Sure, you might be angry. But that’s only a “secondary” emotion. Underlying that emotion, he says, is a “primary” and more vulnerable emotion, like sadness, anxiety or fear. This is the first emotion you feel when something happens.

“If you don’t know you’re feeling anxious when your partner is coming home late, how will you even know what to express to your partner?” says Burckhardt. “[But if you do, and you express it] the person can go, ‘Oh my god. I’m so sorry you felt left alone. Actually, I was just working really hard because I want to give you that holiday you keep talking about.’ The person hears that, and thinks, ‘Oh my God, how could I have thought they were uncaring?’” If it’s a work situation, identifying your primary emotion can help you ask for structures or boundaries be put in place to attend to them.

Another tool that helps everybody?

“The biggest tip I give people is usually to write out everything you want to do,” says clinical psychologist Tamara Cavenett, adding that this helps everyone from high school students in their final year stressed about exams, to middle-aged mums and dads struggling to juggle parenting and work.

It’s immediately calming. “You see you usually have the time to get the most important things done.”

Another tip that helps anyone who feels bad about themselves, for any reason?

Cavenett often asks clients if what they say to themselves in their head is how they’d speak to a friend.

“We’re a lot more harsh on ourselves,” says Cavenett, noting that many of us have unconsciously internalised the criticisms we received from other people when we were younger.

“The scary thing is that at times, these [inner] voices have become such an accustomed way of thinking that you stop questioning it,” says Cavenett. “You can live your entire life based on this self-belief, it can cause all sorts of issues. Often with a client, we get them to see things differently.”