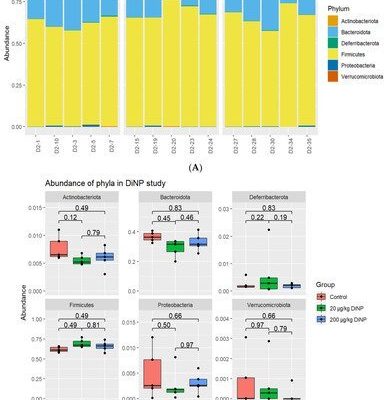 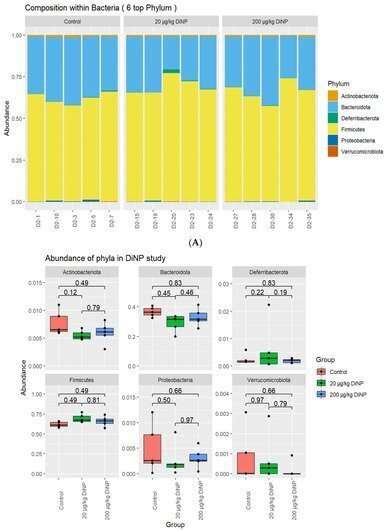 Phthalates are commonly used to make products—including artificial leather, footwear, plastic food packaging, and personal care products—more flexible or stable. In particular, di-isononyl phthalate is incorporated in vinyl clothing and construction materials. However, scientists do not completely understand if or how it harms the human body. To do so, researchers looked at the effect of DiNP on the colonic environment in a new study.

DiNP is used as a replacement for di(2-ethylhexyl) phthalate, another chemical that is commonly added to plastics to make them flexible. “The problem is that although we know DEHP is associated with female reproductive problems, we don’t know if DiNP harms us,” said Karen Chiu, a graduate student in the Flaws group.

To understand whether DiNP is harmful, the team used different DiNP doses to test how it affects the colon walls, the immune system, and colonic microorganisms. “We looked at a dose that occupational workers might encounter (20 µg/kg), and another higher dose (200 µg/kg) that infants are exposed to,” Chiu said. “Surprisingly, infants are exposed to higher levels [of DiNP] because they crawl on carpets and mouth their toys, which contain these phthalates.”

The researchers used female mice that were either dosed with corn oil as a control or different doses of DiNP. After ten days, the mice were euthanized and their colon and its contents were examined. Although the chemical did not affect the length or weight of the colon, it did change the tissue structure by causing inflammation. “In the DiNP treatments, we also saw tissue damage which was caused by an infiltration of immune cells,” Chiu said. Normal colon sections have intestinal folds and thick muscle layers. However, the colon of mice that were exposed to 20 µg/kg DiNP or 200 µg/kg DiNP had no folds and abnormal muscle layers of varying thickness.

Although it is unclear why immune cells enter the region, the researchers confirmed their observations by also measuring the chemicals that are released by these cells. “We measured different markers that are associated with inflammation, such as soluble intercellular adhesion molecules and tumor necrosis factors, and saw that they were different from the controls,” Chiu said. “Since they all have different roles, it is unclear why some inflammatory markers increased and others decreased.”

“These classifications are still relatively high level, and you need to look at the species or strains to determine the function of these identified microbes,” Chiu said. “It’s like reporting to your friend that you have a pair of Nike shoes, but what type of Nike is it? There are Nikes made for running, cross-training, basketball, or soccer. Once you know the specific Nike, you can determine its function.”

Interestingly, the researchers were also able to identify three microbes that were capable of growing on DiNP: Desulfitobacterium hafniense, Paenibacillus barengoltzii, and Proteus mirabilis. Proteus mirabilis is usually found in individuals with urinary tract infections. “The next step is to find the enzymes that break down DiNP and see whether they can alter the hormone levels in mice. The results would give us further insights into how DiNP affects the colon,” Chiu said.

“We also want to look at what long-term exposure to DiNP can do because people are chronically exposed to it and in this study we only looked at short-term exposure,” said Jodi Flaws (EIRH co-leader/MME), a professor of comparative biosciences. “Since we know DiNP is a reproductive toxicant, we are also interested in looking at whether the changes in the gut are causing reproductive problems.”