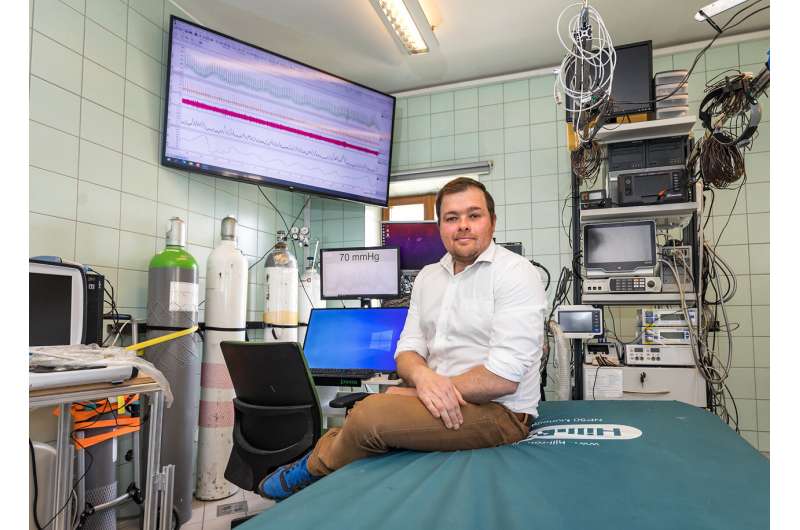 Both hot and cold environments trigger a stress response in the human body and can lead to cardiovascular problems. Physiologist Justin Lawley from the Department of Sport Science at the University of Innsbruck and colleagues have recently investigated both factors in scientific studies. The results, which were published in the journals Scientific Reports and Experimental Physiology, are especially interesting in light of the current multiple global crises.

The climate and energy crises are currently among the greatest challenges of our time and are having a direct physical effect on people’s health. For example, the climate crisis is causing more frequent, longer and more intense heat waves, which are responsible for more deaths than natural disasters. Moreover, the energy crisis is causing a rise in energy costs and forcing many households to heat their homes less often or not at all.

The physiological responses to a simulated heat wave and cold ambient temperatures have now been investigated by Justin Lawley, together with his research group, the Laboratory of Exercise and Environmental Physiology, and international scientists in two studies—the focus was on the cardiovascular system. “In both studies, we replicated real-world environmental temperatures the body might be exposed to and were able to show physiological responses that could help explain known seasonal variations in cardiovascular deaths,” explains Lawley.

“We used a protocol in this study that simulates current heat wave conditions in combination with orthostatic stress, which means changing posture, to determine cardiovascular and thermoregulatory stress in industrial workers,” Lawley says. The results show that even relatively mild heat waves cause an increase in core and skin temperatures and an increase in skin blood flow. While these physiological reactions help the body from overheating at rest, during standing the body must now defend both internal temperature and maintain blood pressure to prevent fainting, which puts an extra strain on the cardiovascular system.

Interestingly, many of these responses persisted after the heat wave was over, suggesting a residual effect of the heat wave. “These responses reflect the stress on the cardiovascular system that industrial workers face during heat waves, which can lead to heat illness, fainting and even potentially death due to accidents or serious medical complications in persons with underlying cardiovascular disease,” Lawley says.

In another study, Lawley, along with a team of eleven researchers, examined the impact of mild cold exposure on the cardiovascular system, with a specific focus on what mechanisms are responsible for the increase in blood pressure. In addition to researchers from Innsbruck, scientists from Great Britain and Canada were also involved.

Since preventing a rise in blood pressure in the cold is important, the study aimed to examine if the rise in vessel resistance (i.e. vasoconstriction) is due to a change in blood flow in the skeletal muscles or simply the skin. In a laboratory at the Department of Sport Science at the University of Innsbruck, the researchers cooled the skin temperature of 34 test subjects from a normal 32 to 34 degrees to about 27 degrees with ten degrees cold air—on one occasion the entire body was cooled, on another only the face was cooled.

Thus, the team was able to show that the mechanism(s) responsible for the rise in blood pressure during cold exposure depends on which parts of the body are cold. These data are important to educate the population about preventing the potential negative consequences of cold exposure because contrary to the perception of many, cold is even more dangerous to the body than heat.

“It doesn’t take sub-zero temperatures—as you might think—to cause serious reactions in the body, which will become common for many people unable to heat their homes during the energy crisis. While people typically know to wear warm clothing to protect the skin of their body, arms and legs, we were able to show that protecting the face is equally important even in a mild ambient temperature of ten degrees,” Lawley says.

Both studies show that climatic conditions can have extreme effects on our cardiovascular system. While negative health aspects triggered by heat waves will increase due to the climate crisis, it is particularly surprising that even cold temperatures around 10 degrees can have significant negative effects on our cardiovascular system even in young people who were part of these studies.

Future studies extending these findings to our aging population and those with pre-existing medical conditions will certainly help mitigate the risk of these new environmental challenges.