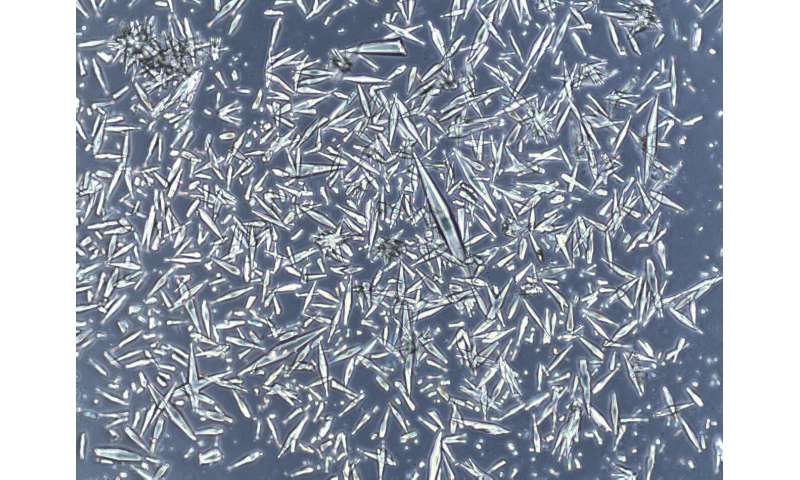 Belgian research groups from the VIB, Ghent University, Ghent University Hospital, and the biotech company Argenx have solved a century-long puzzle about the presence of protein crystals in asthma. Normally, proteins do not crystallize in the body, but there are some instances when this process does occur. Charcot-Leyden crystals are made from the protein galectin-10 and were discovered in the airways of asthmatics as early as 1853.

However, the crystals have been largely ignored by scientists, and their actual link to disease remained unknown. The Belgian research groups have now established that the crystals are highly abundant in airway mucus, stimulate the immune system and promote the inflammation and altered mucus production that is often seen in the airways of asthmatics. Together, the academic and company scientists also developed antibodies that can dissolve these crystals to reduce key asthma features. Such antibodies could be first-in-class therapeutics that reverse protein crystals and treat asthma and other chronic inflammatory diseases of the airways. The study is published in the leading journal Science.

In 1853, Jean-Martin Charcot at the renowned Salpêtrière Hospital in Paris reported detailed sketches of bipyramidal crystals that he had observed in the sputum of patients suffering from asthma, an observation also made by Ernst von Leyden in 1872. These crystalline deposits became widely known as Charcot-Leyden crystals (CLCs) in the medical world.

Since then, they have been described in widespread chronic allergic and inflammatory diseases such as asthma, bronchitis, allergic rhinitis and rhinosinusitis. It was, however, only during the last couple of decades that scientists confirmed the content of CLCs was made up of galectin-10, finally settling debates that lasted for nearly a century and a half. Galectin-10 is one of the most abundant proteins in eosinophils, which help to mount an inflammatory response in humans. Surprisingly, Gal10 remains largely soluble in eosinophils and it only forms crystals once it has been released as part of an immunological defense. The function of Gal10 also remained elusive.

Do these crystals cause harm?

Spearheaded by Emma Persson, Kenneth Verstraete, and Ines Heyndrickx, the team of researchers set out to test a longstanding unresolved hypothesis: Do CLCs stimulate immunity in the lung and contribute to excessive inflammatory responses leading to disease?

Prof. Bart Lambrecht (VIB-UGent) said, “Every medical doctor learns about Charcot-Leyden crystals during medical training and everybody associates such crystals with the presence of eosinophils. They are very often found in the sputum of asthma patients, particularly in those patients with severe disease. Yet nobody really knew what these crystals were doing and why they are there in the first place. By analogy with gout, where uric acid crystals cause a very painful attack of joint inflammation, we reasoned that Charcot-Leyden crystals might also cause harm in the lungs of asthma patients.”

The scientists overcame many technical challenges to test this idea. They had to find a way to produce millions of crystals of Gal10 in the laboratory for research purposes, and establish that these were identical to CLCs found in patients. The researchers used patient-derived crystals to determine the three-dimensional structure of Gal10 down to the atomic scale. This provided a long-sought answer confirming that experimentally produced CLCs are identical to patient-derived CLC.

Prof. Savvas Savvides (VIB-UGent): “This is the first time in biochemical and medical history that patient-derived protein crystals are studied at atomic resolution. It is utterly remarkable that such microscopic crystals, which are merely a few micrometers in size (about a thousandth of a millimeter) survived the laborious and harsh experimental path that started in a hospital operation theater and ended at a specialized X-ray beamline of a European synchrotron radiation facility. And to top it off, they yielded data that led to a beautiful three-dimensional structure of the protein molecules inside them.”

The researchers found that Gal10 induced a fully blown immune response only when it was in the crystalline state. In solution, Gal10 was harmless. Most importantly, crystalline Gal10 in the form of Charcot-Leyden crystals induced key features of asthma, including the production of altered mucus that is a big problem for most asthmatics. Thus, the study already delivered a major breakthrough with crystal clear conclusions.

Looking for a solution

The group then studied if interfering with CLC formation would be a therapeutic option for asthmatics. This is where Argenx, a Ghent-based biotechnology company, stepped in. The combined teams developed antibodies that can react specifically against CLC. Remarkably, the antibodies were able to dissolve CLC within minutes in a petri dish in the lab and within a few hours in the mucus of patients (also in vitro). Use of these antibodies in mouse models of asthma led to a strong reduction of lung inflammation, lung function alterations and mucus production.

Prof. Savvides said, “It was like a ‘now you see it, now you don’t’ display of molecular magic. I have spent 25 years learning and agonizing about how to grow protein crystals for structural biology, and all of a sudden, I was seeing protein crystals dissolve in real time. And to top it off, we also got to visualize how these antibodies actually do their magic by determining their crystal structure in complex with their antigen.”