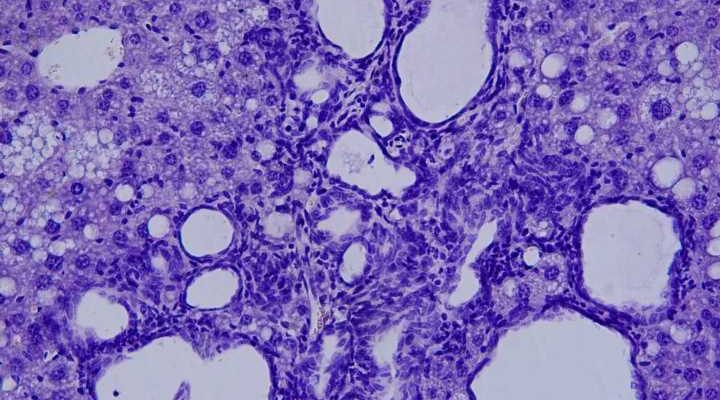 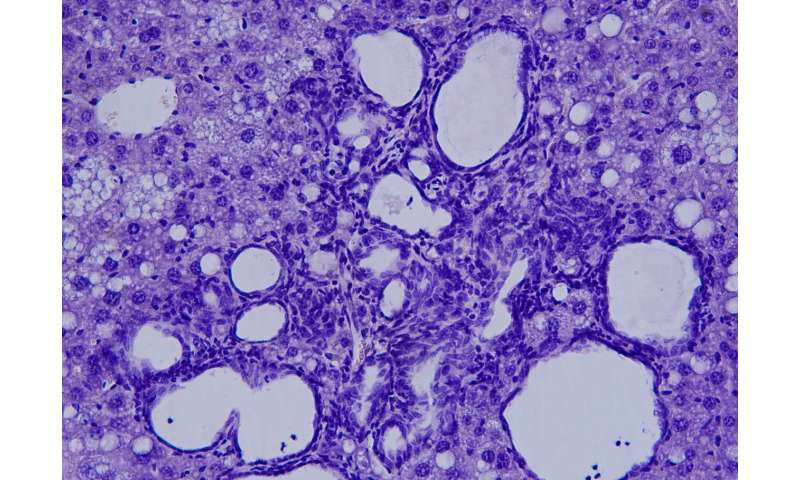 Researchers at the Centro Nacional de Investigaciones Cardiovasculares (CNIC) have discovered a mechanism controlling the development of a type of liver cancer. This study, published today in the Proceedings of the National Academy of Sciences (PNAS), partly funded by the Spanish Association Against Cancer, has identified a protein that, when blocked, dramatically reduces the impact and progression of this type of cancer, called cholangiocarcinoma. This work was made possible because CNIC researchers have developed an animal model where alterations in the production of bile acids have been proved to cause this type of tumor.

Liver cancer is the fifth most frequent cancer and the second main cause of cancer-related deaths worldwide. Cholangiocarcinoma, the second most common liver cancer, starts in the bile ducts and has a clinically symptomless progression. Because there are no early markers, most patients are diagnosed at an advanced stage and die due to the spread of cancer or metastasis.

In this study, led by Guadalupe Sabio, Alfonso Mora, and Roger J. Davis, mice whose livers do not contain the JNK1 and JNK2 proteins have been bred. “These proteins are activated when we overeat and are partly responsible for excess fat being stored in the liver (i.e. – fatty liver or steatosis), and for the development of insulin resistance,” explained Dr. Sabio. The proteins are, therefore, “very significant for obesity and diabetes studies,” she added.

Researchers also found that these two proteins control the production of bile acids in the liver, which are essential for proper fat digestion and the absorption of fat-soluble vitamins (A, D, E and K). “A lack of JNK1 and JNK2 in the liver leads to changes in the enzymes responsible for metabolizing cholesterol and bile acids,” said Dr. Mora. In the analyzed mice, “we have observed excess blood levels of bile acids.”

Researcher Elisa Manieri explained that, over time, this accumulation of bile acids has a “toxic effect” on the liver. Bile ducts begin to proliferate excessively, triggering the formation of multiple cholangiocarcinomas with clinical markers, which are remarkably similar to those of patients with this type of cancer. In fact, “it is the first time that we have found the increase of a cholangiocarcinoma patient marker in mice models.” This indicates that these mice could offer new clues to assess novel cholangiocarcinoma therapies.

This model has allowed CNIC researchers, in collaboration with the laboratory of Roger J. Davis at the University of Massachusetts School of Medicine (USA), to find a protein playing a key role in this tumor process, PPARα. The protein regulates the metabolism of bile acids and liver lipids. According to Dr. Mora, the mice lacking PPARα “have significantly fewer tumors or none at all.”

Although it is still not known if these data can be extrapolated to human patients, the fact that this first animal model exists will allow the study of a type of tumor that can still only be diagnosed in its very late stages, when metastases have already happened.

Earlier studies had shown that JNK blockading prevented the development of steatosis in the liver. This is why a variety of clinical trials with inhibitors of these proteins have been launched. The researchers believe that the new findings are a “wake-up call” for these drugs. However, Dr. Sabio said we need to be cautious since “a continuous inhibition of JNK can lead to undesirable side effects.”