Naga Munchetty mortified as she laughs at brain cancer joke

The beer belly turned out to be a sign of a rare cancer called liposarcinoma that affects fatty tissue in the body. It is a form of soft tissue cancer, a type of cancer that affects thousands of Brits each year. Soft tissue sarcinomas grow in the body’s soft tissue, including fat, muscles, deep skin, ligaments and tendons.

It was only by chance that the patient, whose rare case was shared by New York based medical professionals, was able to find out about his condition.

The 49-year-old patient had sought medical attention after being involved in an accident while riding a moped.

Doctors sent him for a scan to check for injuries. What they found was staggering: a 40cm by 40cm growth that stretched from his upper belly down to his pelvis.

It was so big that it was displacing some of the organs in his gut. But remarkably, he hadn’t been experiencing any symptoms. 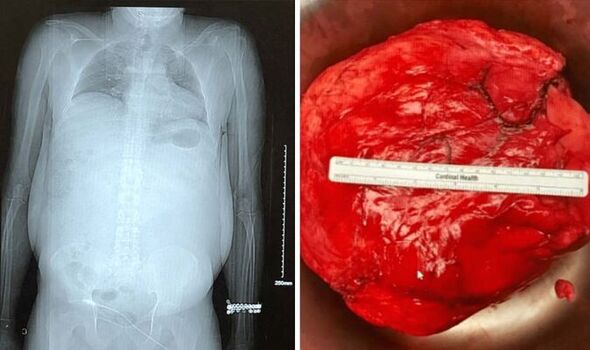 According to the case report published on Tuesday in the journal Cureus, after being confronted by the newly found cancer, the patient told the doctors that he had been experiencing “increased abdominal girth for over one and a half years that he attributed to ‘a beer belly’.”

He was reportedly a “social drinker” who drank “a few beers on the weekend” and said that he hadn’t experienced any symptoms like constipation or abdominal pain.

A liposarcoma tends to cause those kind of digestive issues.

The NHS explains that soft tissue sarcomas in the tummy may also cause a “persistent feeling of fullness”.

Liposarcomas can be removed using surgery or treated with radiotherapy and chemotherapy.

The American patient’s tumour was removed safely through surgery with no damage caused to the rest of his body.

Sarcoma UK explains that these type of cancers can be found anywhere in the body, although they are most common in the trunk, limbs and the abdomen.

However, other soft tissue sarcinomas may cause swelling near the lungs and cause a cough or breathlessness. 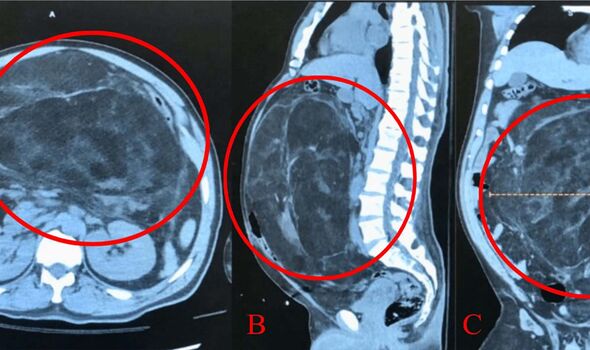 The types of treatment that people with a sarcoma may receive depend on how far the tumour has spread, and factors like your general health.

The patient’s tumour was localised in this instance, meaning it hadn’t spread.

The case-report, authored by Doctor Nicholas D Luke and colleagues offered its recommendations to doctors.

It said they should have “suspicion” of patients that come in “with a distended abdomen”.

Cancer at this point is well-researched, although there is much more to be explored. The American Cancer Society has spotted various risk factors that can lead to liposarcoma.

So, what are the risk factors? 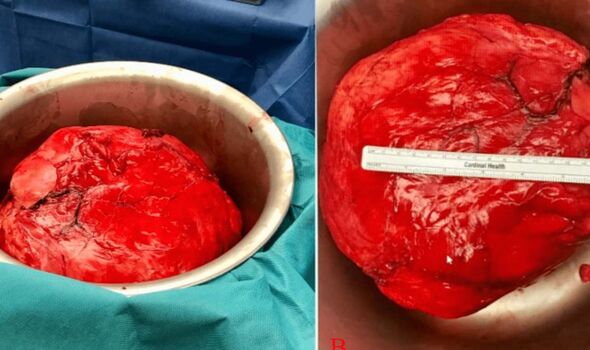 “I have a beer belly, should I visit my GP?”

According to the NHS, you should visit your GP if you’ve noticed several changes that have gone on for three weeks or longer.