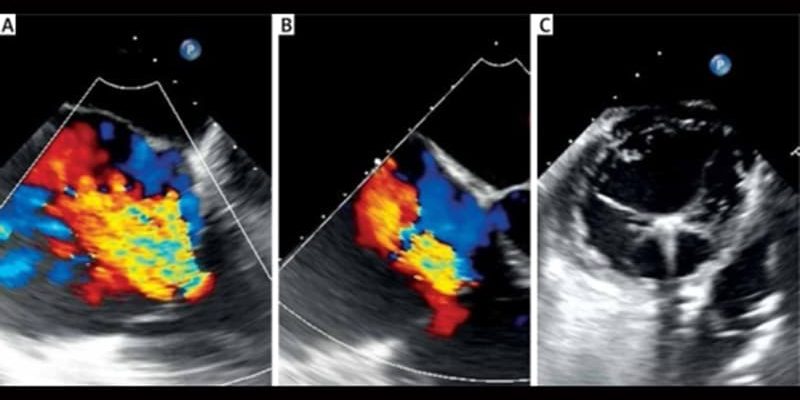 The Pascal device (Edwards Lifesciences) consists of a central spacer designed to bridge coaptation gaps, paddles for independent leaflet grasping, and a unique elongation implant that may improve safety, he explained.

The single-arm, feasibility CLASP-TR study included 65 patients (55% women; mean age, 77 years) at high surgical risk, of whom 97% had severe or greater TR, 70% had massive or torrential TR, 89% had atrial fibrillation/flutter, and 71% had New York Heart Association (NYHA) functional class III/IV symptoms. A preliminary report was published in 2021 with 34 patients enrolled.

Among all 65 patients, Greenbaum reported that 91% received the Pascal device, and implants were successfully retrieved in six patients whose leaflets were unable to be captured. The average implant time was 147 minutes and average length of stay 2.6 days.

The Pascal device also significantly improved functional and quality-of-life outcomes, including 92% of patients in NYHA class I or II, an 18-point increase from baseline in Kansas City Cardiomyopathy Questionnaire score, and a 94-meter improvement in 6-minute walk distance.

At the end of 1 year, major adverse events occurred in 17% of patients. Most of these were severe bleeding events, with five occurring by 30 days and 11 by 1 year. “This is certainly not a surprise given the high incidence of atrial fibrillation and high use of anticoagulation in this frail, elderly population,” Greenbaum said.

There were two cardiovascular deaths at 30 days and five such deaths by 1 year. None were deemed by an adjudication committee to be related to the device.

One stroke was reported by 30 days and three at 1 year. There were no myocardial infarctions. One patient required reintervention related to the device at 1 year.

In a paired analysis of echocardiographic data, there appeared to be evidence of favorable right ventricular (RV) remodeling from baseline to 1 year by numerous measurements, he said, including:

During a panel discussion of the results, Greenbaum said most of the patients had functional TR, so it was difficult to tease out whether there was any difference in efficacy between organic and functional TR. “But I will tell you that the size of the right ventricle and the function of the right ventricle seemed to be important…, which is why we need to get to these patients before there is RV damage.”

Reached for comment, Roxana Mehran, MD, Icahn School of Medicine at Mount Sinai, New York City, said, “because of the different etiologies, you’re going to have different outcomes and different Kaplan-Meier survivals, so to me it’s encouraging that they were able to get such good results.”

“TR is the next place to go; it’s prevalent, it’s complex, and these patients are sick,” she said. “This is just the beginning of the beginning. We’re going to see a lot more data in this space.”

The pivotal multicenter CLASP II TR is ongoing, comparing the Pascal device plus optimal medical therapy with OMT alone in an estimated 825 patients with symptomatic severe regurgitation at intermediate or high surgical risk. The study is estimated to be complete in March 2027.

Asked by Medscape and other media at a news briefing how the Pascal device may fit in with other potential future treatment options, like Abbott’s TriClip and Edwards Evoque tricuspid valve, Greenbaum said, “the extent of the reduction in TR is always going to be more with a replacement strategy, but what we don’t know, of course, is long term which is better for which subtype of patient.”

Joining in the discussion, fellow presenter Michael J. Reardon, MD, Houston Methodist DeBakey Heart and Vascular Center, said, “we know from decades of surgical work that replacing a surgical valve is never as good as repairing a surgical valve — ever, ever, ever — for the tricuspid or for the mitral.

“So, the question is, will clipping the mitral or clipping the tricuspid act more like a surgical repair or a valve replacement?” he said. “If it acts more like a repair and it works well enough, that’s clearly going to be the frontline.