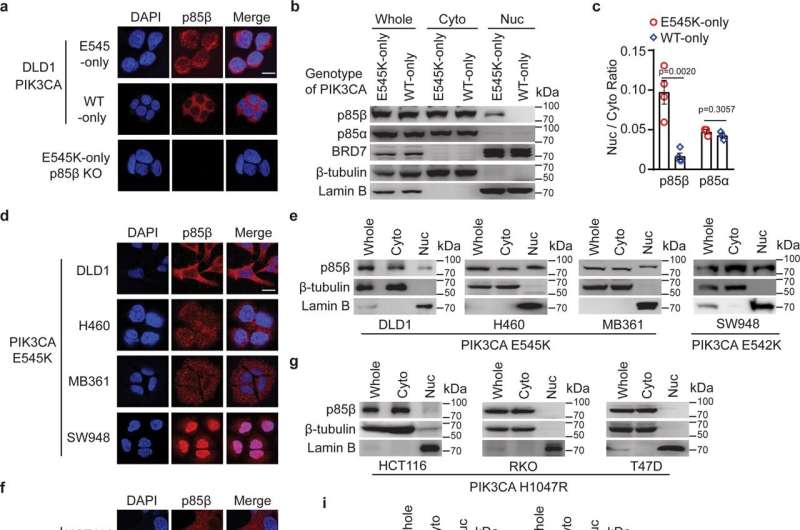 Researchers at the Case Western Reserve University School Medicine have found that combining two cancer drugs can be effective in treating a specific type of colorectal cancer, according to a new study published in Nature Communications.

Their study focuses on a colon cancer involving a mutation in a specific part of the PIK3CA gene, known to account for about 25,000 colorectal cancer patients—or about 15% of colorectal cancers—each year in the United States.

The Case Western Reserve-led team found evidence that combining the drugs Apelisib and Tazemostat to target the two signaling pathways involving these mutations was effective.

Based on their findings, clinical trials using the drug combination to treat this type of colorectal cancer are expected to begin on human patients later this year.

“Ultimately, the efficacy of the drug combination needs to be tested in cancer patients,” said Zhenghe Wang, the Dale H. Cowan M.D.—Ruth Goodman Blum Professor of Cancer Research at the School of Medicine. “We are actively pursuing phase 1 clinical trials in patients whose tumors have this genetic mutation and the clinical trials are led by Dr. David Bajor, an oncologist, at University Hospitals.”

Tazemostat is a clincal drug approved by the U.S. Food and Drug Administration (FDA) to treat a type of blood cancer. The drug Apelisib, meanwhile, is FDA-approved to treat some breast cancers.

Colorectal cancer is the second-leading cause of cancer-related deaths, and as many as 151,000 new cases of colorectal cancer will be diagnosed in 2022, according to the National Cancer Institute.

The development of cancer cells is driven by oncogenes, which, when mutated, act as a gas pedal to accelerate growth. Conversely, tumor suppresser genes act as a brake to slow down cancer cell growth.

Some types of hard-to-treat colorectal cancer tumors contain a mutation in the oncogene PIK3CA, which is an abbreviation for the scientific name for gene coding called “p110α of phosphatidylinositol 3-kinase” (PI3K). Researchers say that PIK3CA is mutated in about 30% of colorectal cancers and in 20% of all human cancers.

Wang, the principal investigator on this study, co-discovered the PIK3CA mutation in 2004.

“The PIK3CA mutation is found in up to 40 tumor types and affects an estimated 4 million patients each year worldwide,” Wang said. “There is no targeted treatment for PIK3CA mutant colorectal cancer, and our research may lead to new therapy options.”

“The PIK3CA cancer cell mutation has two different pathways, and both must be inhibited chemically, which is where the two-drug combination therapy comes into play,” Wang said.

By studying colorectal tumor cells in research models, the scientists were able to determine a two-pronged drug treatment option involving Tazemostat and Apelisib would be most effective.