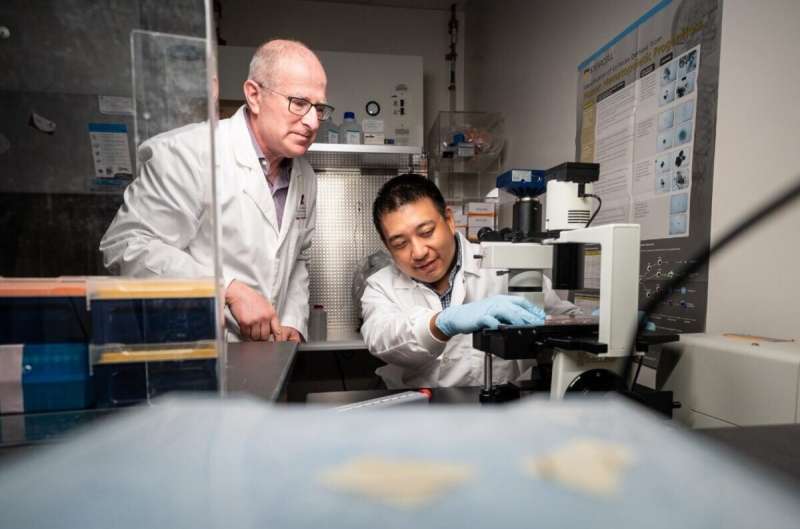 Hematologists at St. Jude Children’s Research Hospital have discovered key molecular details of how genetic variants in blood-forming machinery enable some people to retain the ability to generate red blood cells with a form of hemoglobin that is normally expressed only before birth. Persistence of fetal hemoglobin expression after birth can protect patients from the deleterious effects of mutations that cause beta thalassemia and sickle cell disease. The findings are already aiding development of gene therapies. The work was published online today in Nature Genetics.

Fetuses have a different form of hemoglobin that binds oxygen more strongly, enabling them to thrive in the low-oxygen environment of the womb. Researchers are developing a gene therapy whereby a patient’s own blood-forming cells, called hematopoietic stem cells, or HSCs, are genetically reprogrammed to favor production of protective fetal globin after birth, rather than transitioning to the aberrant adult form.

“More than 50 years ago, researchers had observed that people with beta thalassemia or sickle cell disease mutations who also inherited a genetic variant that gave them persistently high levels of fetal hemoglobin didn’t get as sick,” said corresponding author Mitchell Weiss, M.D., Ph.D., chair of the St. Jude Department of Hematology. “So, it has been a holy grail to figure out how to use drugs or genetic manipulation to enhance fetal hemoglobin therapeutically in these common, serious diseases.

“Our current study builds upon an extraordinary amount of prior research to offer important, therapeutically relevant insights into the mechanisms by which these variants repress the transition from fetal to adult hemoglobin,” Weiss added.

“Genes are controlled by a balance between activation and repression,” said first author Phillip Doerfler, Ph.D., of St. Jude Hematology. “Our work shows how the unique interplay between activators and repressors ultimately controls the expression of fetal hemoglobin.”

A gene therapy treatment to turn on fetal hemoglobin

The close proximity of activator and repressor sequences has important therapeutic implications for treating beta thalassemia and sickle cell disease. The researchers are already developing clinical trials of a gene-editing treatment that disrupts the repressor binding, yet still enables the fetal hemoglobin gene to be turned on. This genome editing approach must be precise, so as to not disrupt the adjacent activator sequence.

“Now we understand that because these activator and repressor sites are so close to each other, when we perform gene editing to manipulate them, we have to be careful that by trying to interfere with the repressor we don’t block the activator,” Weiss said.

The researchers’ objective is to take hematopoietic stem cells from sickle cell disease or beta thalassemia patients, edit the cells to disrupt the repressor binding site and return them to the patients. The red blood cells then made by those stem cells will be tipped toward expressing more fetal hemoglobin, which will alleviate the disease.