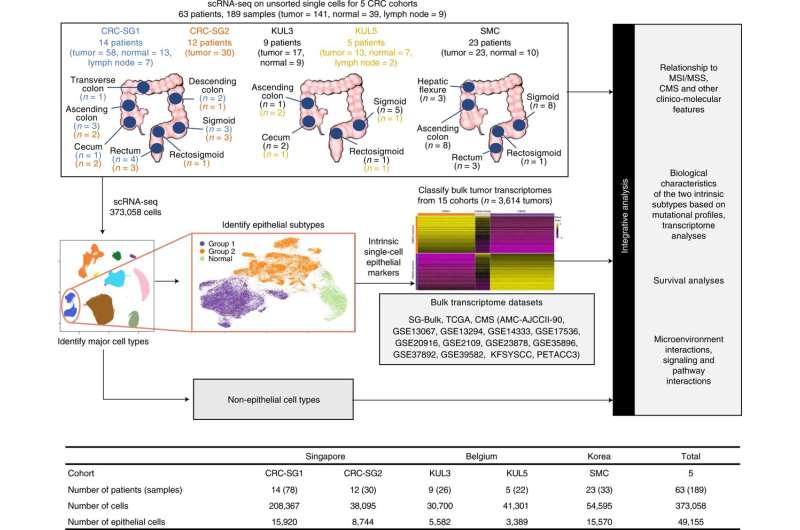 A team of clinician-scientists and scientists, led by the National Cancer Centre Singapore (NCCS) and A*STAR’s Genome Institute of Singapore (GIS) together with collaborators in Europe and South Korea, used single cell techniques to uncover a central dichotomy for colorectal cancer cells, leading to a proposed update of the classification system for the disease. These findings, published in Nature Genetics on 30 June 2022, have implications for drug development and treatment approaches in colorectal cancer.

In Singapore and worldwide, colorectal cancer is one of the most common cancers and the second-leading cause of cancer death. As it is a heterogeneous disease with substantial biological and clinical differences amongst patients, treating colorectal cancer and prescribing individualized treatment for patients directed by the biology of their disease is a challenge. In 2015, clinicians and scientists classified colorectal cancer based on genes expressed by the tumor (transcriptomics) leading to the 2015 international consensus molecular subtype (CMS1-4) classification, that is to date, the most robust and widely used transcriptomic system. However, the CMS classification relied on transcriptomic analysis of the entire tumor which meant that the individual differences from cancer cells and other stromal cells (e.g. immune, fibroblast & blood vessel cells) were obscured and could not be distinguished.

“The current classification systems for colorectal cancer do not adequately highlight the molecular underpinnings of the disease,” said co-senior author Professor Shyam Prabhakar, Associate Director of Spatial and Single Cell Systems at GIS. “Our team examined the malignant (epithelial) cell subtypes and defined their properties to understand their interactions with other cells using single cell profiling, so that we could accurately describe the heterogeneity of colorectal cancer.”

The NCCS and GIS-led research team analyzed 373,000 single cells from 141 tumor samples collected from 63 colorectal cancer patients in Singapore, Belgium and South Korea. Using single-cell and bulk transcriptomics, the team found that the malignant cells belong to two major epithelial subtypes, that they have termed intrinsic-consensus molecular subtypes (iCMS), consisting of iCMS2 and iCMS3, uncovering a central dichotomy that cut across previous classifications of colorectal cancer. Each subtype is characterized by distinct molecular signaling cascades and patterns of DNA duplications or deletions, mutations in key genes, RNA abundance patterns and gene regulatory networks.

The research team found that one-third of MSS tumors were iCMS3 subtype and had cancer cells much more similar to MSI cancers rather than other MSS cancers. Understanding the similarities between MSI-H cancers and iCMS3 MSS cancers could lead to an identification of components that can be exploited to adapt and modify immunotherapy regimens, that might work best in these patients with biology similar to MSI-H cancers. Conversely, understanding the distinct biology of iCMS2 MSS cancers could allow targeted drug development focused on this group of colorectal cancer. Furthermore, the CMS4 group of colorectal cancers, known to have the highest tendency to metastasize, was evenly divided into the iCMS2 and iCMS3 subtypes. Between these two groups, CMS4 cancers with iCMS3 epithelial cells were found to have the worst prognosis.

Based on their findings the research team proposed a refinement of the CMS classification known as “IMF”, which groups colorectal cancer into five groups based on their epithelial status, microsatellite status and the presence of fibrosis. The proposed IMF classification provides new insight into colorectal cancer and its origin, evolution and response to therapies. Further pre-clinical and clinical studies into the biology of the five groups could inform prevention, diagnosis and therapy.