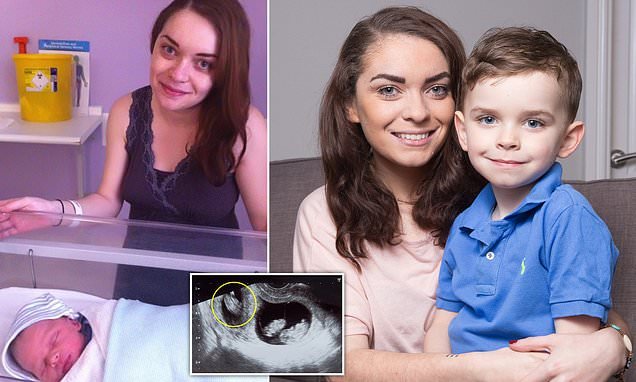 A mother of triplets had to carry two of her babies to full term – even though they died just 16 weeks into her pregnancy.

Bernadette Murphy, 29, could not have her two dead sons removed because the third one – James – was still growing healthily.

James’s brothers did not survive because of a rare condition called twin-twin transfusion syndrome (TTTS), which causes deadly problems with the placenta.

After the two boys had died, Ms Murphy had to take regular antibiotics to prevent an infection and was told her body could reject the entire pregnancy at any time.

Ms Murphy said ‘it never felt strange’ carrying all three of the boys – but she was hit by a wave of emotion when she gave birth in April 2014. 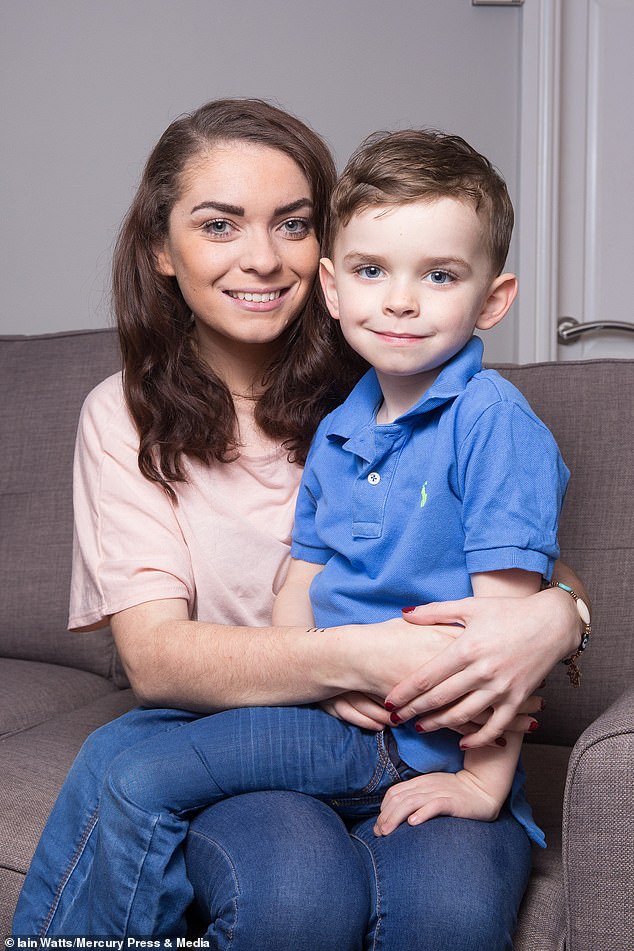 Bernadette Murphy, 29, carried two of her triplets to full term after they died to ensure the survival of her third son, James

TTTS happens when two or more identical babies share a placenta and there is an abnormal blood supply to the foetuses.

The effects of this can range from a minor difference in fluid in the amniotic sac to the death of one or both of the babies.

James was protected from the condition because he had his own placenta and therefore his own unaffected blood supply.

Ms Murphy said: ‘It never felt strange carrying all three of them – it was a comfort even though Joseph and Niall had passed – it was when I gave birth that I felt worse.

‘When they were born the realisation they were no longer with me really hit me.

‘When I was carrying them it felt like I was protecting them the whole time. I just wanted to have them at home with me.’

Ms Murphy, a teacher from Liverpool, was overjoyed when she and her ex-partner found out she was pregnant with not one but three boys in July 2013.

But devastation struck when she was told two of the boys, identical twins Joseph and Niall, who shared the same amniotic sac, passed away at 16 weeks.

James was still alive and would not be able to survive outside the womb until he was carried to full term.

So Ms Murphy continued with her pregnancy so James would be healthy enough to be brought into the world.

She said: ‘In my first scan the doctors thought I was having twins and later realised that it was triplets. 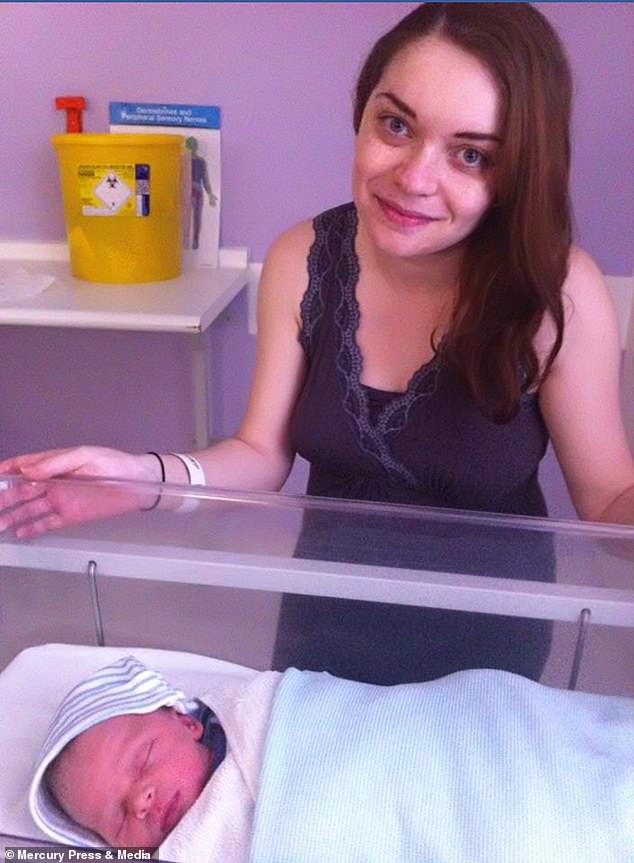 Ms Murphy was overjoyed when she and her ex-partner found out she was pregnant with not one but three boys in July 2013, but only one – James – would be born alive nine months later 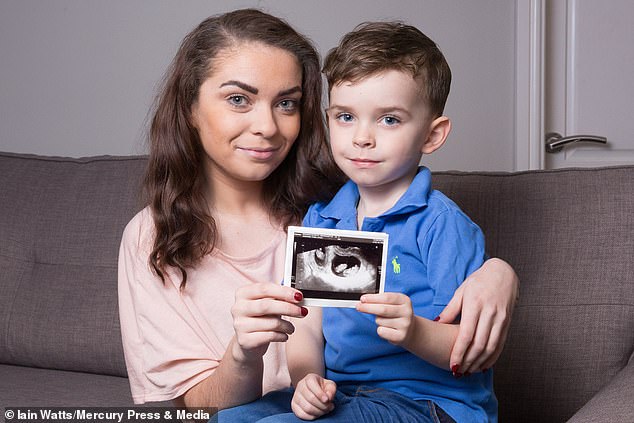 Ms Murphy said it ‘never felt strange’ to be carrying two dead babies alongside her living son, James (pictured), and that she felt like she was protecting them 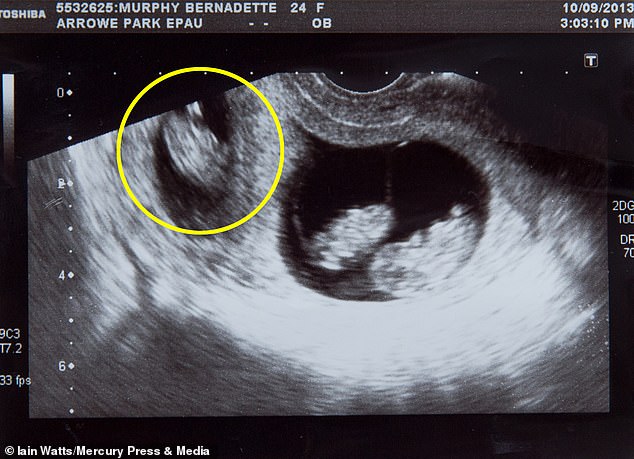 James (circled) was in a separate amniotic sac while the other two boys shared one (right). They were affected by twin-twin transfusion syndrome in which two babies sharing a sac have an abnormal blood supply – it can cause only minor effects or be fatal for both children

‘I was so happy and at first, everything seemed to be fine but my consultant warned me it could be a very complicated pregnancy.

‘Within the first three months I was in and out of hospital due to severe sickness and excessive bleeding, carrying three babies.

‘I attended my 12 week scan where there was a concern with the growth of Niall compared to his identical twin Joseph.

‘I went for weekly scans in order for my consultant to monitor the twins.’

After 15 weeks Ms Murphy was told doctors suspected she had TTTS, so she was referred for emergency tests.

Around 300 children in the UK die from the condition each year, and it affects around 6,000 in the US.

‘When I went for my 16 week scan I explained I had experienced cramps down my left side and some kicking motions since my previous scan,’ she said.

‘I knew something was not right, I remember the consultant grabbing my hand and I was told the twins had passed away.

‘I was by myself and I remember just wanting my family to be with me.

‘I immediately asked if James was okay and was told that he was developing well but there could be potential complications down the line.’

Ms Murphy was told the entire pregnancy could fail at any time, meaning James would die, too, but she carried him to 37 weeks.

She gave birth on April 2, 2014, at Whiston Hospital in Merseyside to a healthy 6.5lbs James, as well as having stillborn boys Joseph and Niall.

‘Joseph was fully formed but Niall had been partially absorbed into the placenta but I was just so happy that I got a chance to see them,’ Ms Murphy said.

She was able to keep the boys ashes after allowing doctors to conduct research and, as James grew, she could explain how he had two very special siblings. 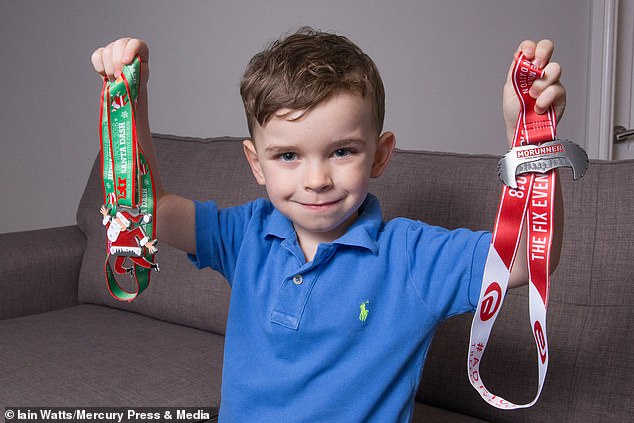 James, now four, is ‘full of energy’ and did two 1km runs this year for charity in memory of his brothers (James is pictured holding the medals from the runs)

The mother and son remember Joseph and Niall every year by lighting a candle on their anniversary and also mark Twin To Twin Transfusion Day every December.

And this year James, now four, completed two 1K runs for charity as a tribute to his brothers.

Ms Murphy said: ‘I wanted him to know that he had two brothers but it was a tricky to explain at first and extremely sensitive as I needed to ensure I was strong enough emotionally.

‘I didn’t want him to think it was his fault. I explained that they were sick and they were now up in the sky.

‘I remind him how special and unique he is and that their blood flows through him always. They are always with him.

‘He loved doing the runs as he is so full of energy and he will always know he had two special brothers.’

WHAT IS TWIN-TWIN TRANSFUSION SYNDROME?

Twin-twin transfusion syndrome is a rare but serious condition that can occur in identical pregnancies when twins share a placenta.

Abnormal blood vessel connections form in the placenta and prevent blood from flowing evenly between the babies.

One twin then becomes dehydrated, which affects its growth.

The other develops high blood pressure and produces too much urine.

This leads to an enlarged bladder and excessive amounts of amniotic fluid, which can put a strain on the twin’s heart, leading to heart failure.

Without treatment, TTTS can be fatal for both twins.

The condition occurs in about around 15 per cent of identical twins who share a placenta, according to the charity Tamba.

Around 300 twins die from the condition every year in the UK, while 6,000 babies are affected annually in the US.

If this is not enough, laser surgery is used to seal shut abnormal blood vessels and permanently disconnect them.

The surgeon then drains excess fluid.

Even when treated successfully, most TTTS babies are born premature.

However, the majority go on to have long, healthy lives.