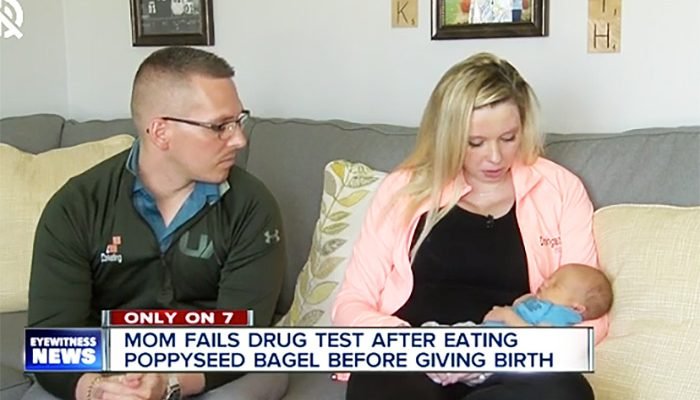 A mom missed out on the first day of her newborn son’s life after she failed a drug test due to the poppy seed bagel she ate for breakfast.

Elizabeth Dominguez was stunned to hear that she had tested positive for opiates the day she went into labor with her son Carter.

“I did a urine test and it came back that I tested positive for opiates,” Dominguez, 29, told WKBW. “I called my husband freaking out saying ‘how is this possible?’ I don’t do drugs.”

The mom from Tonawanda, NY, asked for a new drug test, but the hospital had to call Child Protective Services as part of their protocol.

“I told the lab, I told the hospital, I told everyone, ‘Retest me. Take my blood. Do whatever you have to do, because this isn’t right,’ ” she said.

Unfortunately, “there’s no way to tell if a positive test result stems from poppy seed consumption or opiate ingestion,” says Dr. Travis Stork, an ER physician, host of The Doctors and a member of PEOPLE’s Health Squad previously told PEOPLE. But not all poppy seeds will lead to a positive drug test — it depends on whether the seeds are washed beforehand or not, which removes the outer residue.

Dominguez delivered Carter later that day and she, along with her newborn son, were tested for opiates. Both came up negative, but CPS kept her from taking him home.

“CPS shows up in my room, asking me all sorts of questions like, ‘if we are to take your kids and your baby away from you, where would you like them to go?’ ” she said.

She was discharged from the hospital but Carter had to stay, forcing them apart in his first 24 hours of life.

“I felt absolutely horrible,” she said. “I felt like a terrible mother leaving him.”

And Dominguez is warning all mothers-to-be to stay away from poppy seeds.

“I just want everyone to know that this could happen,” she said. “It’s such a terrible thing and I don’t want it to happen to anyone.”