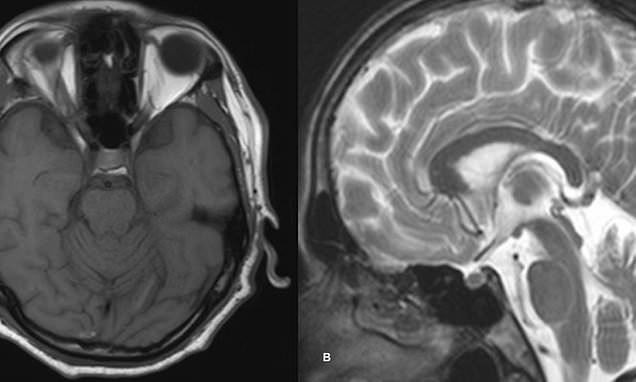 Man, 50, is diagnosed with a syphilis infection in his BRAIN after going to hospital unable to walk or talk properly

A 50-year-old man was diagnosed with a syphilis infection in his brain after going to hospital unable to walk or talk properly.

The life-threatening condition, known as neurosyphilis, can occur when the sexually-transmitted illness syphilis is left untreated for a long time.

It can take anywhere between three weeks to 50 years for the infection to reach the brain and central nervous system.

The unnamed man denied having unprotected sex or ever being diagnosed with syphilis when he spoke with doctors in India.

In the three months before going to hospital he had slowly lost his coordination and developed tremors and uncontrolled eye movements.

A scan revealed his brain was disintegrating and the only test that came back positive was one for the extremely rare neurosyphilis.

The man was given antibiotics for two weeks and physiotherapy, and three months later he had recovered.

A 50-year-old man with difficulty walking and talking had a brain scan which revealed neurons in the cerebellum – the area of the brain that controls muscle coordination and balance – were dying (see bottom right), due to life-threatening condition neurosyphilis

Doctors, led by Dr Deepti Vibha at the Department of Neurology, Delhi, wrote the case study in the British Medical Journal Case Reports.

Although neurosyphilis can be debilitating, it’s actually an ‘easily diagnosed and treatable condition’, the doctors said.

About 15 to 30 per cent of people infected with syphilis who don’t get treatment will develop complications known as tertiary (late) syphilis, according to the Mayo Clinic.

Neurosyphilis is a disease of the brain and spinal cord and it has different symptoms to syphilis, the sexually transmitted illness.

It can occur in people with syphilis, especially if they are left untreated.

Neurosyphilis is different from syphilis because it affects the nervous system, while syphilis is a sexually transmitted disease with different signs and symptoms.

There are five types of neurosyphilis:

People with HIV/AIDS are at higher risk of having neurosyphilis.

Source: The National Institute of Neurological Disorders and Stroke

In the late stages, the disease may damage your brain, nerves, eyes, heart, blood vessels, liver, bones and joints.

Neurosyphilis tends to develop about 10 to 20 years after the initial syphilis infection with the bacterium Treponema pallidum.

There are five different forms of neurosyphilis, but the doctors said the unidentified man did not fit into any of the categories.

He had very few of the classic signs – such as nausea, vomiting, a stiff neck, a headache, strokes, psychosis or mood swings.

Upon examination, it was clear he had ataxia, which is a condition whereby a disease affects the brain and nervous system, causing uncoordinated movements.

He had limited ability to use his limbs as well as suffering with dysarthria – difficulty with speaking caused by brain damage.

He was still able to form words but physically struggled to speak. Patients with dysarthria may mumble, slur or be unable to control the volume of their voice.

The doctors wrote: ‘The patient denied high-risk sexual exposure or any previous history of genital infections or ulcers.

‘He was a well-controlled hypertensive [high blood pressure patient]. He was a social drinker.’

When all the usual tests showed the man was in a relatively healthy condition, he was sent for a brain MRI.

This revealed nerves in the cerebellum – the area of the brain that controls muscle coordination and balance – were dying. 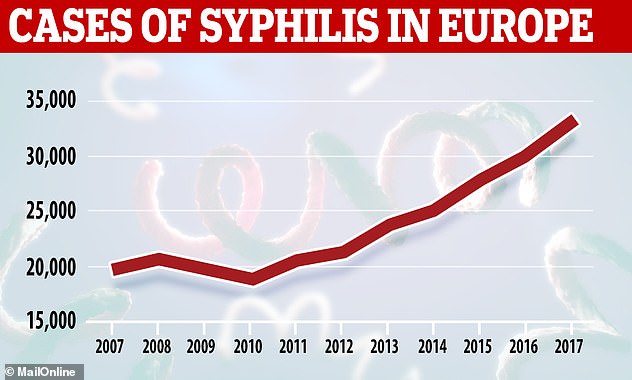 The doctors were left with no doubt that this was related to positive test results for Treponema pallidum, the bacteria that cause syphilis.

The patient was given antibiotics for two weeks which significantly improved his condition while also undergoing physiotherapy.

He gradually showed improvement over the course of his follow-up and after three months he was walking again.

The patient was one-of-a-kind, according to the doctors, in the sense that the brain deterioration was his only symptom.

Syphilis is often considered a ‘Victorian disease’, but it still remains prevalent today.

In fact, STIs are said to be a ‘persistent and endemic health threat worldwide’, according to the World Health Organization.

Cases of syphilis have soared by 70 per cent in Europe since 2010, the European Centre for Disease Prevention and Control (ECDC) in Stockholm revealed in July.

They are also concerned there is a reduced fear of HIV, and when a person has HIV,  syphilis can progress more quickly and severely.

Experts have in the past blamed dating apps for leading to more people having casual sex.

Left untreated, STIs can lead to serious and chronic health effects that include neurological and cardiovascular disease, infertility, ectopic pregnancy, stillbirths and an increased risk of HIV.

Syphilis alone caused an estimated 200,000 stillbirths and newborn deaths in 2016, making it one of the leading causes of baby loss globally, research from the WHO found in June this year.

Syphilis is a chronic bacterial disease that can be contracted by other means but is typically a sexually-transmitted disease.

It comes from the bacteria Treponema pallidum.

Sufferers develop sores, though these can often go ignored.

The infection develops in stages.

In the early stages, patients can receive an injection of Benzathine penicillin G. This will not undo the internal damage but will eliminate the infection.