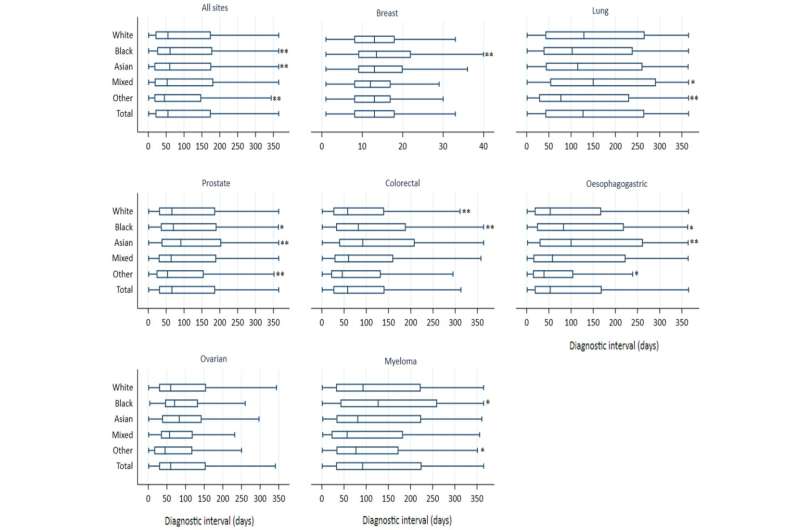 Black and Asian patients are waiting up to a month longer than White patients for some forms of cancer diagnosis from the point at which they first seek medical help, new research has found.

An analysis of data from 126,000 patients found that Black and Asian patients were waiting several days longer than White patients, in five of seven cancers studied. Led by the University of Exeter, the research found that for some esophagogastric and colorectal cancers, this wait was up to eight weeks longer for some ethnic minority patients.

Published in the journal Cancer, the study found that in breast cancer, the difference between Black and White women became even larger with longer delays. In particular, the 10% of Black women who waited longest for a diagnosis actually faced a delay of 30 days, compared to White women.

However, the team concluded that these delays to diagnosis would have a real but relatively small effect on cancer survival rates.

Lead author Tanimola Martins, from the University of Exeter, said, “This study adds some evidence to help explain why U.K. ethnic minorities have poorer outcomes for some cancers, and report worse experiences of healthcare. We urgently need to understand why this is the case for Black and Asian groups, however. Our next study will examine whether the reported symptoms of cancer are the same or different across the ethnic groups. The delays to diagnosis in some cancers that our present research has highlighted are just part of that picture.”

Previous research has revealed poorer outcomes and satisfaction with health services in Black and Asian groups, for both breast cancer and prostate cancer. So far, no U.K. research has been conducted on such ethnic disparities in outcomes on esophagogastric cancer, and there is no evidence of worse outcomes for colorectal cancers.

Other factors that may contribute to poorer outcomes among ethnic groups include low uptake of screening for breast cancer among Black women. Differences in the offer or acceptance of investigation for prostate cancer may also play a role among Black men.

In the latest study, researchers analyzed data from 126,627 patients, of whom 92.1% were White, 1.99% Black, 1.71% Asian, 1.83% Mixed, and 2.36% were of Other ethnic background. The team analyzed primary care-linked data of patients who reported features of seven cancers (breast, lung, prostate, colorectal, esophagogastric, myeloma, and ovarian), one year before diagnosis.

Michelle Mitchell, Cancer Research U.K.’s chief executive, said, “This study suggests that Black and Asian groups are waiting longer on average for a cancer diagnosis compared to White patients. Although the differences were small and unlikely to be the sole explanation for the inequalities in cancer survival, these extended wait times may cause additional stress and anxiety for ethnic minority patients.

“More needs to be done now to understand and tackle drivers of inequality across the U.K.

“For this to happen, our next Prime Minister needs to make cancer a priority. Crucially, they must take targeted action to address inequalities and ensure that all important timely diagnosis for everyone.”

The latest finding is part of a major body of work led by Exeter, which seeks to understand and ultimately improve cancer diagnosis in ethnic groups. A recent paper identified that Asian and Black patients were less likely to be diagnosed via emergency routes.