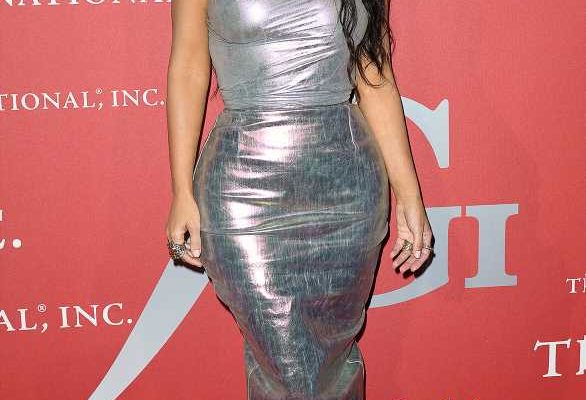 Kim Kardashian West has some new fitness goals in mind.

The KKW Beauty mogul and reality star, 39, hit the gym with her personal trainer, Melissa Alcantara, on Saturday evening, and revealed to fans that she is trying to lose some weight that she’s gained over the course of the last year.

“So we’re doing a night workout before my dinner, which I never do — with this one — but I figured we have to get into it at some point,” Kim said in a video posted on her Instagram Story on Saturday, referring to Alcantara, who was seen squatting. “And yeah, I mean, sometimes we fall off and sometimes you really gotta get it together, and this is one of my fallen-off times where I am, I think, 18 lbs. up from what I was about a year ago, a year and a half ago.”

She then told followers that she hopes to lose weight with the help of her trainer, and hinted that they have a major goal to reach before her next birthday.

“To feel good, I just want to get it like, a really good goal weight, and so that means working out at all costs,” she said. “It’s my eating. I work out but it’s like my eating. But Melissa and I have a major goal for by the time I’m 40.”

The next day, the mother of four was back in the gym for a Sunday morning workout as well. While hitting a StairMaster machine, she captioned a video on her Instagram Story,  “A morning workout after a night workout is the best!!!”

In August 2018, Kardashian West revealed in an interview with E! News that she had recently lost 20 lbs., and shared the ways that she achieved her fit physique.

“I work out about an hour-and-a-half every single day, heavy weights. I don’t do a lot of cardio,” she told the outlet at the time. “But honestly, like even my mom pulled me aside maybe a week ago and pulls me in a closet and is like, ‘What are you doing?’ She says, ‘I don’t care what, I just need to know.’”

“I’ve lost 20 pounds and I’m really proud of that. I was almost 140 forever and now I’m like 116 and it just feels good,” she continued. “I didn’t see results right away, but when you stick with something and you’re consistent, you will. So, I love it.”

Kardashian West also said she also changed up her diet, cutting back on the amount of sugar she consumed. “I don’t really eat sugar the way that I used to. It doesn’t really do it for me,” she explained.

“I’ve kind of been trained to just eat a lot healthier than I used to. I used to just eat anything and everything and I loved it,” the reality star added. “And so I really do control that now. … I don’t want to ruin it by just stuffing my face.”