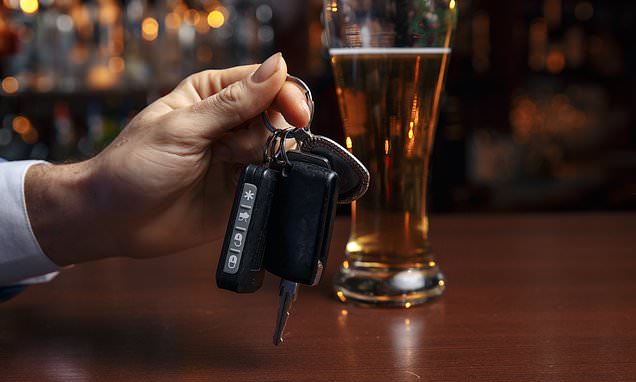 Just ONE pint of beer or glass of wine could make it unsafe to drive: Scientists question drink-drive limit after finding people are ‘significantly compromised’ by low levels of alcohol

One alcoholic drink could be enough to make it unsafe for someone to drive, scientists have warned.

Although there is no standard amount of alcohol someone can drink to stay within the legal limit, some may think they can get away with one glass of wine or a pint.

But a study suggests just one tipple is enough to ‘significantly compromise’ a person’s feeling of control by altering their brain function.

Scientists said even one is too many and the law should be reformed to mean people driving with any alcohol in their blood should be punished. 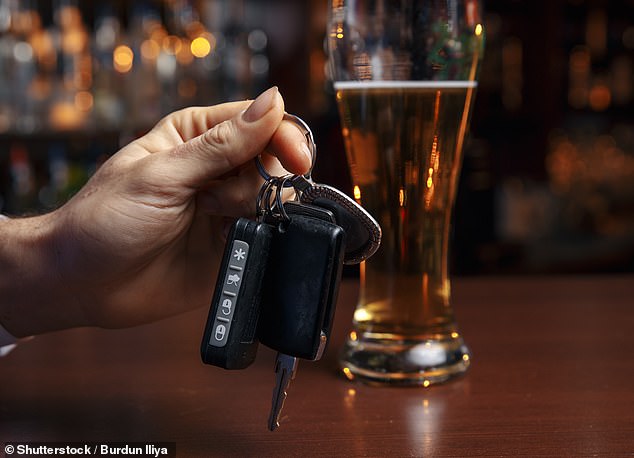 One alcoholic drink could be enough to cause unsafe driving, scientists at the University of Sussex have warned (stock image)

Researchers at the University of Sussex did their study by comparing a person’s sense of agency before and after they’d had a drink.

The sense of agency is the feeling of being in control of our actions and understanding what the consequences are and when they will happen.

For example, when a person is driving a car, they are aware they are the agent producing a consequence, such as when they turn the wheel, the car will turn.

Measuring sense of agency is difficult, said the lead author Dr Silvana De Pirro, because it’s not possible to rely on self-reporting of how in control they feel because they might be bias.

Researchers relied on another measure called ‘intentional binding’, which refers to a person’s judgement of time and actions.

WHAT IS THE UK’S DRINK-DRIVING LAW?

England and Wales has among the most lenient drink driving laws in Europe.

This does not translate into a fixed number of drinks as people of different ages, weights and alcohol tolerance process drink at different rates.

However, as a rule of thumb most drivers drinking would limit themselves to around one pint or one glass of wine.

But ministers have faced calls to change the law so that drivers are not allowed to consume any alcohol before they get behind the wheel – or at least far less.

In most other European countries, the limit is less, usually 50 milligrammes per 100 millilitres of blood3.

The alcohol limit for drivers in Scotland is lower than in the rest of the UK after they lowered it to 50 milligrammes of alcohol in every 100 millilitres of blood in December 2014.

It is believed to be produced by the same mechanisms in the brain as their sense of agency.

Researchers found that when people had a small drink their perception of the time between an action and its consequence got shorter.

They did not say whether people were likely to make decisions too soon or too late, or to make the wrong ones, but that the rising sense of agency could make them overconfident when driving and more likely to make dangerous decisions.

Dr Pirro said: ‘Our study presents a compelling case that even one pint of beer is enough to significantly compromise a person’s sense of agency.

‘This has important implications for legal and social responsibility of drivers, and begs the question: are current alcohol limits for driving truly safe?’

Professor Aldo Badiani, Director of the Sussex Addiction Research and Intervention Centre (SARIC), said: ‘It’s important to note that in our experiments, all the participants stayed within the legal alcohol limit for driving in England, Wales, the US and Canada.

‘And yet we still saw an impairment in their feeling of being in control.

‘In England, Wales and North America, the argument to lower the limit has much momentum. The results of our study support the implementation of such a change in the law.’

The study included a total of 59 participants who drank a cocktail that had doses of alcohol adapted to their body weight to make sure they were within the legal driving limits in England and Wales.

They were asked to look at a blank clock face which had a red dot going round every two seconds.

The researchers told them to press a key, and then asked them, ‘Where was the red dot when you pressed the key?’.

After a drink, they judged actions as occurring later than they had, and the sound occurring earlier than it had, ‘binding’ the two together – referring to an increase in the phenomenon ‘intentional binding’.

‘In the case of someone who is drunk, the binding is further increased. So this might indicate that your sense of agency is increased which means you think you are controlling the external environment.’

Until now, research has mostly focused on the loss of control produced by obvious drunkenness, characterised by slow reactions, aggression or risky behaviour.

The legal limit for driving in England and Wales is currently 80mg/100ml of blood, and 50mg/100ml in Scotland and most European countries.

There is no fool-proof way of drinking and staying under the drink drive limit, and guidelines do not state how many drinks are within the limit.

This is because it varies dramatically from person to person, depending on age, weight and what they have eaten that day, for example.

Since 1982, death from drink driving has decreased by 48 per cent in the UK.

The research was published in the journal Addiction Biology.