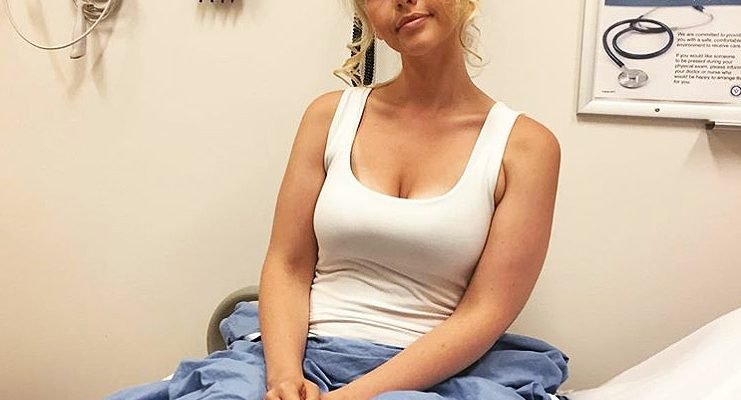 Elly Mayday’s thousands of fans mourned this week after learning that the 30-year-old model had died of ovarian cancer on March 1.

The body positivity activist had battled the aggressive cancer since 2013, though it took several tries to get her doctors to believe that something was severely wrong and formally diagnose her.

With chemotherapy, a hysterectomy and multiple surgeries to remove the cancer, Mayday went into remission in 2015. But ovarian cancer is persistent — 40 to 50 percent of patients who undergo chemotherapy and enter remission will have a recurrence within three years, according to the University of New Mexico Cancer Center — and her cancer returned in 2017.

Mayday did her best to maintain her health, switching to a plant-based diet and keeping up her workouts, but in June 2018 her body started failing. She was hospitalized on June 12 for what doctors believed was a partial bowel blockage and released two days later. Throughout the process, she kept her fans updated on Instagram.

On June 29, she announced she was back in the hospital because her cancer had grown. Mayday spoke candidly about her mindset.

“I’ll be honest. Finding out just how much this cancer has grown this week has hit me so hard,” she said. “I’m feeling hopeful with all of your encouragement and positivity. I knew she would come back to me but for a few days. I just floated. You walk around empty. I hated every interaction that felt mediocre. Every conversation I couldn’t give two s—- about. (If you listen, you’ve probably had a few today) when you’re in the dark, light feels impossible to find. I guess that’s what depression feels like.”

In July, Mayday started another round of chemotherapy, but admitted that she’s “not super strong going into this.”

“The past 2 weeks of NG tubes, hospital stays, vomiting and not having food for 10 days now really has me run down,” she said on Instagram. “I’m pretty miserable and when I’m like this I don’t like being too public. I’m cold in all this heat and about as tired as a mule.”

As Mayday continued with chemotherapy, she said that her Instagram followers were helping her stay positive.

“I really love seeing the comments and contributions to my posts,” she said. “I want more people to know me, feel connected and help push my story out there so I keep being open when I know more people are watching. It’s helped me by being public, feels like I’m doing it for all of you.”

At the end of July, Mayday announced that her body wasn’t responding well to treatments, and instead of going in and out of the hospital for her chemotherapy, she was going to be there long-term.

“Today has been the toughest day of my life,” she wrote on July 21. “I will be staying in hospital for the next 4 weeks/possible months to receive IV feedings and chemo until my body starts working again. My body needs to be fed due to the amount of tumors and the constant fear of having a complete blockage of my bowels. I’ll do my best to keep my spirits high, as I know you will too. It’s just been non-stop for the past 3 weeks and it’s not over yet. So this is the plan. Keep living. Keep going. Find the light.”

In August, Mayday decided to shave her head because her hair would not stop falling out.

“It was annoying, I was tying it up and it would come out with the tie. So I just got rid of it,” she said. “I’m not upset. I am excited to see how it comes back. I’m also happy to have this second opportunity to show women they can beautiful without hair.”

On August 22, Mayday learned that she developed a blood clot in her left lung. But she came up with a fun idea for her treatment.

“So now I’m on a long term dose of blood thinners (needle everyday) I’m a bit bummed about that but I figure if all you girls send me the name of your ex boyfriends, who were pricks, I’ll dedicate my needle to them,” she said.

She shared a photo of her injection sites a few days later, but that lost her some followers. Mayday said that she’s doing her best “to not freak you guys out while at the same time giving you a real look at my situation.”

“I don’t think my page is typical of the cancer story,” she said. “I’m not the ‘thumbs up’ cancer girl that’s going to always post positively. I’m not throwing shade on those who are, it’s just not me. I’m not a happy person every day. I’m not a warrior, I don’t label myself with this ‘fight’ vocabulary associated with cancer. I’m just a girl who’s working towards getting better.”

In September, she got some promising news on her treatment — she would undergo surgery to hopefully unblock her bowel and remove a tumor. The procedure went well, and Mayday was able to leave behind the three feeding tubes the doctors had put in because she couldn’t keep any food down. She developed an infection a few days later, but doctors were able to correct it and Mayday got to escape the hospital — for the first time in three months — on Oct. 12. Four days later, after 89 straight days in the hospital, she was discharged, which she celebrated with bright red lipstick and a skip as she went out the door.

For two months, Mayday was able to get lots of time outside with her family in Canada. But unfortunately, three days before Christmas, she was back in the hospital for what would be her final stay.

“I’m already so relieved to be here. I’ve missed all my wonderful nurses and even though it’s not the greatest of situations, it’s so nice having familiar faces taking care,” she wrote on Jan. 7. “Sorting out the pain is top priority. How can anyone think straight when in pain? They can’t.”

In her last written post before her death, Mayday said that she’s proud of how she spent her 30 years of life.

“I’ve always been looking for that opportunity to help people,” she said on Jan. 15. “My choice to be public and try and share my strength was imminent. Helping is how I justify my time here is well spent. I’m lucky I have been able to combine it with the fun career of modeling, cause that’s also very me (hah no surprise).”

“I appreciate everyone who lets me know I’ve made a difference, with my advice, my sharing, my photos and just my general approach to a real tough situation.”