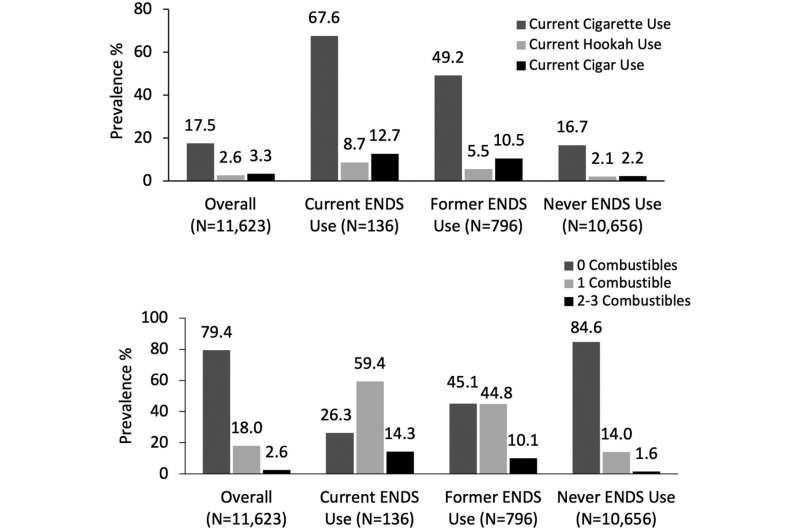 Hispanic and Latinx young men with higher levels of education who were born in the United States and speak mostly English at home are more likely to use e-cigarettes, according to a Rutgers researcher.

In a study, published in American Journal of Medicine Open, researchers examined current and former use of e-cigarettes among individuals from six distinct Hispanic and Latinx backgrounds.

Electronic cigarettes—also called e-cigarettes or electronic nicotine delivery systems (ENDS)—rose in popularity in 2014 when conventional cigarette use decreased among adults in U.S. However, little is known about e-cigarette use in ethnic minorities who have historically been disproportionately targeted by tobacco marketing and experienced significant tobacco-related health disparities.

While previous research has shown that tobacco use among Hispanic and Latinx adults is lower than in non-Hispanic whites, conventional cigarette use is more common among individuals of Puerto Rican and Cuban backgrounds compared with those of Mexican and Central or South American backgrounds. Hispanic and Latinx individuals with higher levels of acculturation—being U.S.-born and preferring English—were more likely to use tobacco products.

“ENDS products represent a potential disruptive innovation to traditional tobacco use, with adolescents and young adults experimenting with e-cigarettes,” said Ayana April-Sanders, an instructor at the Rutgers School of Public Health and lead author of the study.

“This experimentation is a risk factor for progression to combustible cigarette smoking and nicotine-dependence, which could lead to a ‘tipping point’ phenomenon, where future generations experience a higher prevalence of nicotine dependence and tobacco-related disease compared with previous generations.”

The study, which is among the first to characterize e-cigarette use among people of Hispanic and Latinx backgrounds, analyzed data from 11,275 adult participants of the Hispanic Community Health Study/Study of Latinxs for current, former and ever use of ENDS products.

The researchers found 2 percent of adults surveyed were current ENDS users, while about 10 percent were former ENDS users. They also found that individuals of Puerto Rican and Mexican backgrounds were more likely to try ENDS than those of Dominican, South American, Cuban or Central American backgrounds.

Among Hispanic and Latinx adults, researchers found a high use of ENDS among those under 45 years of age. Additionally, they found that young adults who had never smoked conventional cigarettes were using e-cigarettes, suggesting that ENDS may promote cigarette smoking and increase health risks from chronic exposure to toxic substances in ENDS products.