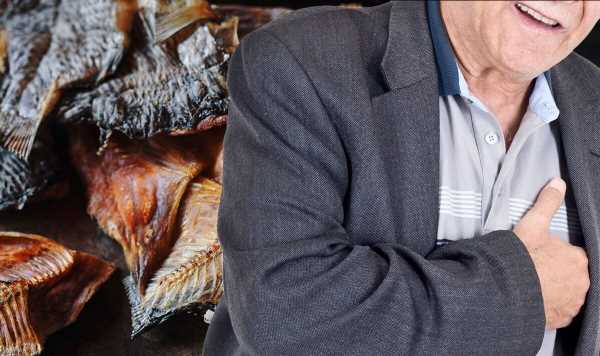 Heart disease: Doctor explains how to reduce risk in 2021

Heart disease is an umbrella term for a range of conditions that narrow or block blood vessels. It is the leading cause of death globally, with almost 18 lives being lost to cardiovascular complications each year, according to figures released by the World Health Organization.

Eating fish is one of the best ways to reduce your risk of developing heart disease.

That’s because fish contains omega-3 fatty acids – a type of unsaturated fatty acid that may reduce inflammation throughout the body.

The Mayo Clinic explains: “Inflammation in the body can damage the blood vessels and lead to heart disease and strokes.”

The heart-healthy benefits are clear, but it matters how you prepare your fish, research suggests.

If you eat fish to gain the heart-health benefits of its omega-3 fatty acids, baked or boiled fish is better than fried, salted or dried, according to research presented at the American Heart Association’s Scientific Sessions 2009.

And, researchers said, adding low-sodium soy sauce or tofu will enhance the benefits.

“It appears that boiling or baking fish with low-sodium soy sauce (shoyu) and tofu is beneficial, while eating fried, salted or dried fish is not,” said Lixin Meng, M.S., lead researcher of the study and Ph.D. candidate at the University of Hawaii at Manoa.

The findings also suggest that the cardioprotective benefits vary by gender and ethnicity – perhaps because of the preparation methods, genetic susceptibility or hormonal factors.

Many studies have suggested that eating omega-3 fatty acids reduces the risk of heart disease; however, little is known about which source is most beneficial.

In this study, researchers examined the source, type, amount and frequency of dietary omega-3 ingestion among gender and ethnic groups.

Participants were part of the Multiethnic Cohort living in Hawaii and Los Angeles County when they were recruited between 1993 and 1996.

The group consisted of 82,243 men and 103,884 women of African-American, Caucasian, Japanese, Native Hawaiian and Latino descent ages 45 to 75 years old with no history of heart disease.

Omega-3 intake was inversely associated with overall risk of death due to heart disease in men – a trend mainly observed in Caucasians, Japanese Americans and Latinos.

However, there weren’t many blacks or Hawaiians in the study, so the results should be interpreted cautiously, Ms Meng said.

Overall, men who ate about 3.3 grams per day of omega-3 fatty acids had a 23 percent lower risk of cardiac death compared to those who ate 0.8 grams daily.

“Clearly, we are seeing that the higher the dietary omega-3 intake, the lower the risk of dying from heart disease among men,” Ms Meng said.

For women, the omega-3 effect was cardioprotective at each level of consumption but not consistently significant.

Salted and dried fish was a risk factor in women.

In contrast, adding less than 1.1 gram/day shoyu and teriyaki sauce at the dinner table was protective for men but not for greater than 1.1 gram/day. For women, shoyu use showed a clear inverse relationship to death from heart disease.

Ms Meng noted that shoyu that is high in sodium can raise blood pressure, so she stressed low-sodium products. Eating tofu also had a cardioprotective effect in all ethnic groups.

According to the NHS, the most common symptoms of coronary heart disease (CHD) are chest pain (angina) and breathlessness.

“But some people may not have any symptoms before they’re diagnosed.”