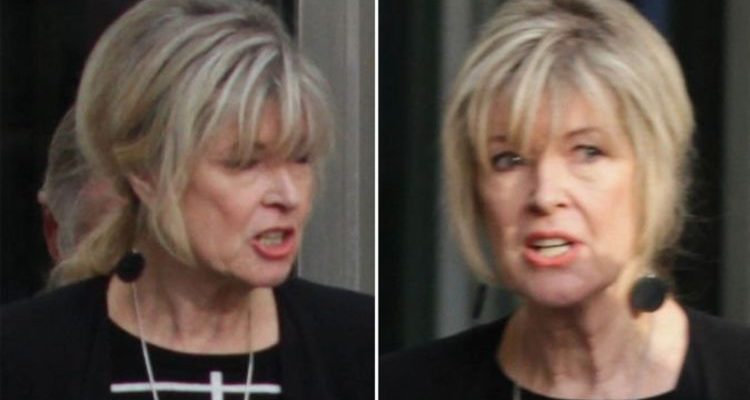 The live version of the telly show Rip Off Britain is shown for a whole week twice a year and has been shown on the BBC since 2009. Alongside Somerville, other presenters include TV royalty Angela Rippon and Gloria Hunniford. Beginning her career at the BBC in 1972, Somerville went on to present the Nine O’Clock News before moving to ITN in 1987. There she presented both the Lunchtime News and News at Ten, until she was diagnosed with her benign brain tumour in 1993.

The NHS explains that a benign brain tumour is a mass of cells that grow relatively slowly in the brain. As it is non-cancerous, the tumour tends to stay in one place, but will still need to be treated with surgery.

Somerville was treated at London’s Charing Cross Hospital a month after her diagnosis, with hardly anyone at ITN knowing of her illness in the hopes that she could return to her job as “quiet as possible” after recovering.

At the time, an article was printed in The Mirror, where Somerville gave some harrowing details about her ordeal.

It was reported that the newsreader had gone to bed one evening in August with a headache, but put it down to sunstroke due to holidaying in Devon.

Yet when she woke up in the morning, she found out some scary details that had happened during the night. She explained: “I woke in the bed feeling so strange.

“The room was full of people – the hotel manager, doctors, ambulancemen. I didn’t know why.

“Then later I found out that while I was sleeping I’d had a fit caused by a tumour which had been growing at the front of my brain near the optic nerve.”

Benign brain tumours typically have no symptoms, but due to how large it is and where it is located in the brain some individuals may experience some symptoms over time.

“An optician had checked my eyes a couple of months before and found nothing. So I’d no reason to suspect there was anything wrong.”

Yet contrary to her eye test a few months before, Somerville had a tumour the “size of a small orange” and was in need of surgery to remove the growth above her left eye.

She reportedly added: “They told me I was very ill. I’d bitten my tongue during the fit, so I was well aware it was something quite serious.

“But I had no idea what. I knew nothing of brain tumours and remember feeling quite calm and passive. That’s sometimes a consequence of a fit. It was also partly due to ignorance which was certainly bliss in this case.”

There are various different types if non-cancerous brain tumour, which are related to the type of brain cells that are affected.

The NHS provides examples of brain tumours including:

Neurosurgery is used to remove most benign brain tumours, after which they tend not to grow back. However there is the risk of individuals suffering from persistent problems such as seizures and difficulties with speech and walking after they come out from surgery.

Other treatment options include radiotherapy and chemotherapy, especially if the tumour is located awkwardly and all of it cannot be removed.

Chemotherapy is less frequently used to treat non-cancerous brain tumours due to it being a powerful medicine. Yet individuals who go through both chemotherapy and radiotherapy, can be given medication to treat some of the side effects from treatment.

Somerville reportedly stayed in hospital for 12 days following her surgery and luckily suffered from no long-term side effects. Following her recovery the newsreader remained at ITN until the early 2000s.