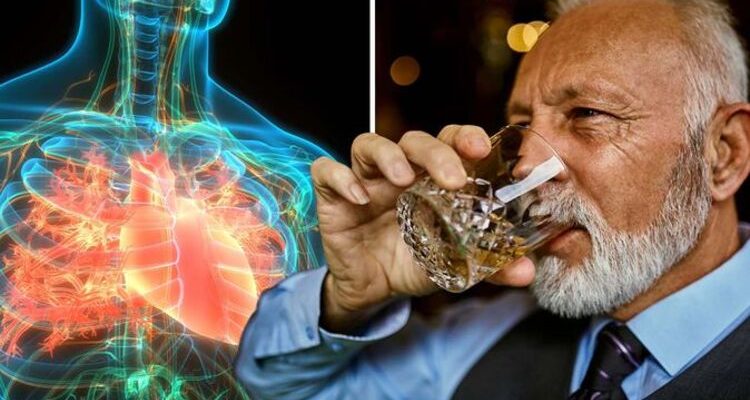 Heart disease is an umbrella term for conditions that target your heart or blood vessels. These conditions are usually triggered by a build-up of fatty deposits inside your arteries which can lead to a higher risk of blood clots. Heart disease is considered one of the main causes of death and disability in the UK, with more than 160,000 lives lost due to the killer.

When it comes to heart disease, the exact cause of the condition isn’t clear but there is plenty of things that could be boosting your risk, the NHS explains.

From diet to lack of exercise, there are obvious risk factors. But what category includes alcohol?

While the popular beverage is considered unhealthy as it’s been linked to a variety of severe conditions, including cancer, its connection to heart disease might not be that clear, according to a study by Monash University.

In fact, this “landmark” research had suggested that light alcohol intake was associated with a lower risk of the killer disease.

However, the researchers also warned that this might have to be taken with a pinch of salt as alcohol consumption was also linked to a higher risk of cancer, liver disease and more.

The study concluded that more research is needed to look at causal biological effects of alcohol on health and the possible advantages of social drinking and engagement.

This body of research stresses that one thing to consider is that light to moderate drinkers also tend to have healthier lifestyles than abstainers.

This aspect “likely accounted” for their better heart health, the study explains.

Looking at 371,463 adults, the study’s findings were consistent with earlier studies, stating that light to moderate drinkers had the lowest risk.

But this research team also noticed that these drinkers had healthier lifestyles, including doing more physical activity and eating more vegetables.

This research also applied a method called Mendelian randomisation, which uses genetic variants to determine whether an observed association is consistent with a causal effect.

After applying this technique, the results suggested a rise in heart disease risk even at levels deemed “low risk” by national guidelines from the U.S. Department of Agriculture.

These guidelines are set below two drinks per day for men and one drink per day for women.

The increase when going from zero to seven drinks per week was deemed minimal and grew with further alcohol consumption.

These research findings were further supported by an additional analysis of data on 30,716 participants in the Mass General Brigham Biobank.

The study concluded that cutting back on consumption can benefit even people who drink one alcoholic beverage per day.

However, these benefits “may be more substantial” for those who consume more.