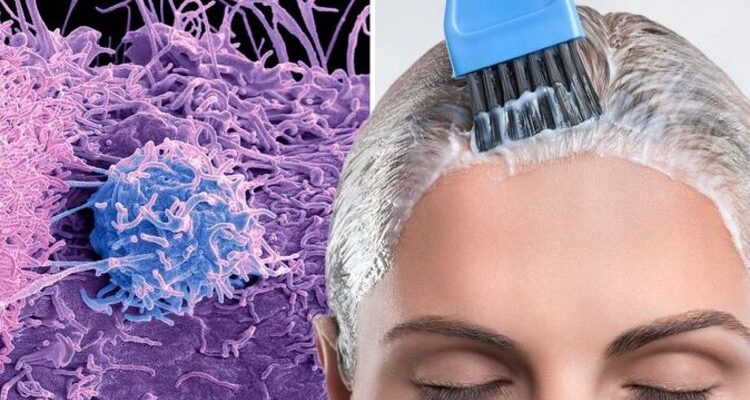 To be able to sell a cosmetic product in the EU, you need data on animal testing to meet safety standards, a toxicologist conducting safety assessment and the list doesn’t end there. The safety of hair dye should be pretty straightforward, but it’s not as black and white as the hair colour applied to your roots, explained Milly Ahlquist, Lush researcher and co-author of a new book True Colours: Hair Colouring for the Curious & the Cautious.

“Clearly, hair dye doesn’t represent the same sort of risk that smoking does,” said Ahlquist. “But such a high number of people do dye their hair that the numbers are still significant.”

When we talk about hair dyes and cancer, it all comes down to an increased risk, rather than causation. And the suspects behind this link are any permanent hair dyes that you pick up from the shelf in your favourite store.

Ahlquist continued: “The ingredients that we’re seeing commonly associated with an increased risk of cancer are aromatic amines.

“The most common [one] is called para-phenylenediamine (PPD) though it can be under other names on your ingredients list such as 1,4-Diaminobenzene and 1,4-Phenylenediamine.

“Its common derivatives are para-toluenediamine (PTD) and a newer derivative 2-methoxy-methyl-p-phenylenediamine (ME-PPD). These can also have different names.”

To put things in perspective, permanent hair dyes account for about 80 percent of the world’s hair dye market and about 70 percent of those contain PPD, she explained.

PPD, stashed inside your chosen hair colour box, is known as a primary intermediate. It reacts with hydrogen peroxide and oxidises, forming a dark colour.

“We don’t know why that is. It could be genetics; it could be because they’re using higher proportions of dark hair dyes which have the stronger chemicals.”

This hair dye ingredient was even “reclassified as poison” in the first half of the 20th century, with some countries restricting its use.

But this was later changed and PPD returned. When asked why people use something that was once considered dangerous, she responded: “Because it’s the quickest, most convenient, and most effective.”

Her book further explains that if the material in question can’t be proven to be either safe or unsafe, it remains in use until more information is presented.

Dr Emma Meredith, director-general of the Cosmetic, Toiletry and Perfumery Association (CTPA) said: “All cosmetic products in the UK, which includes hair dyes, are safe to use. Independent scientific bodies regularly review studies on hair dyes and no link has been found between the use of such products and any type of cancer.”

However, some studies are saying otherwise. Research published in the journal Anticancer Research suggests that personal use of hair dyes is associated with an 18.8-percent increased risk of breast cancer.

Another study published in the journal PLOS One saw even a higher risk of the same cancer marked at 23 percent.

Amanda Finch, health information manager at Cancer Research UK, said: “Although some studies suggest a link, they often involve asking people to remember which products they used, for how long and how often.

“Ingredients change over time and vary between countries, which creates a complex picture and doesn’t mean products cause cancer or that people should avoid them. Evidence shows personal use of hair dye doesn’t cause cancer.”

Ahlquist explained that carcinogenicity testing is “tricky” as you can’t give a person a potential carcinogen to see if it causes the deadly condition. This means that experts have to rely on animal studies and in vitro lab tests on bacteria or cultured cells. “And human exposure is very different,” she noted.

However, there are also “real-life” population studies, which present the majority of the cancer association data.

Large studies found that personal use of hair dye is associated with an increased risk of these cancers, in particular:

When you’re a hairdresser, the research adds even more cancer types, such as bladder cancer and acute myeloid leukaemia, to the gloomy list.

The reason behind this could be the frequency of use, Ahlquist shared. “Frequency appears to be very relevant. If you began to dye your hair before 1980, your risk of some of these cancers increases quite significantly.

“Long-term use, early first use, use of dark colours and use of permanent formulas also appear to increase the risk.”

Luckily, there’s plenty you can do to lower your risk. One of the possible solutions is opting for natural products like henna but these don’t offer a big variety of colours.

Other things she recommends are:

While some researchers like Kefah Mokbel claim “natural hair is the safest” option, others, including Cancer Research UK and CTPA, remind that hair dyes are strictly regulated in the UK and believed to be safe.