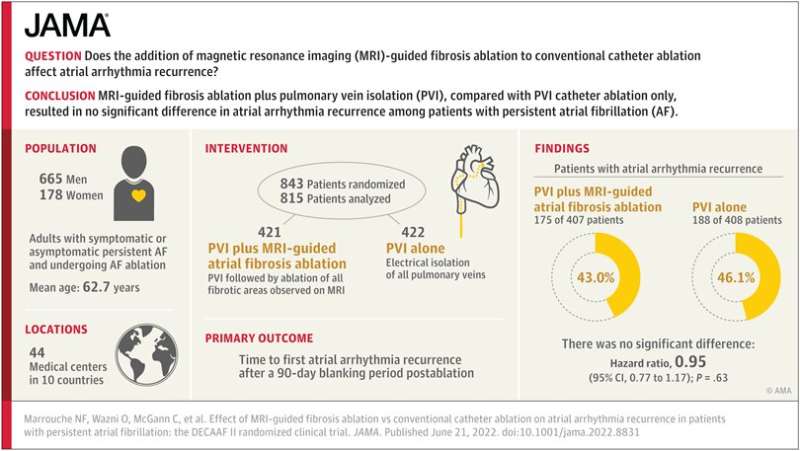 Results from one of the largest global studies of atrial fibrillation (AFib) procedures show that the simple approach is usually best when it comes to ablation, a procedure where physicians destroy or ablate cardiac tissue to correct irregular heart rhythms. The findings could change the way patients are treated for AFib.

Researchers from Tulane University and partner institutions found that using advanced image-guided technology to more aggressively target diseased areas of the heart that cause arrythmias didn’t lead to better outcomes for patients—and put some at higher risk of strokes, according to results of the DECAAF II trial published in JAMA.

“Simplicity is key. Don’t ablate too much, especially at advanced stages,” said lead study author Dr. Nassir Marrouche, director of the Tulane Heart and Vascular Institute and The Research Innovation for Arrhythmia Discoveries (TRIAD) at Tulane University School of Medicine. “Too much ablation is not helping our patients today. It is putting them at higher risk. This is a practice-changing finding from our study.”

AFib occurs when the upper and lower chambers of the heart are out of sync, causing the heart to beat irregularly. It affects more than 2.7 million Americans and is a leading risk factor for strokes. When AFib cannot be controlled by medication, doctors perform a procedure to ablate fibrotic or diseased areas of the heart with heat or cold to create a scar that disrupts the electrical signal that causes the arrhythmia.

For the study, researchers followed 843 AFib patients undergoing ablation treatment at 44 hospitals in 10 countries, including the United States, Germany, France and Australia. All the patients received magnetic resonance imaging (MRI) scans to quantify the amount of diseased tissue within their hearts. (Those with a higher percentage of diseased tissue are at higher risk for arrythmia relapse, according to findings from the original DECAAF trial.)

Half of the patients received standard care—pulmonary vein isolation (PVI) treatment where doctors ablate areas in the left upper chamber of the heart where the four lung veins meet.

For the other group, doctors used the MRI scans to create a detailed 3D map of all diseased areas along the left atrium of the heart. They performed conventional PVI treatment and then used the digital map to ablate diseased tissue more aggressively and precisely outside of conventional treatment areas.

All of the study patients received smartphone EKG devices to monitor their heart rhythms daily after treatment, and researchers followed up with them at 3-, 6- and 12-month intervals.

Researchers found no significant difference in arrhythmia recurrence between the two groups. However, the group that received the more aggressive treatment experienced a higher rate of poor safety outcomes with six patients (1.5%) suffering a stroke.

Marrouche said that the study shows that AFib patients with extensive fibrosis have too much scarring for aggressive ablative therapy to be effective using conventional tools. Researchers also suspect that it is not only the extent of fibrosis that played a role in the study outcomes. In evaluating hundreds of procedures by the world’s leading electrophysiologists, they discovered that there is little uniformity in how doctors perform ablation interventions, which may also contribute to disparate outcomes, Marrouche said.