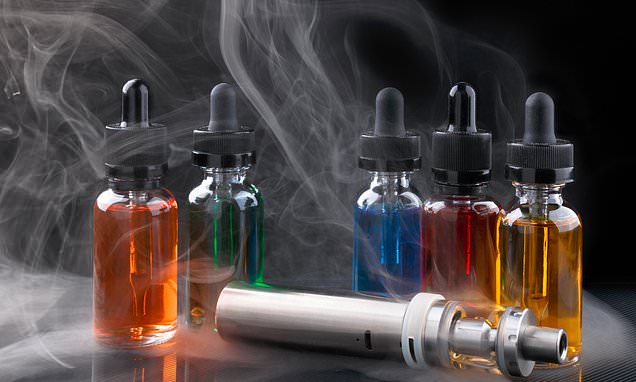 Flavoured e-cigarettes may worsen asthma, warns study amid the US vaping crisis that has killed eight people

The habit has skyrocketed in recent years, with the general consensus being it is much safer than smoking.

Black licorice, for example, triggered inflammation, which is linked to wheezing, coughing and breathlessness in patients with the chronic disease.

The research comes as a man in his forties from Missouri has become the eighth person in the US to die from using e-cigarettes.

Shocking figures show the number of people sickened by vaping has risen to 500, prompting an official investigation into the crisis. 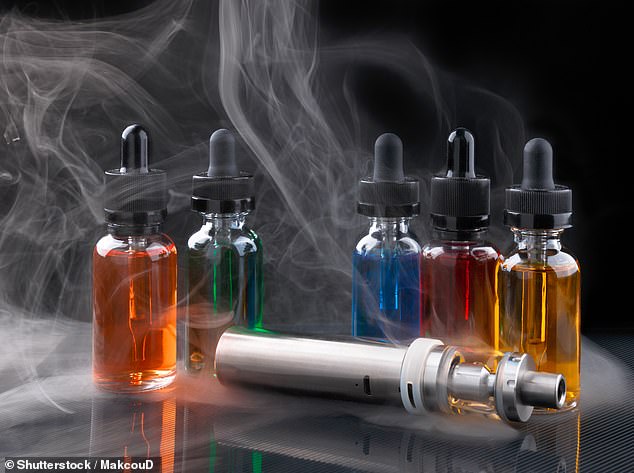 The study, published in the journal Scientific Reports, was carried out by experts at the University of Technology Sydney.

‘This is especially important for those with respiratory disease, whom are vulnerable to the effects of smoking,’ lead author Dr David Chapman said.

‘The majority of e-cigarette smokers use flavoured liquids but there is some evidence that flavour additives can be toxic when inhaled.

‘The exact effects on features of asthma were dependent upon the specific flavour, suggesting not all flavoured e-cigarettes will have the same consequences on lung health.’

E-cigarette use has increased dramatically in recent years. Fifteen per cent of high-school students in the US vaped in 2015, up from 1.5 per cent in 2011.

Vaping was thought to be safer than smoking due to tobacco not being burnt. But e-cigarettes still contain toxic compounds, the scientists warned.

HOW COULD VAPING BE HARMFUL?

The flavourings in electronic cigarettes may damage blood vessels in the same way as heart disease, according to research published in June.

The chemicals used to give the vapour flavours, such as cinnamon, strawberry and banana, can cause inflammation in cells in the arteries, veins and heart.

They cause the body to react in a way that mimics the early signs of heart disease, heart attacks or strokes, the study by Boston University found.

Other recent studies have also suggested smoking e-cigarettes could cause DNA mutations which lead to cancer, and enable pneumonia-causing bacteria to stick to the lungs easier.

Researchers at New York University subjected human bladder and lung cells to e-cigarette vapor, which is marketed as being healthier than tobacco.

They found the cells mutated and became cancerous much faster than expected and mice exposed to the vapour also suffered significant DNA damage.

The vapour from e-cigarettes helps bacteria which cause the condition to stick to the cells that line the airways, they said.

The effect occurs with traditional cigarette smoke and those who are exposed to air pollution high in particulates from vehicle exhausts.

Flavoured e-cigarettes are preferred by nearly all vapers under 30 and 70 per cent of older adults, the researchers wrote.

This is despite some flavoured additives being linked to cell damage in the airways.

Asthmatics may be particularly vulnerable to inhaling these toxic substances, the scientists added.

The researchers analysed a group of mice, some of which were allowed to breathe ‘room air’ for half-an-hour twice a day over 18 days.

The remainder were exposed to the e-cigarette aerosols Black Licorice, Kola, Banana Pudding and Cinnacide, both with and without nicotine.

On the first, seventh and last day of the experiment, the animals were either exposed to dust mites or a placebo water solution.

Three days after the trial ended, the rodents’ airways were assessed.

This is an exaggerated response of the airways to ‘nonspecific stimuli’, which causes them to narrow and become obstructed.

In contrast, all the flavours that contained nicotine reduced airway inflammation.

This is ‘consistent with the known anti-inflammatory properties of nicotine’, the researchers wrote.

The results suggest flavoured e-cigarettes could alter the function of the airways and increase the risk of respiratory disease.

The extent of that, however, depends on the specific flavour, the scientists wrote.

They stress they did not analyse the flavour additives directly to see exactly what ingredients they contained.

Past research suggests, however, e-cigarette flavours defined as ‘buttery/creamy’ or tasting like ‘cinnamon’ may be toxic.

The scientists are calling for more caution when promoting flavoured e-cigarettes to patients with respiratory diseases like asthma.

The team also want policy makers to consider restricting the use of flavoured e-cigarettes.

He had normal lung function until he started using e-cigarettes in May. The man began experiencing trouble breathing, which gradually got worse before he was taken to hospital on August 22.

ARDS is a life-threatening condition that stops the lungs from providing the body’s vital organs with enough oxygen. It occurs when the lungs become severely inflamed due to an infection or injury.

The Centers for Disease Control and Prevention (CDC), the Food and Drug Administration (FDA) and state health officials are investigating how e-cigarettes may trigger the illness.

The CDC said 530 confirmed and probable cases have been reported in 38 states in the US, up from 380 a week ago.

In the meantime, it advises anyone concerned about these illnesses not to vape. It is unclear what products any of the people who have died were vaping.

Vaping-related illnesses have affected Americans of all ages, but are more common in younger people who are not usually prone to lung disease.

Young adults between 18 and 34 account for a worrying 67 per cent of cases and 16 per cent of the vaping illness victims are under 18.

In most, if not, all, of these cases, what begins as shortness of breath and chest pain progresses to coughing, vomiting, fatigue, diarrhea, fever and weight loss.

Patients with the most severe cases wind up in the hospital with severely damaged lungs that often appear to be infected with pneumonia.

Sometimes they have to be placed on ventilators or in medically-induced comas.

CDC officials said many, but not all, of the reported and confirmed cases involved both THC – the psychoactive chemical in marijuana – and nicotine vaping.

Canada reported its first case Wednesday, a high school student who was on life support and has since recovered.

Michigan and New York have enacted bans on flavored e-cigarettes to discourage young people from using the devices.

The panel voted to adopt the prohibition, which applies to all flavored e-cigarettes besides menthol, Cuomo’s office said in a statement.

On Wednesday, the Michigan health department detailed its new rules.

Each state’s health department promised retailers two weeks to pull the newly designated contraband from their shelves before site visits to enforce the bans begin.

E-CIGARETTE DEATH TOLL RISES TO EIGHT IN JUST A MONTH

An Illinois man said to be using e-cigarettes to smoke THC died on August 24 after his lungs failed when he developed a mystery lung illness.

The second person to die after vaping was a ‘middle-aged’ Oregon resident.

They were said to have recently started using an e-cigarette containing cannabis oil from a legal dispensary and passed away sometime at the end of August.

A third victim in Indiana passed away from the mysterious lung disease in August.

The patient was described only as ‘elderly’ and little else is known about them.

The fourth victim, a 65-year-old man, died sometime in August but his death wasn’t confirmed until September 6.

Minnesota officials said the patient had been using the electronic devices to smoke THC.

A 55-year-old man from Los Angeles was the fifth person to lose his life after smoking the e-cigarettes. He died on September 7.

A woman in her fifties was the sixth person to succumb to vaping-related illnesses.

The Kansas-born woman, who had a history of health problems, passed away on September 12.

A California man became the seventh person to pass away after using the devices. The 40-year-old from Tulare County died on September 17.

The Missouri man in his forties became the eighth victim to die from vaping.

He had normal lung function until he started using the devices in May.

The victim began experiencing trouble breathing which gradually got worse before he was taken to hospital in St Louis on August 22. He passed away on September 19.