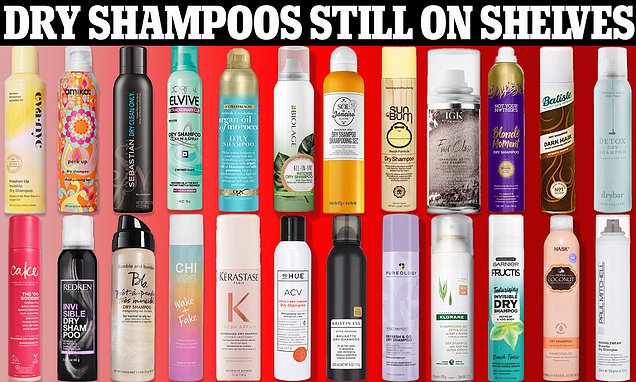 Even MORE dry shampoos found to contain cancer chemical: Study finds benzene is in 70 PER CENT of products on store shelves — despite recent recalls

Seven out of 10 dry shampoos still on grocery store shelves contain detectable levels of a cancer-causing chemical — despite recent recalls of dozens of popular brands.

Research by a laboratory in Connecticut tested a random sample of 148 different products sold in CVS, Walgreens and by online retailers like Amazon across the country.

Some 70 per cent were positive for benzene, a known carcinogen which is strongly linked to leukemia and other blood disorders.

Among those that contained the carcinogen were drug-store brand favorites Batiste and Not Your Mother’s — alongside premium brands Pureology and Kerastase.

Benzene levels varied by bottles, but nine were found to have at least 10 times the limit for Benzene. One product — Not Your Mother’s Beach Babe Texturizing Coconut — had nearly 80 times the threshold.

The Food and Drug Administration (FDA) — which regulates beauty and cosmetic products — told DailyMail.com today it was reviewing the findings.

Manufacturers including Church & Dwight — which makes Batiste — refuted the results , saying it had recently ‘confirmed’ with its suppliers that the dry shampoos don’t contain benzene.

It comes after millions of bottles of dry shampoo bottles from Dove, TRESemme and Bed Head were recalled across America last week after they were found to contain Benzene.

People who purchased the shampoos were urged to stop using them and visit the Unilever — the conglomerate that manufactured them — website for a full refund.

Benzene can be a contaminant in a dry shampoo’s propellant, made using petroleum products and used to launch the product out of the bottle and onto someone’s hair.

The chemical is often present in the environment after coming from car exhausts, cigarette smoke and industrial emissions — at much lower concentrations than those in dry shampoo. 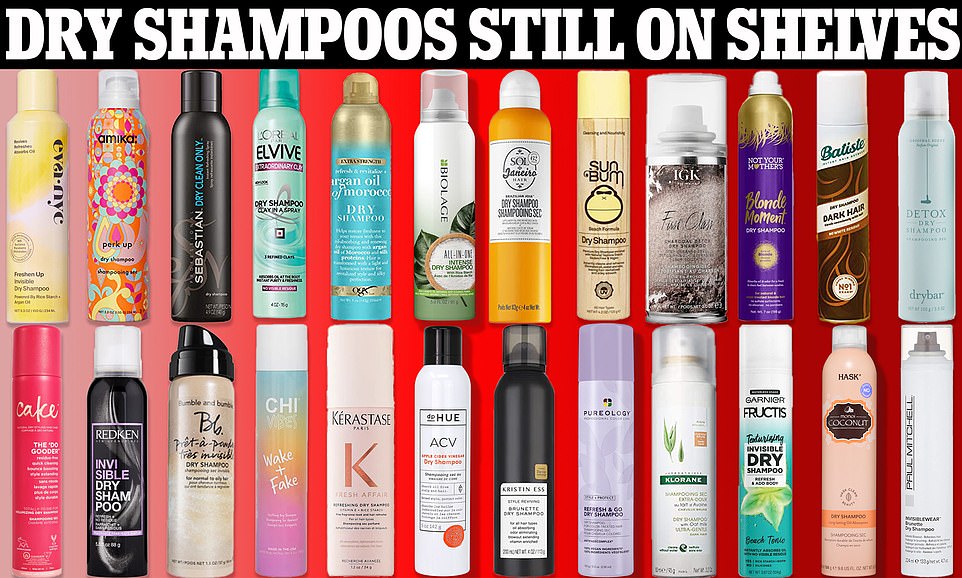 Pictured above are the brands where benzene – a known carcinogen – was detected in the products. Of those found to contain the chemical, about half had more than the maximum limit set by the Food and Drug Administration

Butane, a petroleum product, is a common propellant in aerosol spray cans. If not refined properly during the manufacturing process, the resulting gas could contain other components from the crude oil, such as benzene.

Benzene is at the top of the FDA’s list of dangerous solvents.

It is considered a ‘Class 1 solvent’ that ‘should not be employed in the manufacture of drug substances, excipients, and drug products because of their unacceptable toxicity’.

Inhaling or absorbing the chemical over a long period of time can have devastating health effects because it causes cells in the body to work incorrectly.

Benzene is a cancer-causing chemical, also known as a carcinogen, that is widely used in manufacturing in the US.

It is used in the creation of plastic, nylon, rubbers, paint and glue products.

It can also be found in tobacco smoke, motor vehicle exhaust and industrial emissions.

Long-term exposure to the chemical has been linked to severe damage to a person’s blood.

In has been linked to blood cancers like leukemia and non-Hodgkin lymphoma.

The chemical has also been linked to anemia.

Overexposure to benzene can also cause bone marrow not to produce enough red blood cells, which can lead to anemia, as well as blood cancer.

It can also wreak havoc on the immune system by altering blood levels of antibodies and killing off white blood cells.

Inhalation of a high concentration of benzene in the short term can cause a myriad of adverse effects such as dizziness, headaches, irregular heartbeat and, in certain severe circumstances, death.

The American Cancer Society says it raises the risk of someone developing cancer.

Benzene belongs to a class of chemicals called volatile organic compounds, which evaporate in the air.

The FDA says it is the responsibility of manufacturers to monitor benzene levels in their products.

It allows for a trace level of up to two parts per million (ppm) in products.

But the Environmental Protection Agency warns that inhaling just 0.4ppm of benzene increases your risk, resulting in one additional cancer case per 100,000 people.

The latest investigation carried out by Valisure and published online, found benzene in most dry shampoo products that were tested.

The independent lab bought dry shampoos from pharmacies across the US and then took them for testing.

The tests were carried out over a number of months, the researchers said.

The amount of benzene in products varied by spray and even bottles of the same brand — for those where it was detected.

They said the investigation found the ‘highest and most broadly detected levels of benzene to date’.

A total of thirty per cent of those checked had no benzene in them — including bottles from L’Oreal, Philosophy and American Crew.

But the vast majority were found to contain the carcinogen.

A food dye that may cause cancer in high doses could be lurking in children’s Halloween baskets, experts warn.

More than a dozen health and campaign groups wrote to the U.S. Food and Drug Administration (FDA) last week urging them to ban the red coloring that is prominent in popular candies.

Erythrosine, often known as ‘Red 3’, gives a distinct radiant red color, and is used by leading brands such as Brach’s, Tootsie, Pez, Jelly Belly and Peeps.

Since the early 1980s, studies have shown the additive can cause cancer in laboratory animals in very high doses, and has been linked to behavioral issues in children.

It was banned in cosmetic products in 1990 for these reasons, but still remains in many food and sweets, including pastries and breakfast cereals.

A pair of 2016 studies found Red 3 is in more than one in 10 candy products, and that more than 80 per cent of children under two had consumed it in the past two weeks.

The Center for Science in the Public Interest (CSPI), a Washington DC based consumer advocacy group, led a petition to the Food and Drug Administration (FDA) to ban the chemical last week.

The letter to regulators was signed by more than a dozen advocacy groups, including Breast Cancer Prevention Partners, Children’s Advocacy Institute and Consumer Federation of America.

Experts stress that the actual risk of cancer from Red 3 is minimal. The FDA explained that the risk of developing cancer caused by the dye is no larger than 1 in 100,000 over a lifetime of consumption.

For context, the danger posed by natural disasters is 70 deaths out of 100,000, while railroad accidents and air disasters are 6 deaths per 100,000.

For nine of the products tested, levels of benzene were more than 10 times the recommended limit.

Seven of these were from Not Your Mother’s, under the names: Toasted Coconut, Clean Freak Original, Clean Freak Unscented, Triple Threat Brunette, Plump for Joy Body Building Orange, Clean and Refreshing and Blonde Moment.

The other two were Paul Mithcell Invisiblewear Brunette and the Sun Bum Beach Formula.

Testing also revealed variation in benzene levels within the same product, which Valisure said suggested there were inconsistent mixing methods.

For example, one bottle of Not Your Mother’s Beach Babe Toasted Coconut had 79 times the recommended level in the first spray but 61 times this in the second.

Valisure CEO David Light said the results should be ’cause for significant concern’ because products are likely used indoors, where benzene ‘may linger and be inhaled’ for prolonged periods of time.

He added: ‘These and other issues identified by Valisure, including the detection of benzene in body spray, hand sanitizer and sunscreen products, strongly underscore the importance of independent testing and its need to be better integrated into an increasingly complex and vulnerable global supply chain.’

Asked about the results, Mr Light told CBS Moneywatch: ‘Thirty per cent had no detectable amount of benzene, so it can be made cleanly.

In a statement to DailyMail.com, the FDA said: ‘Manufacturers are responsible for the safety and quality of their products.

‘The FDA encourages companies and retailers to remove their products from store shelves and online marketplaces when benzene is detected. Consumers should immediately stop using any drug and cosmetic products that have been recalled.’

Batiste maker Church & Dwight suggested it had no plans to issue a recall at this point.

A spokesman told CBS that it was evaluating the report at the center of the recent claims.

‘When propellants had been reported to be the source of benzene in competitors’ recalled products, we contacted our propellant suppliers and confirmed with those suppliers that the propellants used in our Batiste products do not contain benzene.

The manufacturer of Not Your Mother’s, DeMert, said the report was ‘inconsistent with the data provided by our suppliers and the rigorous ongoing testing to ensure the safety and integrity of our products.

‘These tests show no traceable amount of benzene.’

It comes after Unilever — behind brands including Dove, Nexxus and TRESemme — recalled 1.5million products because they contained elevated levels of benzene.

The affected goods are aerosols made before October 2021 from brands Dove, Nexxus, Suave and TRESemme.