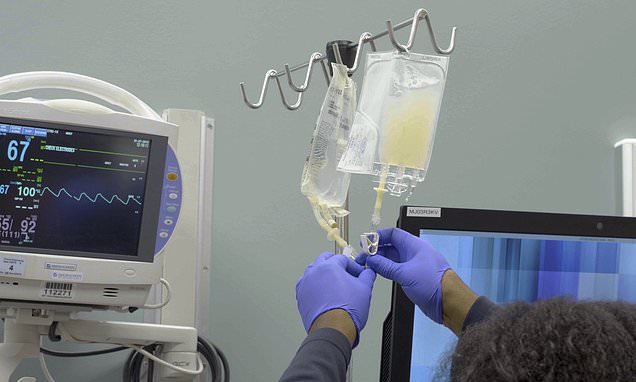 Doctors test CRISPR gene-editing tool on three American cancer patients for the very first time and say it is ‘safe’, but it’s too soon to know if it’ll improve survival rates

For the first time in the US, a gene-editing tool called CRISPR has been used to treat cancer in three patients.

The doctors took immune system cells from the patients’ blood and altered them genetically to help the cells recognize and fight cancer, with minimal and manageable side effects.

Two of the patients had multiple myeloma, a type of blood cancer, and one had sarcoma, a type of cancer found in the bones and soft tissue.

Researchers say their study was designed to see if the technology is safe and feasible, not if it will improve survival.

‘Now that we’ve shown it’s feasible and safe, we can open up this technology to the next generation,’ lead investigator, Dr Edward Stadtmauer, section chief of hematologic malignancies at the University of Pennsylvania Abramson Cancer Center in Philadelphia, told DailyMail.com.

‘I see this not just as a major advance, but the beginning of a whole new way to treat cancer.’ 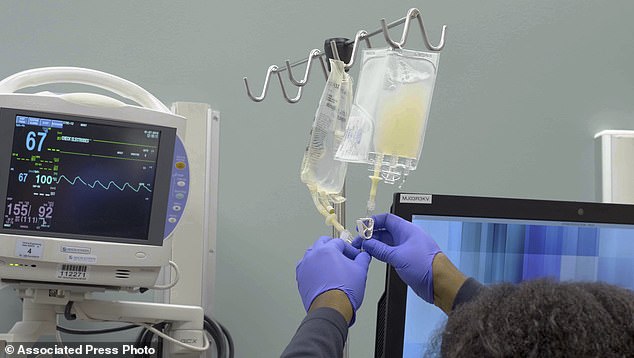 In a first for the US, researchers used the gene-editing tool CRISPR to genetically alter immune system cells in cancer patients to help the cells better recognize and fight the disease. Pictured: IV bags bags of CRISPR-edited T cells are prepared for administering to a patient at the Abramson Cancer Center in Philadelphia in January 2019

Permanently changing DNA through gene-editing has been hailed as a promising way to treat cancer.

CRISPR is perhaps the most buzz-worthy way to do so, by cutting DNA at a specific spot.

The tool has long been studied in laboratories and is being tried for other diseases.

Researchers say the new study is not aimed at changing DNA within a person’s body, but seeks remove, alter and give back to the patient cells that are super-powered to fight their cancer – a form of immunotherapy.

‘The idea here is…we take out the immune cells and insert genes – sort of a warhead [that] we engineer to attack [a] particular aspect of a cancer,’ Dr Stadtmauer said.

He notes that this kind of immunity boost, courtesy of CRISPR, has worked to treat other diseases such as sickle cell disease.

It’s so novel that it took more than two years for the UPenn team to get approval from US regulators to try it.

To treat their first three patients, the researchers extracted T-cells – a type of immune cell – from their blood and used CRISPR to delete three genes that might have been hindering these cells’ ability to attack the disease.

The T-cells were then ‘armed’ with what Dr Stadtmauer described as a ‘warhead’ that attacks an antigen found the surface cancer cells called NY-ESO-1.

‘We’re looking for a target that is found exclusively on the cancer and not any part of the body because you don’t want it attacking us, just the cancer,’ said Dr Stadtmauer.

Finally, the cells are processed to remove any signs of CRISPR before they’re inserted back into the patients.

All three patients in the study were in their 60s and had been treated with multiple standard therapies, such as chemotherapy, radiation and surgery, which failed.

Two of them were women diagnosed with mutiple myeloma and one was a man suffering from sarcoma.

‘These patients were chosen because they have diseases where NY-ESO-1 [is found],’ said Dr Stadtmauer.

‘The best result we’ve seen so far is stabilization of their disease.’

After two to three months, one patient’s cancer continued to worsen and another was stable.

The third patient was treated too recently to know how she’ll fare. The plan is to treat 15 more patients and assess safety and how well it works.

So far, within the three patients, the cells have survived and have been multiplying as intended to attack the cancer almost like an army.

‘When we started, we had limited ways to treat cancer,’ Dr Stastmauer said,

‘The best we could do is surgically remove the cancer, give radiation or increase doses of chemotherapy.

‘Now, over the last 20 to 30 years, there’s been a revolution in how to target cancer immunologically…that has been outstanding and there has been tremendous success and I think it’s because of our understanding of how the body works.’

The early results were released by the American Society of Hematology and details will be given at its annual conference in December in Orlando, Florida.

The study is sponsored by the University of Pennsylvania, the Parker Institute for Cancer Immunotherapy in San Francisco, and a biotech company, Tmunity Therapeutics.

Several study leaders and the university have a financial stake in the company and may benefit from patents and licenses on the technology.