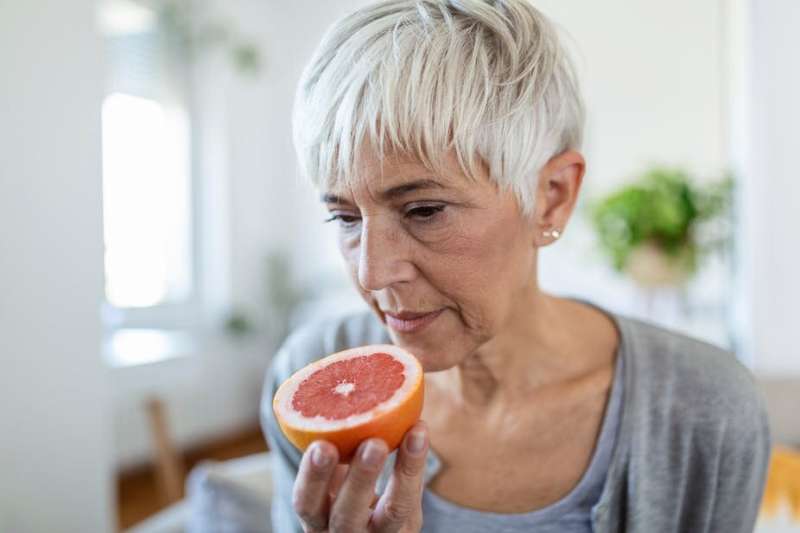 Early in the pandemic, multiple studies showed that about half of people with COVID lost their sense of smell (called anosmia) at some point during the course of infection. Roughly an additional 20% to 35% experienced a clinical reduction in their ability to smell (hyposmia).

Although more recent evidence suggests omicron might not lead to smell loss as much as earlier variants, given that more than half a billion people have had at least one of the variants to date, that’s still many millions of people who have probably experienced this condition to some degree.

For most, this is only a temporary loss of function. But a sizeable portion will experience longer-term problems. Recent studies show that 12 to 18 months after the initial COVID diagnosis, 34% to 46% of people are still experiencing a clinical reduction in their sense of smell. Most of these people are, however, not aware of this.

A related issue is parosmia, where a person’s perception of odors change, often finding they become more unpleasant. Research suggests that up to 47% of people who have had COVID could be affected. As with smell loss, most people with parosmia will likely heal over time. Yet some could have longer-lasting problems.

COVID isn’t the only condition that can lead to smell loss. For example, it can also be caused by other viruses or infections, head trauma, or a range of neurodegenerative diseases. While the evidence on post-COVID smell loss is still emerging, data from other types of olfactory dysfunction gives us an idea of some of the effects that long-term smell loss can have on everyday life.

People with this impairment are more likely to ingest spoiled food because it’s the smell, first and foremost, that warns us when something has gone off. This can increase the risk of food-borne illnesses.

Other than the core taste sensations (sweet, salty, bitter, sour and umami), nearly all of what we experience as taste is produced by odors reaching the odor receptors in the nose via the oral-nasal passage in the back of the throat. Unfortunately, without a sense of smell, most of what you eat will have little to no taste. Remove the ability to sense odors and an apple will taste just like a potato if you close your eyes.

Beyond giving us pleasure when eating, food odors also trigger our appetite. This means that when we can’t smell the aromas of dinner cooking in the oven, we’re less likely to get hungry.

The combined loss of appetite and pleasure from eating makes most people with a newly acquired smell disorder lose weight, initially. Our bodies are, however, designed to keep us alive. People with smell loss quickly begin seeking pleasure from other sensory stimuli when eating, such as texture, for instance in the crunchiness of fried food. And instead of waiting until they are hungry, many will simply eat more often. These non-conscious changes in eating behavior often result in weight gain, which can lead to long-term heart problems and other related health issues.

There are some consequences of smell loss you might not immediately think about. Take for example the fact that a person who can’t smell won’t be able to monitor their own body odor. This can be a source of self-consciousness and insecurity in social situations.

Several studies have demonstrated that a poor sense of smell is linked with a reduction in reported social interactions, number of friends and sexual enjoyment. The latter could also be related to the loss of ability to sense the scent of a partner.

One-third of people seeking treatment for their smell problems report experiencing a reduction in their quality of life and general well-being, compared with before they were having these problems. This is likely due to a combination of the factors outlined above. People with smell dysfunction often report symptoms of depression, and it’s not uncommon that they link these to their smell problems.

Sadly, few treatments exist for people experiencing smell dysfunction. For virus-induced smell problems, the only treatment that has some demonstrable effect is smell training. This is a bit like physiotherapy for the nose and consists of exposure therapy, where the patient is asked to smell a range of odors for about 20 minutes, each morning and evening, over a period of two to three months. Although patients will seldom make a complete recovery, studies have shown that smell training does improve olfactory functions with time.

That said, the COVID pandemic has given olfactory research a push forward, and several interesting new treatments are currently in pre-clinical trials. Within a few years, it’s possible that we will see a range of novel treatments for smell dysfunction.