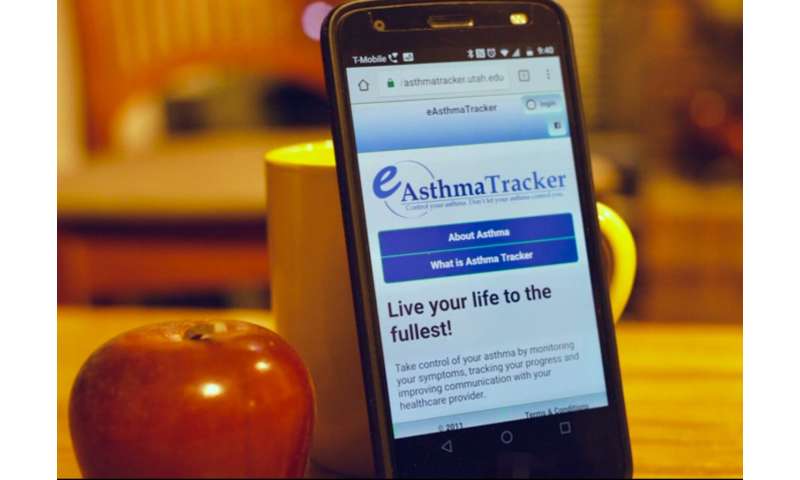 An app that allows parents and doctors to monitor a child’s asthma has a big impact on managing the disease. When families monitored symptoms with eAsthma Tracker and adjusted care accordingly, children had better asthma control and made fewer visits to the emergency department. Using the app also meant that children missed fewer days of school and parents took fewer days off work, improving quality of life. Results of the study were published online in the journal Pediatrics.

“It’s exciting to see that using an effective app can not only help improve the lives of children with asthma and their parents, but also allow their providers to give optimal care,” says the study’s lead author and University of Utah Health professor of pediatrics Flory Nkoy, MD, MS, MPH. He and his team created the app and carried out the research along with collaborators at Intermountain Healthcare and Parent Partners in Salt Lake City.

Despite effective treatments, keeping asthma in check can be particularly tricky. An attack can come seemingly without warning and up to 40 percent of children hospitalized with asthma wind up back in the hospital within a year. A major contributing factor is that signs that precede an attack often go unnoticed.

Scientists and physicians at U of U Health designed eAsthma Tracker as a way to continually monitor a child’s disease. Asthma care is typically reactive, focusing on treating recurrent attacks, says the study’s senior author and U of U Health hospitalist Bryan Stone, MD, MS. While most children with asthma show signs days to weeks before an attack, parents can easily miss these changes. eAsthma Tracker allows for monitoring at home, opening an opportunity to observe worsening signs and intervene in time to prevent a flare-up.

A unique feature of the app is that it sends parents and doctors data in real-time, and triggers an automated alert when a child’s asthma is acting up. When that happens, the app prompts parents to make an appointment with the child’s doctor. A doctor receiving an alert may decide to proactively call parents to determine how to address the issue.

“Parents love the idea that they can see how their child is doing and that their doctor is on the other end of the app and working with them,” says Stone.

Families who use eAsthma Tracker fill out a brief weekly online survey based on a standard assessment called the Asthma Control Test. The app assigns a score reflecting whether asthma is impeding the child’s daily activities and how often they’re using medication to control symptoms. It then issues recommendations dependent on being categorized as severe (red zone), under control (green zone) or approaching severe (yellow zone).

More than 300 children and parents at 11 clinics throughout Utah enrolled in the study designed to determine whether the app improved patient outcomes. Researchers found that children who used the app:

In addition, their parents missed 70% fewer days of work.

Three months after starting to use the app, children and parents showed improvements in all measurements, and the benefits persisted 12 months later.

The main limitation of the study was the lack of a control group pulled from the same clinics that study participants were recruited from. Although design of this part of the research was not optimal, the reasoning behind the omission was intentional. Based on promising results from a pilot investigation, the parent and community stakeholders that helped design the research recommended against withholding the app from willing participants.