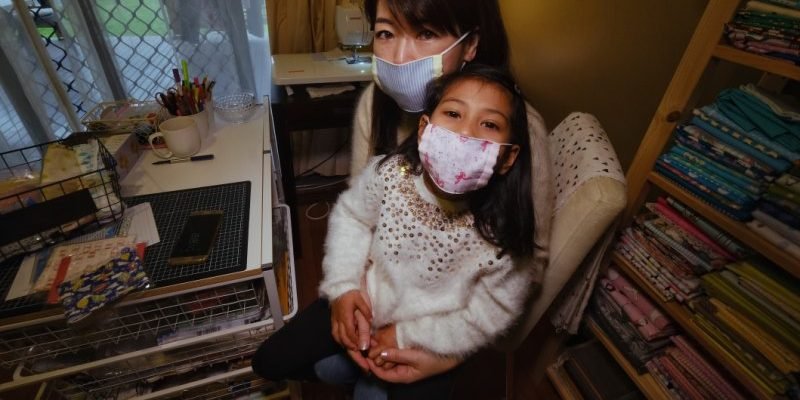 During flu epidemics in China and Japan scores of people wear face masks to prevent the spread of infection.

As Australia enters a deadly flu season could the practice of wearing face masks be adopted here? 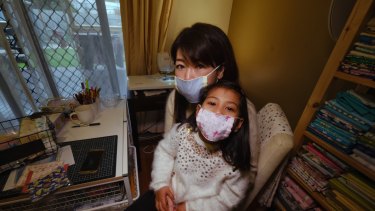 "They would ask 'where did you get that?' and after getting a lot of feedback I decided I would start selling them," the Altona mother-of-one, who now runs her own online store My Little Momo, says.

Since 2017, Ms Nakamoto has sold dozens of the masks.

Each mask takes about fifteen minutes to sew and they are made from a cotton fibre called 'Japanese double gauze' which can be washed and reused.

Ms Nakamoto says she has observed a recent surge in sales in the last few months in the wake of the Victoria's horror summer flu season, with the number of diagnosed flu cases up from 2200 at this time last year to 10,683 so far this year.

"A lot of the time people are buying them because they want to prevent themselves or their children from getting sick with the flu or spreading their germs," she says.

"I've also sold some to cancer patients who are going through chemotherapy who want to protect themselves."

Does wearing a surgical mask prevent the flu?

Evidence suggests that, when sick, wearing a mask can help protect others from getting sick.

But the masks are not foolproof.

"Many of the surgical masks that people use are not designed properly to filter out very small particles so if the flu virus is floating around it could potentially get through it," Professor Stephen Turner, head of Monash University's microbiology department, says.

But he adds a surgical mask could limit the spread of influenza, if for example, a person with the virus was wearing a mask when they were sneezing in a public place.

In a 2013 study in America researchers counted the number of virus particles in the air around patients with flu and found that surgical masks decreased the exhalation of large viral droplets significantly, but was less effective against the fine viral droplets that can remain suspended in the air longer and are therefore more infectious.

Doherty Institute head virologist Associate Professor Aeron Hurt says while face masks have some potential to stop the spread of viral particles the practical nature of wearing them often means they are not effective.

Why do people wear surgical masks?

Generally people who wear face masks do so when they are unwell to prevent others from becoming sick, Associate Professor Hurt says.

"One of the difficulties of surgical masks is that they can become quite uncomfortable to wear," he says.

"They also quite quickly become saturated with the moisture in the breath and because of their discomfort people often start touching in and around their face more than they would do if they weren't wearing a mask. But touching their faces more can actually spread influenza through touch and contamination of surfaces."

Does taking more Vitamin C and other home remedies work?

There is no shortage of advice around on how to prevent influenza, including taking more Vitamin C, but Associate Professor Hurt says there is not enough robust scientific evidence to support the effectiveness of those measures.

"We don't have studies that are as rigorous as we would normally use to evaluate medicine to tell us whether these types of things work well enough," he says.

"Trials with things like Vitamin C, elderberries, garlic or mother's chicken soup … haven't been evaluated to the type of level we would expect of medicine so it's very hard to know if they work.

"But there's no doubt being fit and healthy, having good hygiene, washing your hands regularly and having a healthy lifestyle which involves eating well does aid immune response."

Associate Professor Hurt says the most effective way to prevent the flu is to get vaccinated.

"Our best measure for preventing infection is to be vaccinated," he says.

"The way that vaccines work is that they generate antibodies and what that means is when we do become infected with the virus our bodies can react very quickly with an immune response and we can fight off the virus, hopefully before we start to develop any symptoms. In effect, this stops the ongoing transmission."