The coronavirus disease 2019 (COVID-19), caused by SARS-CoV-2, has been an unprecedented crisis over the past two years, devastating the lives of millions of people. SARS-CoV-2 invades the host cell by attaching to the angiotensin-converting enzyme-2 (ACE2), which acts as the primary functional receptor for cell entry for SARS-CoV-2 and SARS-CoV.

Lately, studies have reported that the cluster of differentiation 147 (CD147), also known as basigin (BSG), could be an additional receptor for SARS-CoV-2. While the mechanism of SARS-CoV-2 interaction with CD147 is debated in the scientific community, it is thought that CD147 could still have a potential role in the clinical course of COVID-19, even if it is not a functional entry receptor. 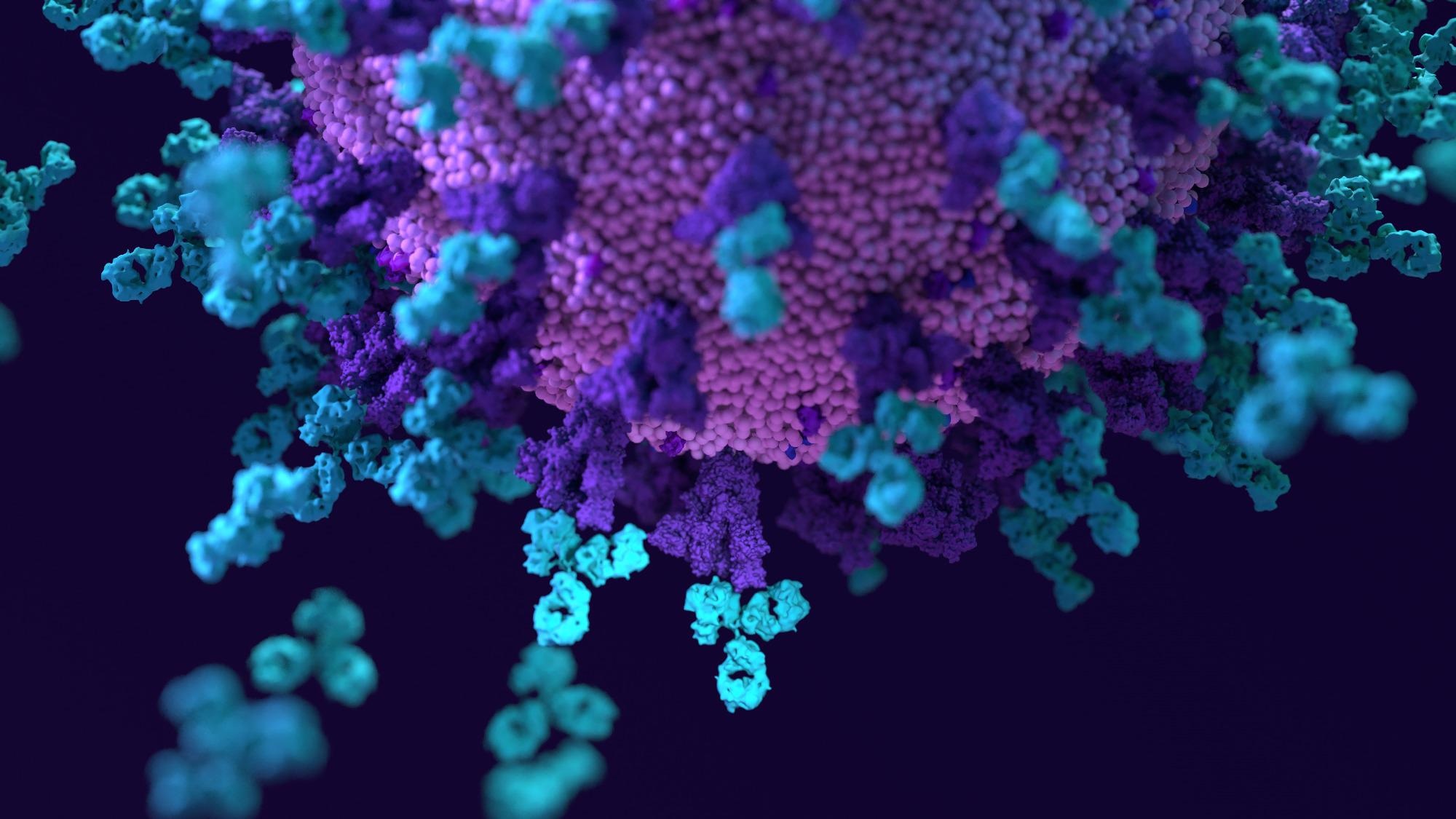 The study and findings

In the present study, researchers knocked in a humanized CD147 (hCD147KI) in the NOD-SCID-IL2Rγnull (NSG) mouse model, which lacks functional natural killer (NK) cells, B and T lymphocytes.

The human CD147-encoding complementary deoxyribonucleic acid (cDNA) was knocked-in targeting the exon 1 of mouse CD147 on chromosome 10 under the control of the endogenous Cd147 gene. The resultant knock-in created a fusion protein that contained 22 amino acids of the mouse CD147 signal peptide and the remaining 23-385 amino acids of the human CD147. Transcription termination was mediated by a bovine growth hormone polyadenylation signal sequence.

Embryos of NSG mice were targeted by injecting the target vector and CRISPR-associated protein 9 (Cas9) complexed with a clustered regularly interspaced short palindromic repeats (CRISPR) single-guide RNA (sgRNA) for cleaving the target sequence. They found fertile female mice that transmitted the knocked-in allele to offspring, while hCD174KIhet-NSG males were less fertile and precluded the generation of hCD174KIhomo-NSG mice. Therefore, hCD174KIhet-NSG mice were further evaluated. A similar model for human ACE2 (hACE2) was generated downstream of the mouse Ace2 gene. The 5’ untranslated region (UTR) and first 15 amino acids of mouse Ace2 were retained, and the rest of the sequence was replaced with hACE2 cDNA. Cas9-sgRNA and the plasmid vector were injected into NSG embryos. 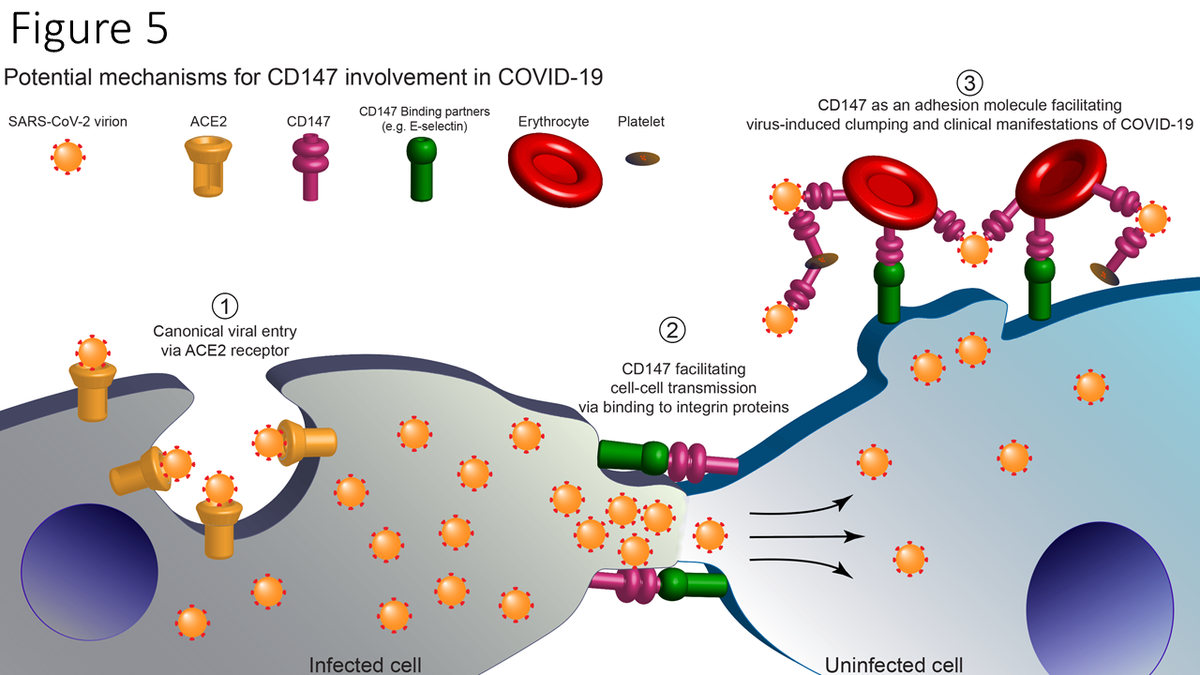 Organs from adult hCD174KIhet-NSG and wild-type NSG littermates were harvested and stained for hCD147 by immunohistochemistry. Robust and specific hCD147 expression was noted in several tissues in knock-in mice compared to wild-type. Moreover, in some tissues, the expression of hCD147 in knock-in mice was similar to mouse CD147 in wild-type mice. The hCD147 knock-in mice were infected with SARS-CoV-2, and in parallel, hACE2KIhomo-NSG mice were also inoculated with the virus. The hACE2KIhomo-NSG mice had ruffled fur and displayed significant weight loss relative to wild-type NSG mice indicating the success of establishing a physiologically expressing knock-in NSG mouse. The hCD174KIhet-NSG mice exhibited a similar trend attaining significance at day 4 post-infection. However, whereas hCD174KIhet-NSG mice substantially regained weight to initial levels by day 7, hACE2KIhomo-NSG showed no such recovery from weight loss.

Lungs were harvested from each mouse seven days after infection for further molecular and immunohistochemical analysis. A 100,000-fold increase in the SARS-CoV-2 nucleocapsid (N) RNA levels was observed in hACE2KI-NSG mice compared to wild-type NSG mice. In addition, a 65-fold increase in viral RNA was noted in hCD147-NSG mice relative to wild-type mice, supporting that CD147 might have an ancillary role in COVID-19.

Furthermore, the researchers found the SARS-CoV-2 spike protein’s receptor-binding domain (RBD) localized in the bronchiolar epithelial cells across all infected lines by immunofluorescence and immunohistochemistry. Overall, the hACE2KI-NSG mice had significantly higher mean fluorescence intensity relative to wild-type NSG mice, whereas no differences were found between hCD147KI-NSG mice and wild-type controls.

The study’s findings support that hCD147 might play an ancillary role in COVID-19 infection. The apparent lack of elucidation of the mechanism by which CD147 facilitates SARS-CoV-2 entry or replication needs to be noted; future studies might be able to address the limitations.

Research Square publishes preliminary scientific reports that are not peer-reviewed and, therefore, should not be regarded as conclusive, guide clinical practice/health-related behavior, or treated as established information.

Tarun is a writer based in Hyderabad, India. He has a Master’s degree in Biotechnology from the University of Hyderabad and is enthusiastic about scientific research. He enjoys reading research papers and literature reviews and is passionate about writing.