You’ve done it. You set out to lose weight, and by overhauling your diet and upping your physical activity, you’re down to a healthy weight. You’re sticking to a 2,000-calorie daily diet and maintaining a healthy lifestyle. But then, almost inevitably, it happens: weight regain. What began as a weight loss success becomes more complicated, and you start to rebound—the numbers climbing slowly up. You end up right back where you started, or even worse. So what’s going on? And more importantly, how can you stop it?

The truth is that your body quite literally fights against losing weight, explains Bruce Y. Lee, M.D., executive director for the Global Obesity Prevention Center at John Hopkins University. That’s because when you start dropping pounds, your body perceives it as a threat to your survival. In order to “protect you,” it slows your metabolism down to fight the weight loss, he explains.

It goes way back to our caveman days, when food was more scarce, says Wendy Scinta, M.D., president of the Obesity Medicine Association. The part of your brain that controls your appetite has been around for a very long time, while obesity, in comparison, is a new epidemic that our bodies haven’t evolved to fight just yet.

Research suggests that losing weight, especially very quickly, can easily lead to weight re-gain, says Dr. Lee. “If you rapidly lose weight, you can rapidly gain that weight back,” he adds.

The good news is, there are some things you can do to combat the vicious cycle. Here are six reasons why the pounds are piling back on—and what you can do to get back on track right now. 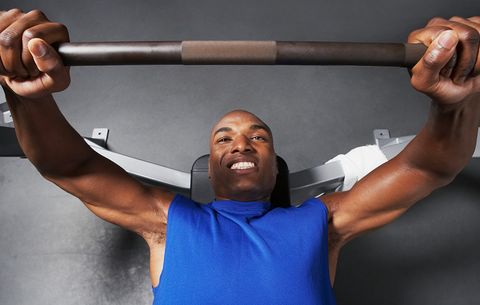 Trying to maintain weight loss with a slower metabolism can, understandably, be a battle since you’ll have a harder time burning calories.

Even if you’re careful about eating enough protein while you lose weight, it’s still likely you’ll lose some muscle as you drop weight, which is a problem, says Dr. Scinta. Muscle is metabolically active tissue, so you’ll burn more calories at rest. In fact, gaining muscle mass is one of the only ways you can boost your metabolism, she says.

The fix: Cardio can certainly help you shed pounds, but strength training should be added into the mix. Aim for a minimum of three days of resistance training per week, says Brad Schoenfeld, Ph.D., C.S.C.S., an assistant professor in exercise science at Lehman College, . This will help preserve, or even increase, your lean mass while you eat fewer calories.

Eating enough protein is crucial, too. It keeps you feeling fuller for longer and has a greater thermic effect, meaning your body burns more calories digesting it than carbs and fat, he says. Shoot for roughly 1 to 2 grams of protein per kilogram of bodyweight, says Dr. Sctina, and spread your intake throughout your day, aiming for about 30 grams per meal. (You can easily get that through a few eggs and some Greek yogurt at breakfast, a cup of beans in your salad at lunch, or 3 ounces of beef at dinner.)

You’re Eating More Than You Realize 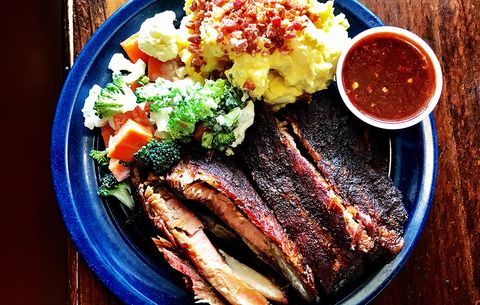 When you lose weight, your hunger hormones, like ghrelin, increase, while the hormones that make you feel full, like leptin, take a dip, says Dr. Scinta. So along with your slower metabolism, you’ll feel ravenous, too.

And if you loosen the reins on the diet that helped you lose weight, you can easily gain pounds back after you give up on it, especially if you followed a strict eating plan (say, like the Whole30 diet), says Dr. Lee. You’ll likely go right back to your old eating habits or indulge in foods you couldn’t eat on your diet. That’s not uncommon; in fact, one study showed that one-third to two-thirds of dieters regain more weight than they lose on their diets. Getting beyond the dieting mindset is key to keeping off the weight.

The fix: If you step on the scale and notice it’s up even just five pounds, that can quickly escalate, says Dr. Scinta. If you think what you’re eating is the culprit, try logging your meals in a journal or use an app like MyFitnessPal to start keeping track of your intake again. This will help you figure out where you’re slipping up.

Related: Everything You Need to Know About the Ketogenic Diet 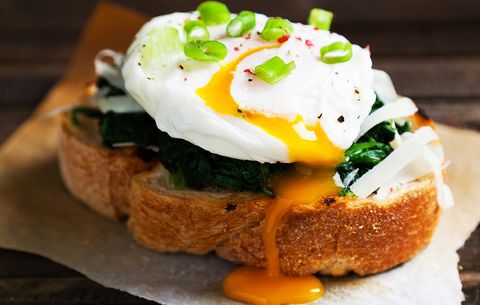 It’s called the most important meal of the day for a reason. Eating breakfast helps keep your metabolism chugging along throughout your morning, says Dr. Scinta. The longer you wait, the more your blood sugar levels will dip, she explains, which means you’ll likely reach for refined carbs and sugary foods, like bagels or soda, later on in the afternoon.

The fix: In a study published in the journal Obesity, researchers found that downing a protein-rich morning meal not only fills you up, but also makes you less likely to snack by squashing your cravings, too.

Try to eat something simple that you can take on the go, suggests Dr. Scinta. If you’re not one to whip up a bowl of oats or scramble up some eggs, glug a shake that includes at least 30 grams of protein, she says. This will help stabilize your blood sugar and keep you feeling full until lunch without the hassle of prepping a sit-down meal. (Try adding our favorite whey protein powder into one of these delicious smoothie recipes.)

You’re Eating Too Late in the Day

While eating breakfast helps re-energize your body after waking, there’s some evidence that late eating can undercut your weight goals. One small study showed that female participants lost weight at different rates depending whether they’d eaten a large meal before or after 3 pm. A follow-up study found that eating a big lunch at 1 pm led to more calories being burned while resting than a similar meal eaten at 4:30 pm. So it’s important not just how many calories you eat, but when you eat them.

The fix: Making a meal schedule and sticking to it can keep you from panic-eating later in the day when your body is settling into a low-calorie burning mode. And creating a daily routine of when and how much you eat can help you stave off the temptation to snack between meals.

You’re Drinking With Your Meals

It’s a common understanding that drinking alcohol leads to weight gain, but the facts are a little more complicated. Even small amounts of alcohol, research shows, drastically cut the amount of fat your body burns for energy. At the same time, moderate drinking—even two glasses of wine a day—has been shown to have little effect on weight gain. But studies show that drinking with a meal tends to lead to over-eating, another way that excess calories can sneak into the body.

The fix: Moderate drinking isn’t a problem; thoughtless drinking can be. AS with so many things on this list, the fix is to be conscious about your actions. If you want to have a couple glasses of wine, make it an activity separate from eating, and pay attention to your intake. 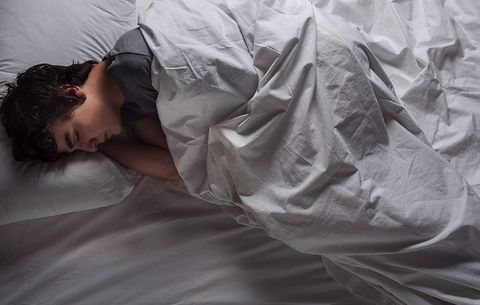 Sleep affects the number on your scale, says Dr. Scinta. In fact, an analysis of 28 studies published in the European Journal of Clinical Nutrition found that that people who slept an average of 3 to 5.5 hours a night ate an extra 385 calories the next day compared to people who got 7 to 12 hours of shuteye—and the foods they tended to pick were high in empty calories.

That’s because the less you sleep, the higher your hunger hormones get. “Now, your ghrelin is already higher, so when you don’t sleep it gets even worse, and you’re going to go through the day even hungrier,” she says.

Plus, when you don’t snooze for long enough, your body doesn’t restore its serotonin levels, a hormone that keeps your mood in check. “When it’s low, you’re going to try and replenish it with foods that make you feel good, like refined carbs and sweets,” says Dr. Scinta.

The fix: Your body optimally needs seven to nine hours of sleep per night, according to the National Sleep Foundation. If you’re consistently hitting less than that, check out these five ways to sleep better every night.

Related: 5 Foods That Will Help You Fall Asleep

Your Friends and Family Are Bad Influences 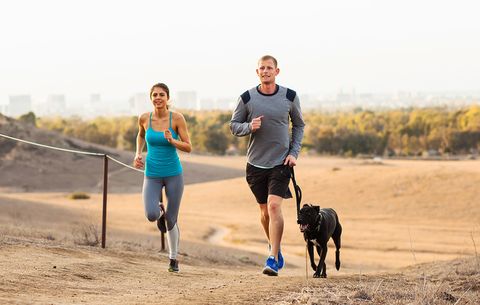 Your surroundings have a huge influence on your eating habits, and that includes the people you interact with every day, says Dr. Lee, like your friends, family, coworkers, and significant other.

“We tend to be more likely to eat what they eat,” he says. “If, for instance, you are on a healthy diet or you want to be a vegetarian, but all your friends are not vegetarian, it’s really hard to go against the grain like that.”

Plus, studies have shown that when you hold yourself accountable with another person, you’re more likely to maintain your weight loss, says Dr. Scinta. So if your girlfriend loves to go out to eat, try telling her you’d like to start cooking at home as a way for both of you to make better choices. If you make it clear that it’s important to you, she’ll be game.

Related: 11 Core-Sculpting Exercises You Can Do With Your Swolemate

You’re Too Hard on Yourself 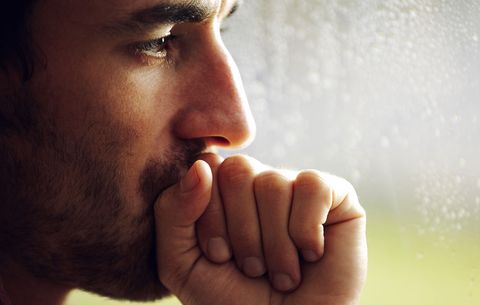 Your weight is bound to fluctuate a bit, even after you’ve met a certain goal, says Dr. Lee, but that shouldn’t frustrate you to the point of calling it quits.

“Many times, people lose weight and starting regaining a bit, and they go through these psychological cycles that impede them,” he says. “They think, ‘Oh my goodness, I’m a failure,’ and then they just give up.” Once you fall into that mindset, you’ll eventually get right back to your starting point, he says. It’s easy to find yourself slipping into emotional eating, rather than sticking to what’s healthy.

The fix: Reevaluate why you want to lose weight in the first place, says Dr. Lee. Instead of nailing your goals down to the pound, think about the overall direction you want to go and what motivates you to keep going. Losing weight will make you look great, sure, but your health should always be your main priority, he says.

“If you’re yo-yoing back and forth, you may not get the benefit of reducing your risk of cancer, heart disease, joint problems, and other chronic diseases linked to obesity,” he says. The thought of a longer, healthier life? That will help you focus.