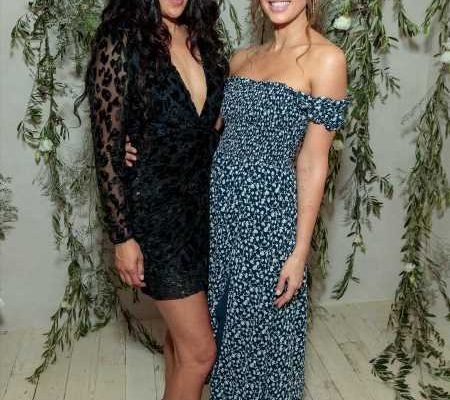 The saying goes that, “Behind every successful woman is herself.” But as Jessica Alba and Shani Darden know, sometimes there’s also a best friend there backing her up.

At the launch party of Darden’s brand-new skin-care studio in Beverly Hills, California, on Thursday night, the Honest Company co-founder and expert esthetician were both on hand to explain how they’ve been by each other’s sides for more than a decade — before their kids were born and when each of their respective businesses were just ideas.

“[Neither] of us were born into privilege,” Alba, 38, tells PEOPLE exclusively. “We figured it out. People can only see the shiny, fun side of it — and that’s great — but they have no idea the journey that got you here.”

“This is a story of friendship,” she adds. “It’s a story of resilience. It’s the story of a girl who had a dream.”

Darden had been Alba’s go-to facialist for years at a salon in Los Angeles, but the two didn’t really talk until they found out that they were both pregnant with their first children around the same time.

“I had to see [Shani] a lot because my skin was messed up when I got pregnant with Honor [because of] my hormones,” Alba tells PEOPLE. “But I also told her I was pregnant before anybody knew because I couldn’t use any products … and then, my last facial, she was like, ‘You probably won’t see me here because I’m pregnant.’ “

At the time, Alba didn’t have any other friends who were moms or pregnant yet, so the two instantly bonded. “After that whole situation, she started inviting me to all baby things,” Darden says. “That’s how we became friends.”

Since Alba had trouble finding products to use that’d be totally safe during her pregnancy, the idea for her wellness company, Honest, was born.

“So many people don’t realize that Jessica came up with Honest totally on her own,” Darden says. “At the time, we were just new friends, and I remember her having the idea and sending [me and all her closest friends] 8 million emails a day like, ‘We’re not using this, we’re only using wood, no shoes in the house … ‘ She would be this crazy person about it, and I think people don’t realize that was all her.”

As Alba grew her company and Darden grew her clientele — which now includes stars like Lea Michele, Emmy Rossum and Kelly Rowland — by doing facials in the back house of her property, they were also growing their families and quickly starting to realize the pressures of being working moms.

“Everyone’s like, ‘If you could have a superpower, what would it be?’ I would love to clone myself,” Alba jokes to PEOPLE. “I want to be everywhere.”

Darden adds, “I’m crazy, but you work so much that it’s hard. She has a little baby, she’s got three kids. So it’s hard when you’re not there.”

The actress is now mom to son Hayes Alba, 17 months, plus daughters Haven Garner, 7½, and Honor Marie, 11, whom she shares with her husband, Cash Warren. Darden, on the other hand, has two daughters of her own.

“Your kids watching you go through the process of failing and pivoting and moving forward and facing challenges, and figuring it out shows them resilience,” Alba continues. “It shows them that they can then have an idea and create the reality that they want to have.”

“I think that’s very important and something that people don’t always talk about with women. People always talk about that with men and people are never asking men, ‘How do you have a family and have a career and how do you balance it all?’ “

When it comes to the difficult parts of her journey, Alba isn’t afraid to make that known to her kids. “I feel like both of us are very conscientious of being appropriately honest with our children about the journey,” she says.

Inked-Up Mama! Jessica Alba Gets Three Zodiac Tattoos in Honor of Her Kids

“It’s not always easy, and people aren’t going to hand you something. If you want anything, you got to work at it,” adds the L.A.’s Finest actress.

Darden credits Alba for being the push she needed to open her new skin-care studio, which has four rooms where clients can get treatments including custom peels, LED-light-bed therapy and an Honest facial using Alba's products.

“I always needed to be pushed because so much of this is uncomfortable for me,” Darden tells PEOPLE. “I wouldn’t have done this. It has been a great journey, and it’s truly about our friendship.”

Jessica Alba Takes Us Inside Her Life, From Diaper Changes to a Day on Set

Now, both women are also focused on making sure their own daughters have a healthy understanding of beauty as they grow up in the public eye.

“I want my girls to be proud of the nooks and crannies that make them, them,” Alba says. “I don’t want them to feel like they need to alter who they are to feel good about themselves.”

“It’s celebrating them as their imperfect perfect selves, because the idea of perfection is crazy — it’s only society telling you that you need to be something that you’re not,” Alba says. “What is actually perfect is the thing that makes you unique. And so we always try to encourage that in our kids.”