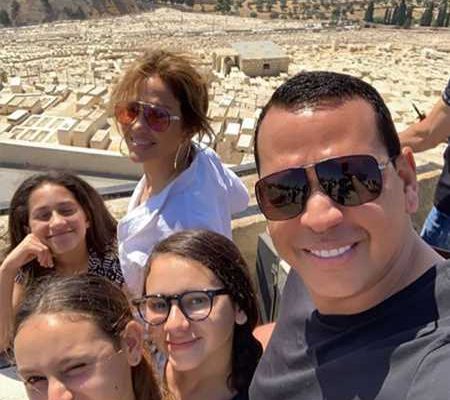 Jennifer Lopez and Alex Rodriguez spent some quality family time with their kids this week during their trip to Israel, where the singer traveled to as part of her “It’s My Party” world tour.

On Friday, the couple both shared several photos from their outing together, during which they got to take in some of the local sights and also enjoy a camel ride.

“Reconnecting with faith and family at the Via Dolorosa and the church of the holy sepulcher,” Lopez captioned a slideshow of images, including one of herself cuddling with son Max, 11, as they sat on a camel together.

Rodriguez, 44, also shared a family photo of himself smiling with his daughters Natasha, 14, and Ella, 11, as well as Lopez and her daughter Emme, also 11.

Earlier in the week, the retired Yankees star shared a post of just himself and his daughters, whom he shares with ex-wife Cynthia Rodriguez.

“What an amazing time we are having on my first trip to Israel! The people have been wonderful and have such energy. I will definitely be back and recommend visiting this incredible country!” he wrote alongside a photo of himself sandwiched between his two girls.

Since they began dating in February 2017, Lopez and Rodriguez have both been focused on blending their families.

“Our kids get along really well. We’re both from New York, we’re both Latin, we’re both in our 40s, we’re really enjoying life, but she really is one of the most impressive and smartest human beings I have ever met,” the athlete told Extra in June 2017.

“He’s a loving father,” Lopez later told Extra. “He’s a generous human being with his family, with his friends, with me. He’s caring and sweet and capable and responsible and just all the beautiful things you would want a man to be.”

Commenting on the similarities between her son and Rodriguez, earlier this week, Lopez shared a photo of the pair standing side-by-side in identical outfits while striking almost the same exact pose.

“These two…” Lopez captioned the shot, during which they both were leaning up against the wall, looking at their phones.

Last month, Rodriguez even enlisted all four kids to help surprise Lopez with a new Porsche, which retails for $146,000.

Max, Emme, Natasha, and Ella all later turned up at Lopez’s epic birthday bash and performed for their mom, the girls singing “It’s a Hard Knock Life” from Annie and Max doing his best rendition of “My Shot,” from Lin-Manuel Miranda’s Tony-winning musical, Hamilton.