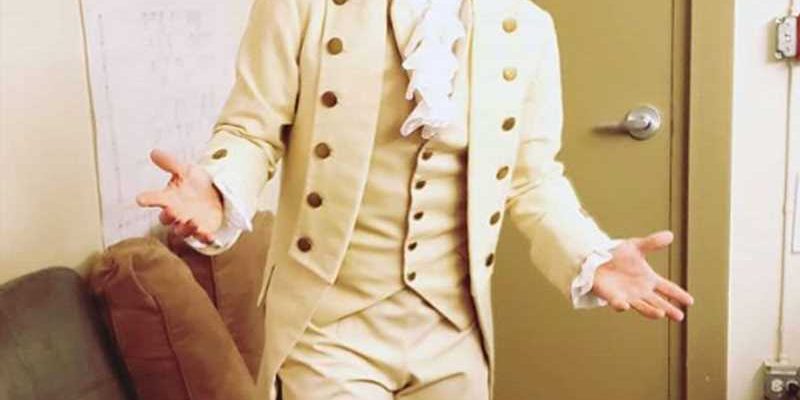 Miguel Cervantes is heading back to the stage.

Ten days after the death of his 3-year-old daughter Adelaide, the actor returned to his leading titular role in the Chicago production of Hamilton.

Miguel, 42, shared the bittersweet news on Instagram with a photo of himself in his Alexander Hamilton costume backstage and captioned the shot, “Lez go.”

The actor’s wife Kelly Cervantes also revealed that Miguel was returning to the stage in emotional posts on her Twitter and Instagram accounts, which both featured a snapshot of the Hamilton stage.

“The first time I saw @hamiltonmusical was September 2015 with Miguel by my side and the original Broadway company on the stage,” Kelly, 37, wrote on Instagram. “Adelaide was heavy in my stomach as I squished into the narrow seats at the Richard Rodgers Theater 8 months pregnant.”

“Tonight, I watch my husband retake the stage, life imitating art imitating life, and Adelaide is still with us but now resting heavy in our hearts,” she added. “I am so proud of you, @mig.cervantes. I’ll be standing by your side, taking this one inch stone at a time.”

Adelaide passed away on Oct. 12, just a few short days before her fourth birthday, and spent nearly her entire life battling seizures no one can still quite explain.

In a November 2018 interview with PEOPLE, Miguel and Kelly shared that Adelaide missed some traditional milestones as a baby, and when she was just 7 months old, she experienced her first seizure. Doctors would quickly determine that the seizure was a result of epilepsy. At 9 months old, Adelaide was diagnosed with Infantile Spasms (IS.)

“The Cervantes family is heartbroken to announce that their baby girl Adelaide Grace passed away early Saturday morning,” read a statement issued to PEOPLE last week.

“She was held in the loving arms of her family as she peacefully achieves the ‘calm’ for which they’ve been searching for so long,” the statement continued. “They would like to extend their deepest, heartfelt gratitude to all who have reached out with words of support and prayer and will continue to feel all the love as they go through this difficult time.”

That same day, Kelly shared a heartbreaking, black-and-white photo of her late daughter’s bedroom with her stuffed animals lined up neatly on her bed in a row.

“The machines are off,” she wrote alongside the picture. “Her bed is empty. The quiet is deafening. Miss Adelaide Grace left us early Saturday morning. She went peacefully in my arms and surrounded by love.”

“Finally, she is free from pain, reactions, and seizures but leaves our hearts shattered,” Kelly added. “We love you so much Adelaide bug and forever after.”

Following the difficult weekend, Miguel announced that his family, including the couple’s son Jackson, was “doing ok” as they prepared for Adelaide’s Celebration of Life service.

“Dear everyone,” Miguel wrote in a tweet. “Just wanted to let you know that Kelly, Jackson and I are doing ok. We are comforted knowing there are so many people sending positive vibes. We are seeing all of it and thanks. We will be celebrating her life and legacy soon.”

The service was held on Oct. 20, three days after Adelaide’s 4th birthday, at the Harold Washington Public Library in Chicago, where all of Adelaide’s loved ones gathered to remember the toddler.

In between several emotional musical performances, Miguel spoke to the crowd of people, which included 200 members of the general public who have been touched by Adelaide’s story, which was documented on Kelly’s popular Inchstones blog.

“To all of Adelaide’s army, to all who touched her and comforted her and tried to save her, you will always be a part of our family,” the Hamilton star said towards the end of the 40-minute Celebration of Life service, as his wife stood reassuringly by his side, stroking his back with every passing word. “Adelaide will live on in all of us.”

“I think she’s dancing and smiling right now,” he added through his tears.