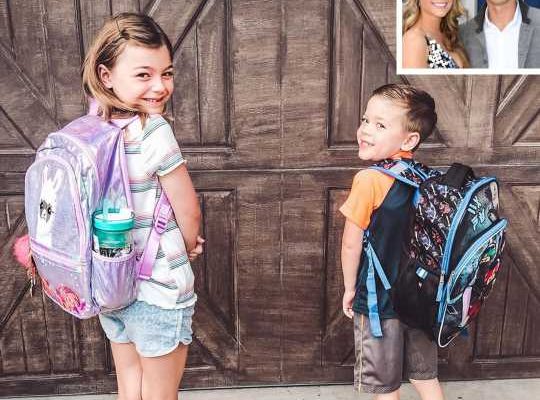 On Thursday, the wife of Granger Smith expressed her mixed feelings over sending the couple’s two older children — son Lincoln Monarch, 5, and daughter London, 7 — to kindergarten and second grade, respectively, just over two months after they lost their 3-year-old son River Kelly in a tragic drowning accident.

Amber revealed in the caption of a photo set featuring her kids proudly showing off their backpacks that she was feeling “the full gamut of emotions,” from pride over their new grade milestones to sadness because “they won’t have their little brother bouncing and running down the halls, making everyone laugh at drop off.”

“I would normally be going home with just River for another year before he started pre-k. I was so excited to have the one on one time with him while big bro and sis were at school,” she wrote. “He was already belting out his ‘ABCD’s’ and teaching me the difference between an excavator and front loader. But sometimes the plans we make for ourselves don’t come to pass.”

“Sometimes God has another path for you, your family, and your heart,” Amber went on. “This sucks and it will suck for the rest of my life, but I’m choosing to make the most out of the hand that we’ve been dealt.”

“I’m choosing to smile, through tears, and get excited for London and Linc because they need and deserve that,” she added. “I’m going to focus on living a life of meaning for River’s honor, creating the foundation in his name to help others, and getting closer to Jesus and my family & friends than I’ve ever been. Not today Satan.”

She ended her caption with an inspiring message of advice: “If you’re having a hard time, going through a ‘why god’ season, and your life isn’t what you planned it to be, ‘you CAN do it.’ You have a purpose. Your grief and joy can coexist. It’s not over yet. Just dig deep. Fight when you can and hit your knees when you can’t. Let’s all pray for our kiddos and our teachers and our schools. May God be by their side every step of the way. 🙏🏼 📚 ✏️”

River died in June as a result of a drowning accident at home. That same day, Smith, 39, shared the “unthinkable” news on Twitter and Instagram, revealing that “despite doctor’s best efforts, he was unable to be revived.” River was laid to rest on June 11.

Since they said goodbye to their youngest family member, Amber has been using social media to connect with other parents who have dealt with immense loss, as well as to express her gratitude for Lincoln and London.

“When you go through a season like we are, you think you may never laugh again,” she wrote alongside an Aug. 5 photo of the siblings soaking wet after playing in the rain, while a second showed Amber smiling along with them.

“I thank the good Lord for these 2. Dancing through the storm (literally),” she continued. “Making each other, and their mama, laugh. 🙏🏼✝️🌧 Riv would have been the first one out here jumping in puddles. 🎈”

In late July, Amber shared two photos with Lincoln and London, in which she quoted a passage from the book Bronner by Sherri Burgess before adding, “After dinner drive and walk to the lake.”

“The smiles on these faces are some of the brightest lights in the dark. ❤️,” she raved of her children.