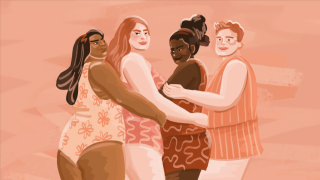 Welcome to the Learning Curve, where we unpack the complicated experience of trying to accept your own body in a world that doesn't seem to want you to. This month, staff editor Nicola Dall’Asen discusses the emerging body neutrality movement — and why it isn't a perfect practice for everyone.

When I first discovered body positivity in the early 2010s, I thought it was the most magical thing to ever exist. At that time, I'd never been told that my body was not only valid but beautiful, so I dove headfirst into body positivity's self-loving community of influencers, started by and for fat Black and brown women who aimed to represent and educate. But these days the term makes my gut twist. Somewhere along the way, the body positivity movement's intention of fat liberation got diluted by commercialization, oversaturation on social media, and, let's face it, a lot of thin folks attempting to soothe their fears of becoming fat (that's another discussion for another day).

Depending on whom you ask, "body positivity" can be a rather controversial term, one I now refuse to use. (You might've picked up on how I've never called Learning Curve "a body-positive column.") Due to advertisements that boast of body positivity's merits but are centered on smaller, hourglass-proportions of plus-sizes (think size 14-18) — or, often, those that aren't plus-size at all — plenty of people have understandably detached themselves from the idea of body positivity. And plenty of those people are now turning to the ever-expanding body neutrality movement, which began picking up steam in 2015; intuitive-eating counselor Anne Poirier is largely credited for popularizing it with a body neutrality workshop that she created.

Body neutrality is like body positivity's wise, older aunt. The goal is still to change the way we think about the way we look, but rather than foster adoration for one's body, body neutrality says one should aim to merely accept it for what it is and focus more on the mental and emotional aspects of identity, such as compassion, a sense of humor, creativity. According to body neutrality, bodies are primarily vessels for organs and not an important part of a person's overall character. You've probably seen a few educational memes about the differences between body positivity and neutrality, like this one from Beyond Beautiful, which perfectly summarizes the basics.

It seems like every day I see a new TikTok or Instagram influencer's post or an op-ed telling me that body neutrality is the solution to all of body positivity's toxic faults and that I should start practicing it, like, yesterday. But if I'm being brutally honest? I'm okay, thanks.

To be clear: I do not think body neutrality is a bad thing. Quite the opposite. I follow and agree with a lot of its core practices and beliefs, such as using mindfulness to decide when to eat and exercise and the general idea that physical beauty is not an indicator of worth. For many people, maintaining unwavering body positivity is not a realistic goal and can inadvertently cause feelings of failure, so I understand why so many are finding inner peace with the body neutrality movement — and I think that's amazing.

"When I see body-neutral TikToks or articles, I wonder if I've been doing this whole body-acceptance thing the wrong way all this time. But in reality there is no secret formula for success with this stuff."

But every time I'm about to dip my toe in the body neutrality water, I hesitate because, while I can acknowledge that my body's appearance isn't and shouldn't be the most important aspect of my being, I also can't deny that how my body looks has always affected my thoughts, feelings, personality, sexuality — all of it.

Learning to appreciate my body as it is and helping other people in my life do the same has, more or less, been the overarching plotline of my 27 years on Earth. In a perfect world, my body wouldn't have caused as much drama as it did — body-shaming by schoolmates, an inability to find clothes that fit, family fights spurred by passive-aggressive comments about my size — but I wouldn't be the same person if none of that drama had happened…or if I had just been thin to begin with. Would I like who I am if I didn't have the same overwhelmingly tall stature, thunder thighs, and pooch-y belly? I don't know, because overcoming all that body shame is part of what's made me headstrong, confident, and resilient — and I love those things about myself. Wouldn't change 'em if I could.

I'm not saying you have to endure trauma to become a strong person, or that trauma is somehow good for you at the end of the day (take it from someone who knows firsthand, it's not); but when it comes to my life, I can't deny my body's role in the process. I can — and want to — accept and love my body for how it looks and what it can do while simultaneously appreciating my inner characteristics. To me, they're one and the same.

But that's definitely not the case for everyone, and that's okay because every person's journey with self-image is unique. My journey is laced with privilege: I'm one of those white, cisgender, able-bodied, size-14 people who is heralded by commercialized body positivity. It's important to me to point this out in any conversation I have about body image because, let's be honest, I have it relatively easy. (And so do lots of folks the fat-activism community calls "small fats," who exist on the lowest end of the spectrum we use to identify different levels of body privilege among plus-size folks.)

"I don't need to use anyone's approach to body acceptance but my own because I am unique."

What I'm getting at is that, as much as overflowing sound-bytes and affirmations on the internet might try to sway everyone in whatever direction is popular at the moment, I think everyone's approach to body acceptance and self-acceptance should be different. When I see those body- neutral TikToks or articles, I wonder if I've been doing this whole body-acceptance thing the wrong way all this time. But in reality there is no secret formula for success with this stuff. Ultimately, I believe the main thing that matters is that we prioritize the fat liberation at the core of these movements and express gratitude for any systemic body privileges we do have. As I've said a million times, being fat isn't a bad thing; underrepresentation of and discrimination against fat people are why we need these conversations in the first place, and (societally speaking) to shift our perspective from "but all bodies are beautiful" to "systemic fatphobia must be stopped."

I guess this is me writing to remind myself that I don't have to choose a specific movement and follow it blindly. I can cherry-pick beliefs and practices that make me feel good while continuing to educate myself with books, podcasts, and other materials created by fat folks who have different experiences than mine. My outlook might not have a catchy name that can be hashtagged endlessly, but that's kind of the point: I don't need to use anyone's approach to body acceptance but my own because I am unique. Maybe you don't need to either — but that can only be up to you.