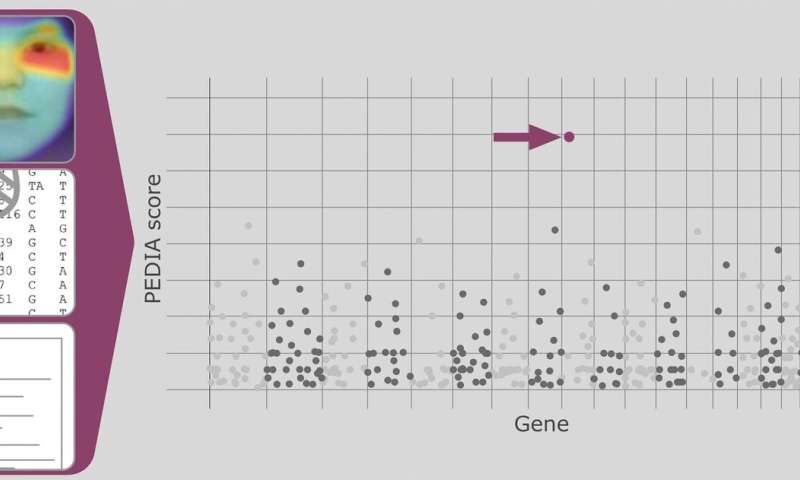 Every year, around a half-million children worldwide are born with a rare hereditary disease. Obtaining a definitive diagnosis can be difficult and time consuming. In a study of 679 patients with 105 rare diseases, scientists from the University of Bonn and the Charité-Universitätsmedizin Berlin have shown that artificial intelligence can diagnose rare diseases more efficiently and reliably. Now, researchers are testing a neural network that automatically combines portrait photos with genetic and patient data. The results are published in the journal Genetics in Medicine.

Many patients with rare diseases go through lengthy clinical exams until they are correctly diagnosed. “This results in a loss of valuable time that is actually needed for early therapy in order to avert progressive damage,” explains Prof. Dr. med. Dipl. Phys. Peter Krawitz from the Institute for Genomic Statistics and Bioinformatics at the University Hospital Bonn (UKB). Together with an international team of researchers, he has demonstrated how artificial intelligence can be used to make comparatively quick and reliable diagnoses in facial analysis.

The researchers used data of 679 patients with 105 different diseases caused by the change in a single gene. These include, for example, mucopolysaccharidosis (MPS), which leads to bone deformation, learning difficulties and stunted growth. Mabry syndrome also results in intellectual disability. All these diseases have in common that the facial features of those affected show abnormalities. This is particularly characteristic, for example, of Kabuki syndrome, in which facial features are reminiscent of the make-up of a traditional Japanese form of theatre. The eyebrows are arched, the eye-distance is wide and the spaces between the eyelids are long.

The used software can automatically detect these characteristic features from a photo. Together with the clinical symptoms of the patients and genetic data, it is possible to calculate with high accuracy which disease is most likely to be involved. The AI and digital health company FDNA has developed the neural network DeepGestalt, which the researchers use as a tool of artificial intelligence for their study. “PEDIA is a unique example of next-generation phenotyping technologies,” said Dekel Gelbman, CEO of FDNA. “Integrating an advanced AI and facial analysis framework such as DeepGestalt into the variant analysis workflow will result in a new paradigm for superior genetic testing.”

The scientists trained this computer program with around 30,000 portrait pictures of people affected by rare syndromal diseases. “In combination with facial analysis, it is possible to filter out the decisive genetic factors and prioritize genes,” says Krawitz. “Merging data in the neuronal network reduces data analysis time and leads to a higher rate of diagnosis.”

The head of the Institute of Genomic Statistics and Bioinformatics at the UKB has been working with FDNA for some time. “This is of great scientific interest to us and also enables us to find a cause in some unsolved cases,” said Krawitz. Many patients are currently still looking for an explanation for their symptoms.

The study is a team effort between computer science and medicine. This can also be seen in the shared first authorship of the computer scientist Tzung-Chien Hsieh, doctoral student at the institute of Professor Krawitz, and Dr. Martin Atta Mensah, physician at the Institute of Medical Genetics and Human Genetics of the Charité and Fellow of the Clinician Scientist Program of the Charité and Berlin Institute of Health (BIH). Prof. Dr. Stefan Mundlos, Director of the Institute of Medical Genetics and Human Genetics at the Charité, also participated in the study, as did over 90 other scientists.