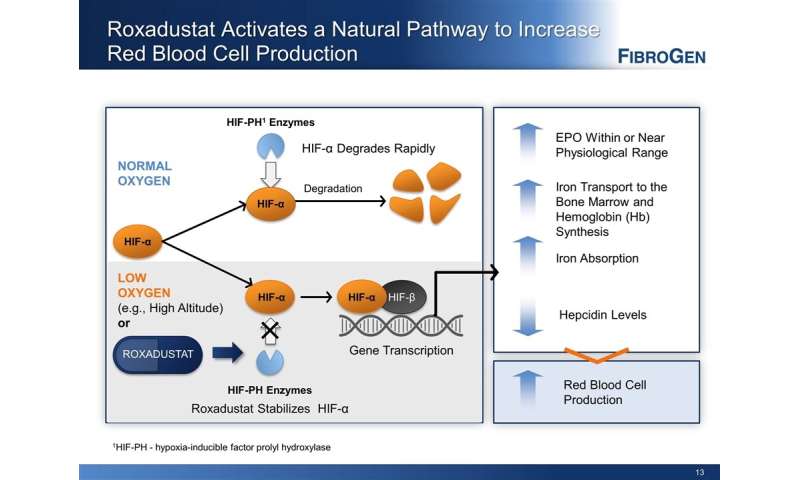 FibroGen, Inc. today announced publication of results from the Phase 3 trial of the efficacy and safety of roxadustat treatment compared to placebo for anemia in non-dialysis patients (NDD) with chronic kidney disease (CKD) in the People’s Republic of China (China) in the New England Journal of Medicine (NEJM). In this study, roxadustat met its primary efficacy endpoint for anemia correction by achieving a statistically significant increase in mean hemoglobin level from baseline to hemoglobin level averaged over weeks seven through 9. The efficacy of roxadustat in hemoglobin correction and maintenance was maintained during the open-label period of weeks nine through 26.

“In China, there is a growing advanced stage CKD population. Anemia management, especially in those patients not receiving dialysis, has been challenging as the current injectable therapies require frequent administration at medical facilities, leaving a significant proportion of patients untreated. This orally available medicine, roxadustat, the first-in-class HIF-PHI, has the potential to address this medical need,” said Professor Nan Chen, Department of Nephrology, Institute of Nephrology, Ruijin Hospital, Shanghai Jiao Tong University School of Medicine, Shanghai.

“An accessible anemia therapy like roxadustat is much needed for anemic CKD patients in both urban and countryside areas. We look forward to the addition of the treatment of anemia in non-dialysis dependent CKD patients to the roxadustat label,” said Professor Chuanming Hao, M.D., Ph.D., Division of Nephrology, Huashan Hospital Fudan University, Shanghai.

Anemia in CKD is associated with cardiovascular disease, hospitalization, cognitive impairment, and reduced quality of life, and has been shown consistently to be associated with an increased risk of mortality.

The trial (FGCL-4592-808) featured an eight-week double-blind placebo-controlled initial treatment period in which roxadustat was compared to placebo in non-dialysis dependent CKD patients with anemia in China. Following this initial period, all patients continuing the study received roxadustat for an 1eight-week open-label treatment period. Notably, parenteral iron was restricted in these patients except as a rescue therapy. The primary endpoint was the average change in hemoglobin from baseline to week seven through nine.

For the initial double-blind period, 154 patients were randomized to roxadustat (n=102) and placebo (n=52), respectively.

Categories
Recent Posts
We and our partners use cookies on this site to improve our service, perform analytics, personalize advertising, measure advertising performance, and remember website preferences.Ok