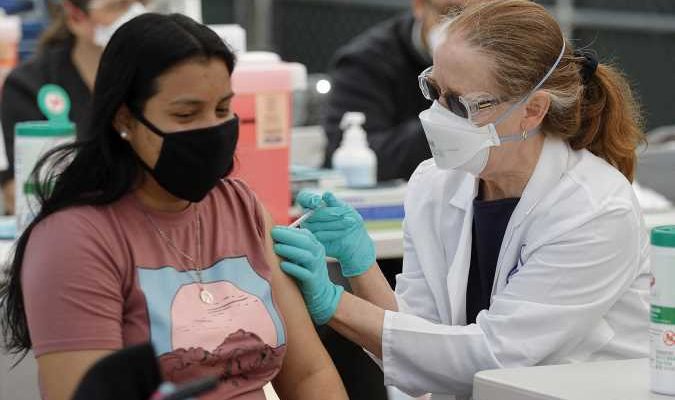 Community clinics in California say they haven’t been paid for at least 1 million covid-19 vaccine doses given since January, creating a “massive cash flow problem” for some and complicating efforts to retain staff. Clinics in other states, including Michigan and Mississippi, are also awaiting payment.

The delays stem from the distinct way federally qualified health centers are reimbursed for care under Medicaid, the joint federal-state program providing health coverage for low-income people. Some centers are not even billing for the shots because they say it’s too complicated.

Clinics are owed tens of millions of dollars, at minimum, for shots they’ve given since the vaccines received emergency authorization.

Of the roughly 70,000 doses administered by La Clínica de la Raza, an organization with more than 30 Bay Area locations, almost none of those costs have been reimbursed, chief financial officer Susan Moore said. And the clinics don’t expect to receive reimbursement for around half of those shots because they were administered to the community without collecting insurance information. The extra staff time and supplies were covered with grant money.

“We were monitoring our cash very closely,” Moore said. “Early in the pandemic I was very concerned, but by the time the vaccine came out, it was clear to me that we were going to have enough cash in the short term.”

The Biden administration has relied on the clinics to boost vaccination rates among racial and ethnic minorities and people living in poverty. Health centers have administered nearly 15 million vaccine doses, federal data shows, although it is unclear how many of those were given during a patient visit.

Under federal law, the government pays health centers a set rate for patient visits, each potentially costing hundreds of dollars. Many state Medicaid agencies have said that if a patient receives a covid shot along with other care, the clinic’s cost to give the vaccine is covered as part of its normal payment rate.

Troubles getting paid occur when the covid vaccination is the only service provided, officials say, such as during a mass immunization clinic.

Some states have told health centers they can bill Medicaid separately for each dose administered in that situation, such as at the Medicare payment level of approximately $40 per shot. But others, like Michigan and California, have endured a months-long process with the Centers for Medicare & Medicaid Services to devise a payment formula for how much it costs a clinic to give a shot.

CMS said it is reviewing proposals from 13 states to pay clinics for the vaccinations. “We are continuing to work with states on their proposals,” a CMS spokesperson said. If they are approved, the clinics would be paid retroactively.

Michigan has been working with CMS to figure out reimbursement “when those vaccines are administered as a stand-alone service,” said Bob Wheaton, spokesperson for the state’s health department. Bergquist said the calculated cost in Michigan was just shy of $40 a dose.

California devised a plan that “meets federal requirements that reimbursement to these clinics be based on cost to provide services,” said Carol Sloan, spokesperson for the California Department of Health Care Services.

California’s average cost to provide each dose is about $67, based on data clinics provided.

Because of the short shelf life of an open vial of vaccine, health centers opted for dedicated vaccination clinics instead of individual appointments, to avoid wasting doses, said Andie Martinez Patterson, a senior vice president at the California Primary Care Association, which lobbies for the state’s health centers.

Lack of payment is “untenable given these providers’ financial restraints and tremendous outlay of resources during this historic pandemic response,” Barbara Ferrer, director of the Los Angeles County Department of Public Health, wrote in a Sept. 22 letter to CMS Administrator Chiquita Brooks-LaSure. In interviews, clinics cited high expenses related to vaccination, including running community-based clinics and targeted social media campaigns.

“There’s a tremendous amount of misinformation and disinformation out there,” said Jim Mangia, CEO of the St. John’s Well Child & Family Center in Los Angeles, which opened 26 vaccination sites and operates three mobile units. “You kind of have to do double the work to counter it.”

Angel Greer, CEO of Coastal Family Health Center on Mississippi’s Gulf Coast, said not receiving payment to help cover the clinic’s staffing costs is detrimental. More than 50% of the health center’s patients are uninsured — and 14% each are on Medicare or Medicaid. The federal Health Resources and Services Administration separately reimburses clinics for vaccines administered to uninsured people.

In Mississippi, state officials initially proposed a plan that would have reimbursed health centers at the Medicare rate for stand-alone vaccinations. CMS has not approved it.

“I’m sure, across the nation is no different than Mississippi in our struggles to maintain adequate workforce. It’s extremely difficult to be competitive with these workforce constraints when we’re not being reimbursed for these services,” Greer said. The health center administered 1,000 covid vaccine doses in September, with the “overwhelming majority” occurring outside a regular medical visit, Greer said.

In winter 2020, it became clear California clinics were going to have to eat the costs of vaccination for a while, Martinez Patterson said. They were “hoping on a prayer that most of their costs would be reimbursed” but went ahead and vaccinated patients anyway.

“I’m fairly confident that we will eventually get paid, but this is one of the downsides to being a community health center,” McFarland said, a sentiment others expressed. The clinic is still giving shots, and he thinks the money will come eventually. “It’s just a timing issue, I guess.”

Health centers are pulling from different pots to stay afloat: The American Rescue Plan Act provided $7.6 billion to clinics to support covid vaccination, testing and treatment. Clinics relied on small-business loans from the Paycheck Protection Program, as well as state money, for vaccination efforts. “I do think because of the federal relief, there is not a fire,” Martinez Patterson said.

Health centers in other states echoed that.

“We do not have an issue with reimbursement,” said Dr. Andrea Caracostis, CEO of the Hope Clinic in Houston. She noted that the federal government paid for vaccines and that some health centers’ payment rates cover vaccines.

“We don’t view this small subset, nor the data provided, as sufficiently representative” to accurately estimate the extent of unpaid vaccination claims, Sloan said.

Health centers in California have administered 4.8 million doses, according to federal data.

“We’re just whittling away at it,” said Mangia, of St. John’s.

St. John’s anticipates getting reimbursed for doses under Medicaid in November or December, the clinic said through a spokesperson.

“We know they’re good for it. We know it’s coming,” Louise McCarthy, CEO of the Community Clinic Association of Los Angeles County, said of the Medicaid payments. “But it’s really hard to hire people when you don’t have cash flow.”