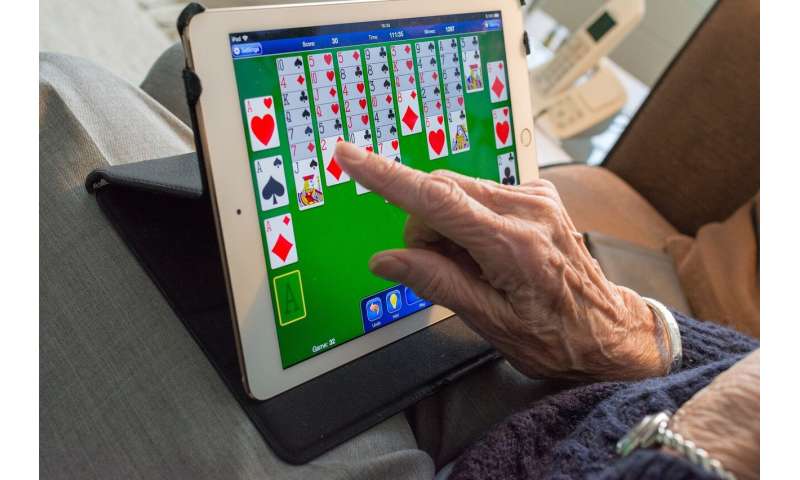 Dementia, including Alzheimer’s disease, often afflicts patients with negative moods: confusion, anger, sadness or apathy. Negative emotions also affect caregivers, who are often family members with little formal training to cope with the stress of caring for a loved one.

Patients with dementia may be prescribed antidepressants or other drugs in an effort to help lift their mood. But side effects can be severe, so clinicians and researchers continue to seek out other methods to improve the quality of life for Alzheimer’s patients and those who care for them.

A pilot study analyzed by researchers at the University of Wisconsin–Madison School of Pharmacy finds that dementia patients given access to tablets loaded with apps for photos and music, and common apps such as YouTube, experience more positive moods. Half of the patients involved in the study saw improvements in their moods.

Caregivers were able to personalize how dementia patients interacted with the tablets and they, too, benefited, especially when they felt the tablet sessions made their loved ones feel better.

This preliminary study is one of the first in the U.S. to assess how simple interactions with tablets could benefit those with dementia and their caregivers. But plenty remains unknown, such as what components of the tablets were most effective and how long any benefits may last.

The study was led by Jay Ford, a professor in the pharmacy school’s social sciences division, along with his colleagues Aaron Gilson and Arveen Kaur. They partnered with Generation Connect, a company that develops mobile software for use in home care. The results are published today (Sept. 3, 2019) in the journal JMIR Formative Research.

During 2017 and 2018, Generation Connect staff trained caregivers to develop personalized tablet sessions and asked them to rate their care recipients’ moods before and after using the tablet over more than 1,000 sessions. The interventions were designed to benefit patients with dementia, but the study subjects were not limited to those primarily suffering from memory loss. Others had movement or communication disorders, for example.

Interventions were conducted primarily in skilled nursing facilities or in caregivers’ or patients’ private homes. The UW–Madison researchers analyzed the data provided to them by Generation Connect.

The vast majority of care recipients ended the sessions in a positive mood. Music and YouTube were the apps most strongly associated with improving or maintaining positive moods. Combining multiple strategies—for example, playing some music followed by looking at family photos—was also associated with positive moods, but playing games alone was not.

“One of the things the tablet allows you to do is to bring all those non-pharmacological approaches together so they can be offered through one device,” says Ford. “It provides the ability to tailor the intervention to the person with dementia.”

Patients living in skilled nursing facilities saw the greatest improvements in their moods as a result of the tablet interventions. This is largely because these patients were twice as likely to be in negative moods before using the tablets compared to patients in home care.

The researchers also surveyed a subset of caregivers who generally reported that the tablet sessions improved their caregiver days. This effect was strongest when caregivers perceived the sessions lifted the moods of their care recipients.

In all, the tablets seemed to provide a simple way for caregivers to tailor pleasant experiences to the needs and desires of those in their care. The researchers say it may be the easy personalization above all that is the most effective part of the tablet intervention.

“What’s nice is it’s a real-time experience, so if one interaction doesn’t work you can try another app. You can move from music to reminiscing. You can find at that point and time the interventions to which that person responds,” says Gilson.

As this was a preliminary study, there was not a control group that participated in non-tablet interventions. And to minimize the burden on caregivers, only moods were reported, not other data like the duration of the session. Nor were patients tracked over time to see if extended use of the tablets improved their average mood.