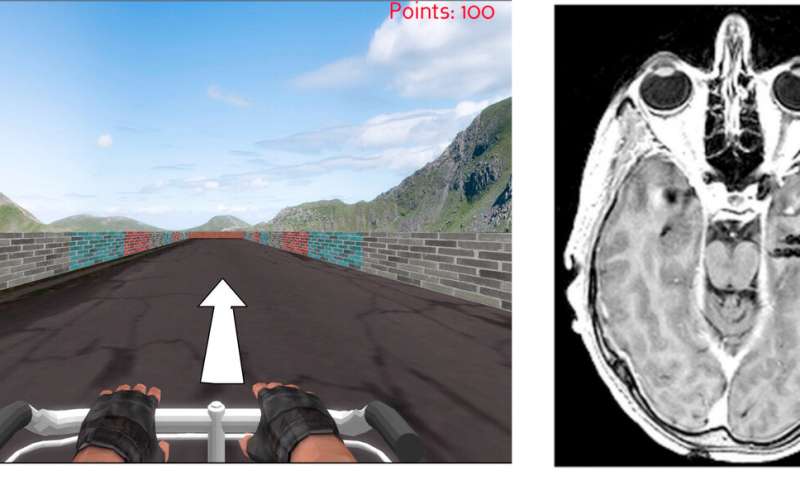 An important aspect of human memory is our ability to conjure specific moments from the vast array of experiences that have occurred in any given setting. For example, if asked to recommend a tourist itinerary for a city you have visited many times, your brain somehow enables you to selectively recall and distinguish specific memories from your different trips to provide an answer.

Studies have shown that declarative memory—the kind of memory you can consciously recall like your home address or your mother’s name—relies on healthy medial temporal lobe structures in the brain, including the hippocampus and entorhinal cortex (EC). These regions are also important for spatial cognition, demonstrated by the Nobel-Prize-winning discovery of “place cells” and “grid cells” in these regions—neurons that activate to represent specific locations in the environment during navigation (akin to a GPS). However, it has not been clear if or how this “spatial map” in the brain relates to a person’s memory of events at those locations, and how neuronal activity in these regions enables us to target a particular memory for retrieval among related experiences.

A team led by neuroengineers at Columbia Engineering has found the first evidence that individual neurons in the human brain target specific memories during recall. They studied recordings in neurosurgical patients who had electrodes implanted in their brains and examined how the patients’ brain signals corresponded to their behavior while performing a virtual-reality (VR) object-location memory task. The researchers identified “memory-trace cells” whose activity was spatially tuned to the location where subjects remembered encountering specific objects. The study is published today in Nature Neuroscience.

“We found these memory-trace neurons primarily in the entorhinal cortex (EC), which is one of the first regions of the brain affected by the onset of Alzheimer ‘s disease,” says Joshua Jacobs, associate professor of biomedical engineering, who directed the study. “Because the activity of these neurons is closely related to what a person is trying to remember, it is possible that their activity is disrupted by diseases like Alzheimer’s, leading to memory deficits. Our findings should open up new lines of investigation into how neural activity in the entorhinal cortex and medial temporal lobe helps us target past events for recall, and more generally how space and memory overlap in the brain.”

The team was able to measure the activity of single neurons by taking advantage of a rare opportunity: invasively recording from the brains of 19 neurosurgical patients at several hospitals, including the Columbia University Irving Medical Center. The patients had drug-resistant epilepsy and so had already had recording electrodes implanted in their brains for their clinical treatment. The researchers designed experiments as engaging and immersive VR computer games and the bedridden patients used laptops and handheld controllers to move through virtual environments. In performing the task, subjects first navigated through the environment to learn the locations of four unique objects. Then the researchers removed the objects and asked patients to move through the environment and mark the location of one specific object on each trial.

The team measured the activity of neurons as the patients moved through the environment and marked their memory targets. Initially, they identified purely spatially tuned neurons similar to “place cells” that always activated when patients moved through specific locations, regardless of the subjects’ memory target. “These neurons seemed only to care about the person’s spatial location, like a pure GPS,” says Salman E. Qasim, Jacobs’ Ph.D. student and lead author of the study. 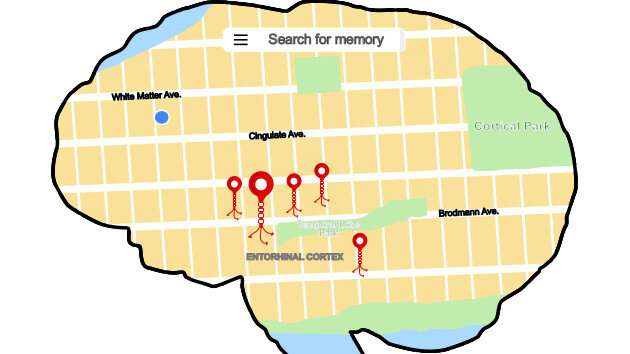 But the researchers also noticed that other neurons only activated in locations relevant to the memory the patient was recalling on that trial—whenever patients were instructed to target a different memory for recall, these neurons changed their activity to match the new target’s remembered location. What especially excited Jacobs and Qasim is that they could actually decode the specific memory a patient was targeting based on the activity of these neurons.

“Our study demonstrates that neurons in the human brain track the experiences we are willfully recalling, and can change their activity patterns to differentiate between memories. They’re just like the pins on your Google map that mark the locations you remember for important events,” Qasim says. “This discovery might provide a potential mechanism for our ability to selectively call upon different experiences from the past and highlights how these memories may influence our brain’s spatial map.”