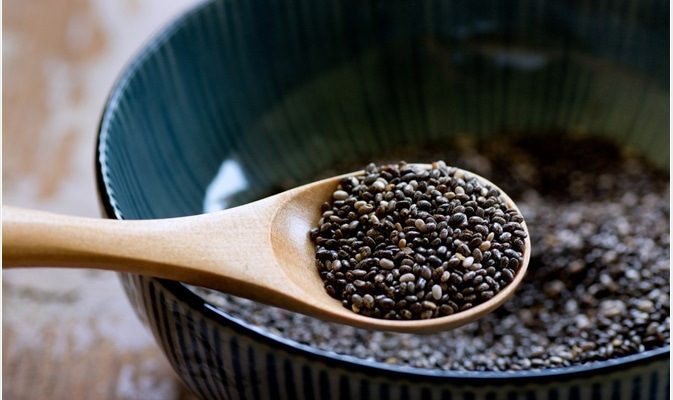 An increased interest in maintaining a healthy lifestyle has prompted recent studies on the health benefits of novel functional foods such as chia seeds, acai berries, and apple cider vinegar, all of which have significant nutritional and disease prevention characteristics. Chia seeds, in particular, are often referred to as a “superfood” or functional food. 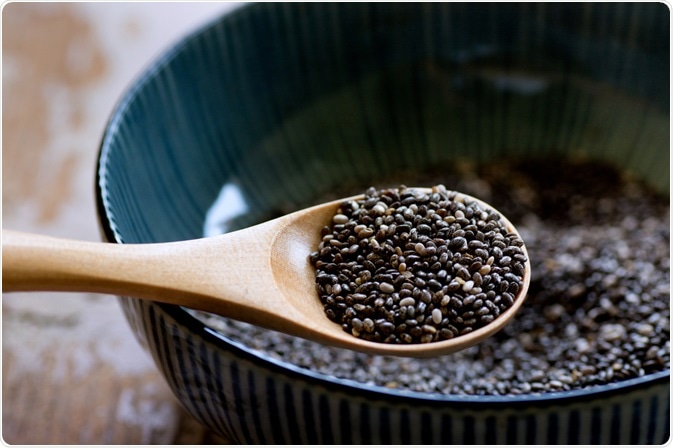 What are chia seeds?

Research interests in chia seeds were prompted by their high content of ω-3 fatty acids, with a potential role in reducing the risks of chronic diseases such as diabetes, cardiovascular disorders, nervous system diseases, and inflammatory diseases. Chia belongs to the Lamiaceae family of oleaginous plants, which originates from Southern and Central America.

Chia seeds are increasingly popular as a gluten-free alternative, and the grain is widely available as whole seed, oil, and flour. Additionally, chia seeds are often incorporated into various food products such as multigrain bread, cereals, and nutrition bars as a result of their nutritional properties.

In terms of their macronutrient content, chia seeds contain carbohydrates (42.12 g/100 g), fat (30.74 g/100 g), dietary fiber (34.4 g/100 g), and protein (16.54/100 g). These seeds also contain antioxidants in significantly higher quantities than many other crops and are high in phenolic compounds, which are known for their antioxidant content.

Dietary fiber is comprised of several compounds which include plant carbohydrate polymers, oligosaccharides, and polysaccharides like hemicellulose, pectin substances, and cellulose, all of which may be associated with non-carbohydrate components and lignin. These include waxes, saponins, and phyayes.

Total daily fiber intake is an important component of the diet. Some of the health benefits associated with fiber include a reduction in cholesterolemia, modification of both insulin and glycaemic responses, improved gastrointestinal transit, and antioxidant activity. Fiber also performs a fat-binding function that enables gel-formation, which is known to contribute to satiation. Fiber is also associated with a chelating effect that serves to chelate ions.

Read about the importance of dietary fiber.

The high NSSDF content of chia seeds contributes to the ability of these seeds to lower cholesterol and slow the transit of food in the gut, which can regulate blood sugar following a meal. Chia seeds maintain this property at low water concentrations, during which gel capsule forms around the seed upon contact with water.

Antioxidant compounds reduce the risk of chronic diseases like cancer and cardiovascular diseases. These compounds also offer protection against other disorders such as diabetes and Alzheimer’s and Parkinson’s disease.

Caffeic and chlorogenic acids are the dominant antioxidants, which are known to inhibit lipid peroxidation. These compounds are significantly stronger antioxidants as compared to vitamins C and E.

PUFAs, such as ALA, are important for human nutrition but should be provided as food since they cannot be naturally synthesized by the human body. In chia seeds, 60% of the oil is derived from w-3 fatty acids.  ω-3 fatty acids can block calcium and sodium channel dysfunctions, which can cause hypertension, as well as improve heart rate variability and protect ventricular arrhythmia.

Previous studies have found that when chia seeds are used as flour for the production of bread, a better lipid profile arises in the baked product as a result of the higher w-3 fatty acid content and a better w-6: w-3 ratio. w-3 acids can reduce cholesterol levels, regulate heart rhythms and blood pressure, minimize the risk of blood clots, and decrease systemic inflammation. 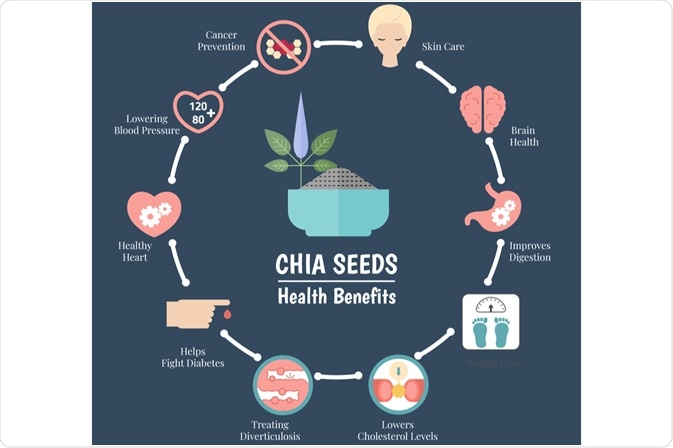 Glutamic acid is associated with stimulating the central nervous system and athletic endurance. Aspartic acid also contributes to proper nervous system function and the regulation of hormones. Comparably, sulfur-containing amino acids are implicated in the function of tertiary and quaternary structures of proteins. Moreover, chia seeds are also a potential source of bioactive peptides, which can act as protecting agents against oxidative processes.

w-3 and w-6 fatty acids in chia oil lend themselves to skin applications because they can inhibit melanin hyperpigmentation. More specifically, these fatty acids can down-regulate the expression of melanogenesis-related genes that encode key melanogenic proteins. These phenolic compounds also possess antioxidant properties that can mitigate the effect of oxidants that promote cell damage.

Chia seeds also possess cardioprotective effects. For example, w-3 fatty acids can improve heart health, as indicated by previous studies demonstrating that the increased uptake of ALA can decrease the risk of mortality from heart failure.

Another investigation revealed that the key benefits of chia seeds on the cardiovascular system include a good source of w -3 fatty acids, higher fiber, and iron content, as well as better calcium and magnesium profiles as compared to milk. This study also demonstrated the ability of chia seeds to stabilize blood glucose levels in diabetic patients, prevent myocardial infarction and strokes by inhibiting platelet aggregation, and reduce blood pressure.

In summary, chia seeds are an ancient grain whose growing popularity worldwide is driven by its nutritional profile that offers a wealth of functional benefits. In particular, ALA places chia seeds as an excellent source of w-3 fatty acids, which have been associated with many positive physiological functions in human beings.

In addition, chia seeds are a good source of antioxidants that have cardiac, hepatic protective effects, anti-aging, and anti-carcinogenic properties. Chia seeds are also a great source of dietary fiber, which is beneficial for the digestive system and plays a role in the control of the development of diabetes.

On a macromolecular level, chia seeds contain unsaturated fatty acids, gluten-free protein, vitamins, minerals, and phenolic compounds, all of which are essential components of a healthy balanced diet. On a systemic level, chia seeds can have a therapeutic role in diabetes, dyslipidemia, and hypertension, in addition to having an important role in anti-inflammatory and anti-oxidative processes Chia seeds have also been reported to provide antidepressant and analgesic properties, as well as potential supporting roles in vision and immune processes.

Hidaya is a science communications enthusiast who has recently graduated and is embarking on a career in the science and medical copywriting. She has a B.Sc. in Biochemistry from The University of Manchester. She is passionate about writing and is particularly interested in microbiology, immunology, and biochemistry.