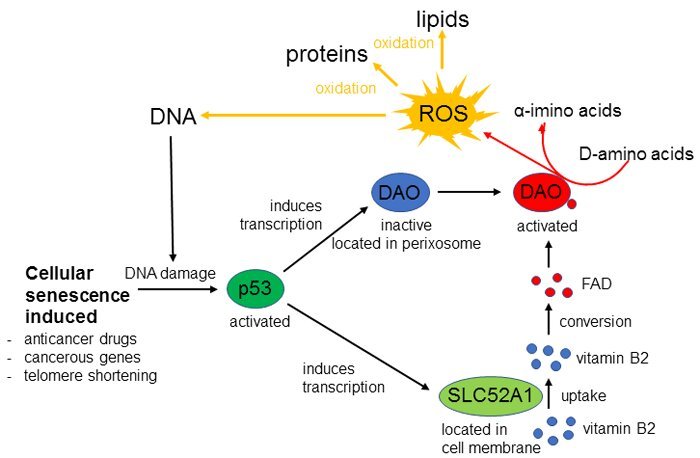 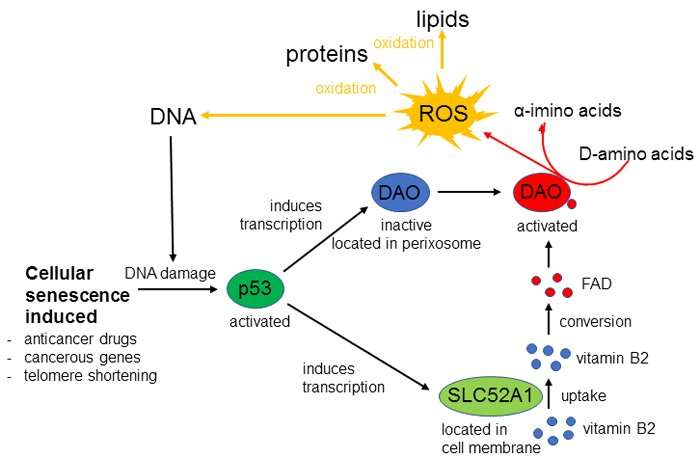 Permanently arrested cell growth is known as “cellular senescence”, and the accumulation of senescent cells may be one cause of aging in our bodies. Japanese researchers have discovered that a certain enzyme in our bodies promotes cellular senescence by producing reactive oxygen species. Drugs that target this enzyme could potentially suppress this process, and inhibit aging and aging-related illnesses.

This discovery was made by a Kobe University research team led by Professor Shinji Kamada and Research Fellow Taiki Nagano. The findings were published on January 18 in Life Science Alliance, a new open access journal created by a partnership between EMBO Press, Rockefeller University Press and Cold Spring Harbor Laboratory Press.

Staying healthy in old age is a pressing issue, particularly in “super-aging” societies such as Japan. The relationship between aging and cellular senescence is still not clear, but experiments using mouse models have found that removing senescent cells inhibits aging and aging-related illnesses.

Discovered about 80 years ago, D-amino acid oxidase (DAO) is an enzyme that catalyzes the oxidative deamination of D-amino acids. The research team induced cellular senescence by treating cancerous cells with low concentrations of anticancer drugs and causing DNA double-strand breaks. They discovered that the increased expression of DAO is dependent on a transcription factor known as p53, which has cancer-suppressing properties. Increased expression of DAO was confirmed in senescent cells induced by various methods, proving that DAO plays an important role in regulating cell senescence.

DAO oxidizes D-amino acids to produce α-imino acids, also producing reactive oxygen species (ROS) as a by-product. The accumulation of ROS has been linked both to aging and cellular senescence, so the team looked at the relationship between DAO and ROS in causing cellular senescence.

The activation of cellular senescence by DAO was only observed when anticancer drugs induced a DNA double-strand break. The team predicted that a gene induced by DNA damage is contributing to this process. They found that when DNA is damaged by shortening of telomeres, treatment by anticancer drugs or the activation of cancer genes, transcription is induced in DAO and p53-regulated genes including the transporter SLC52A1. DAO is localized within the cell peroxisome, but its activity is low because there are insufficient amounts of co-enzyme flavin adenine dinucleotide (FAD). SLC52A1 brings in vitamin B2 from outside the cell, this is converted to FAD in the cell, and when FAD concentration increases DAO is activated. ROS, the by-product of the reaction, damage cells by oxidizing DNA, proteins and lipids, which promotes cellular senescence (figure 1).