A new study from Washington University School of Medicine in St. Louis supports evidence that children with mild asthma can effectively manage the condition by using their two inhalers — one a steroid and the other a bronchodilator — when symptoms occur. This is in contrast to the traditional method of using the steroid daily, regardless of symptoms, and the bronchodilator when symptoms occur. The as-needed use of both inhalers is just as effective for mild asthma as the traditional protocol, according to the investigators.

The steroid inhaler lowers inflammation, and the bronchodilator — also known as a rescue inhaler — relaxes the airway during an asthma attack to quickly make breathing easier.

The research focused on African American children, who are disproportionately affected by asthma. The study appears in The Journal of Allergy and Clinical Immunology: In Practice. 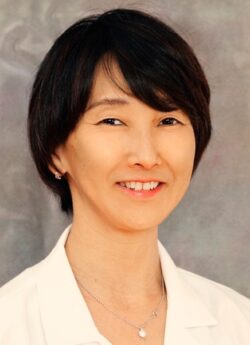 “We were pleased to find that as-needed treatment based on symptoms can deliver similar asthma control with less medication,” said first author Kaharu Sumino, MD, an associate professor of medicine. “Patients in the group that used both inhalers as needed used about one-fourth the steroid dose of the group that inhaled a prescribed daily amount. We also were pleased to see that the patients and families felt that they had more ownership over their asthma management when practicing as-needed treatment.”

In the U.S., about 6.2 million children under age 18 have asthma. Among white children, about 7.4 percent have asthma. Among African American children, that statistic is almost double, at 13.4 percent. According to the Allergy and Asthma Foundation of America, asthma attacks account for 1.8 million emergency room visits per year, and African Americans are three times more likely than average to be hospitalized due to asthma.

The study was conducted by primary care doctors at multiple pediatric practices throughout the St. Louis area, suggesting the strategy is widely applicable in a primary care setting and not just effective when implemented by researchers at a single academic medical center.

Past clinical trials conducted in the highly controlled settings of academic medical centers had suggested that the medication-as-needed approach worked just as well as a traditional strategy of daily scheduled steroid treatments with a rescue inhaler as needed. But how well that strategy might transfer to individual community medical practices had been an open question. Not only is this alternative, as-needed, symptom-based strategy effective when administered by the children’s primary care doctors, the researchers found that approach reduced the amount of steroid medication the children took monthly by almost 75 percent.

The study included 206 African American children 6 to 17 years of age with mild asthma that was adequately controlled with asthma controller steroid medication. Participants saw their own pediatricians at 12 primary care providers throughout St. Louis. The patients were randomly assigned to one of two groups. Each participant in one group was advised to take a dose from an inhaler containing the steroid beclomethasone as needed when symptoms arose, along with the rescue bronchodilator albuterol. Symptoms that might prompt the use of medication include shortness of breath, tightness in the chest, coughing, wheezing and difficulty performing physical activities.

Each participant in the second group was advised to take a specific inhaled dose of the steroid beclomethasone daily, regardless of symptoms, plus the rescue bronchodilator as needed in response to symptoms, as has been the standard recommendation for almost 30 years by the Global Initiative for Asthma guidelines.

At the end of the one-year study, the researchers found no differences between groups in surveys of how well the patients’ asthma was controlled, as well as no differences in breathing tests that measure lung function. There also were no differences in the number of participants who sought extra medical care — such as office or emergency room visits — for asthma attacks.

As might be expected, the group taking daily beclomethasone, an inhaled corticosteroid, used more of the medication per month than those in the symptom-based group. On average, children in the daily-use group used 1,961 micrograms per month, while the symptom-based group used 526 micrograms per month, cutting the amount of this medication by almost three-fourths. The reduced amount is desirable, according to the investigators, because steroids have side effects that include stunted growth.

“Many families are concerned about the cost of this medication as well as the growth-related side effects, and stop taking their steroid medicine altogether. So it’s nice to show that less medication — used as needed — is just as effective,” Sumino said. “This as-needed steroid plus rescue albuterol strategy is now recommended in the Global Initiative for Asthma guidelines as one of the options for the treatment of mild asthma. Given the result of our study and others, primary care doctors may tell their patients with mild asthma that they have an alternative effective strategy other than taking the inhaled steroid every day, if they prefer not to do so.”

The researchers also noted that children and caregivers in the group taking medication as needed reported that they felt they were actively managing their asthma care rather than passively relying on doctors’ orders. The symptom-based strategy, in other words, gave them a sense of ownership over their asthma management, which is important in the long-term control of the disease, according to the Sumino and her colleagues.